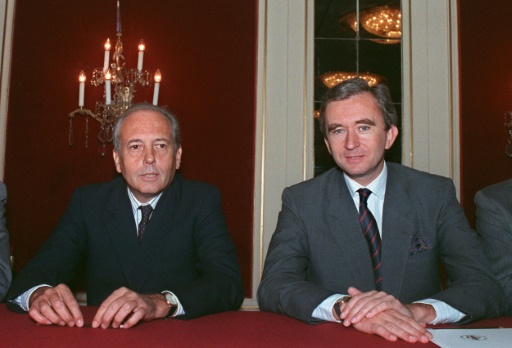 Photograph of the archives of September 22, 1988 showing Alain Chevalier, one of the two founders of LVMH, alongside Bernard Arnault, current owner of the luxury group. Alain Chevalier died in the 1st nPIERRE GUILLAUD

Alain Chevalier, one of the two founders of the world leader in luxury LVMH, died at the age of 87, the Elysee said on Sunday. This captain of the industry made a champagne house, married to the Louis Vuitton company, an international group focused on luxury.

Chevalier "put his intelligence and talent at the service of politics and industry, contributing his vision and his determination to install France first in the field of luxury," he said in a statement to the presidency. of the Republic that hails him as a "visionary man".

The French luxury giant, now comprised of 70 homes employing 150,000 people worldwide, hailed the "memory" of a "big industrial" in a message to AFP.

In his notebook on Saturday, Figaro said that the death occurred on November 1 at his house in Megève (Haute-Savoie).

His funeral will be celebrated on Wednesday afternoon in the Basilica of St. Clotilde in Paris, the family says.

Born on August 16, 1931 in Algiers, where his family has been settled since 1880, this "black foot of Algeria, remained faithful to the memory of his homeland", according to the Elysée, studied law and political sciences before joining. ENA ("Vauban" promotion), where it was formed in 1959.

Auditor of the Court of Auditors, held several positions in ministries (Algeria Affairs, National Education, Industry) before leaving the administration to engage in the private sector.

In 1970, he took over the general management of Moët et Chandon, then the first French champagne group, with the aim of gradually transforming this old house into Reims into a luxury goods company with a global vocation.

From acquaintances to acquaintances (Hennessy cognacs, Christian Dior licensed perfumes, Roc labs), it transforms the home into a model of growth and management.

In 1987, to oppose a possible takeover bid for the company, which became Moët Hennessy, he merged with another luxury giant, Louis Vuitton, then chaired by Henry Racamier, who died in 2003.

But this marriage seems like the end of the career of this pure manager. In fact, Alain Chevalier never had any action, either in Moët or later in LVMH.

Absent from the capital of LVMH, he could not stop the progress of Bernard Arnault, who gradually becomes the largest shareholder.

His job was management. "I did not work for several weeks as the problems between the shareholders were great," he says at the time of his departure in 1989. "There has been an era of managers.

Moët Hennessy and Louis Vuitton, "which have already brought some of the most prestigious brands in the areas of wines and distillates, fashion, perfumes and cosmetics, are wonderful ambassadors of elegance and quality.

But, the presidential statement says, "he was above all a man of culture and freedom, faithful not to a man or a party, but to what he believed to be true and true."

From 1979 to 1981, he sits in the CNPF, the ancestor of Medef, but refuses to take the boss of the French employers, just as he said not in 1986 to the position of Minister of Industry, offered him by Jacques Chirac, his colleague of class. AND ON.

Between 1989 and 1991, he presides over the fashion house Pierre Balmain.

Passionate about Roman antiquity, Alain Chevalier was married and had four children.