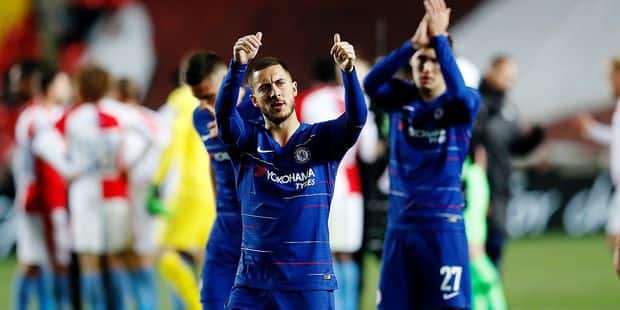 
Eden Hazard should once again begin the meeting at the bank.

Winners by the slightest difference last week on the lawn of Slavia Prague (0-1), Eden Hazard and his team are very close to the last four. But also the record of invincibility of Atletico Madrid. Between November of 2011 and October of 2012, the madrilenos chained fifteen games without defeat. The Blues have fourteen so far and have not lost since April 2013.

This will require increasing the level of play that was theirs in the first match in the Czech Republic. Slavia had played skillfully and had several chances. The Londoners have faced all the problems in the world to break the defensive block in Prague. It was necessary to wait for the rise to the game of Eden Hazard and, especially, the impetus of Marcos Alonso in the 86 minutes to explode the lock.

As in the last five meetings of the Europa League, Eden Hazard should start the game on the bench. Maurizio Sarri will probably pitch him when necessary, close to the last half hour, as in the first match.

The only Belgian who should be aligned will be on the Naples side. Beaten at Arsenal (2-0), Dries Mertens and the Neapolitans are facing a wall. They must score three more goals than the English to try to qualify. The task will be difficult, but not impossible. At least if the Italian strikers showed a more conquering face than the Emirates Stadium, where it was not until the end of the match to see them waking up timidly.

So is Arkadiusz Milik, Lorenzo Insigne and Dries Mertens. "It's harder after the first leg, but it's certainly not impossible. Arsenal is not waterproof on defense and has always scored goals on the road so we have to stay optimistic", motivates his coach Carlo Ancelotti who dreams of achieving a rimonta.