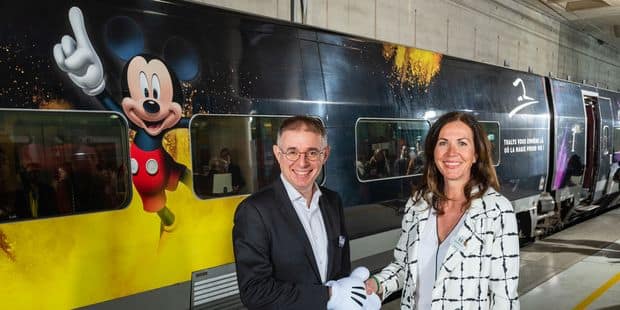 Starting Monday, April 1, Thalys will operate its new Amsterdam-Marne-la-Vallée route, which will include Brussels and Antwerp.

Almost 400 Belgian and Dutch travelers arrived on Sunday at the Marne-la-Vallée-Chessy train station aboard a train decorated with Disney colors and the future worlds of the theme park. During this maiden voyage, travelers were able to view the new link operated by Thalys, officially launched on Monday.

For the occasion, the train was decorated with the colors of the three future new worlds of amusement park. "It is a very leisure and family audience that is directed when the TGV passes through Disneyland Paris. But there is also a more B2B service with the link operated to Roissy Charles-de-Gaulle, an important employment area in the Paris region which includes many nearby businesses., reports the press service of Thalys.

Once in place, Belgian and Dutch tourists enjoyed the many attractions of Disney parks all day before returning in the evening, around 8pm. And from Monday, April 1st, this link will be operated at the rate of two return trips per day and will link Brussels and Antwerp to Marne-la-Vallée at 1:33 and 2:20 respectively. And in both directions, there will be two trains per day. This line serves Disneyland Paris but also the Roissy Charles-de-Gaulle airport, which is in full development and also allows users in the east of the Paris region a direct connection with Belgium and the Netherlands without change in Paris.

"By changing here, travelers can access the TGV and Ouigo network that serves many French cities. We have a target of 300,000 travelers a year", says Bertrand Gosselin, managing director of Thalys.

Thalys now connects directly to Antwerp and Brussels, east of Paris, with two daily return journeys. "With this new service, Thalys wants to enable Belgian and Dutch customers to benefit from direct links and all Thalys services to discover our destinations in the Northeastern Basin of Paris." This extension of our network will also be the means to simplify access to Disneyland Paris and Roissy Charles-de-Gaulle airport to our Belgian and Dutch travelers "he says.

The new service is accessible from € 29 and children under 12 can enjoy a high-speed travel for only € 15 at the Standard.
"Receiving Thalys for Disneyland Paris is a real asset to our park, this direct connection from Antwerp, Brussels, Rotterdam and Amsterdam allows us to be closer and closer to our international clientele"says Isabelle Willemsens, Director of the Benelux Country Walt Disney Parks & Resorts.

Schedules from Amsterdam to Marne-la-Vallee