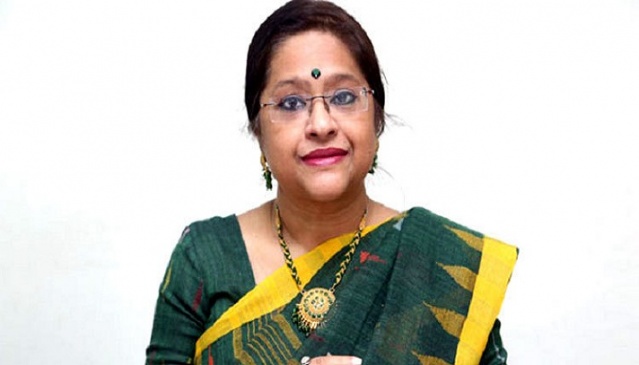 Attorney Barrister Tureen Afroz, who was tortured to return home, his mother Shamsun Nahar Taslim called for the intervention of Prime Minister Sheikh Hasina. He claimed that he was expelled from the house due to obstruction of immoral and relentless activities Of Barrister Turin.

On Thursday, Samsun Nahar Taslim complained to the press conference organized by the Law Reporters' Forum (LRF) in the Supreme Court on law, justice, human rights and constitutional journalists. The younger brother of Turin Afroz, Shahnewaz Dewar, was also present at the press conference.

Shamsun Nahar Taslim said: "Today, for two years and three months and nineteen days, I left home." Twenty-eight days after my husband's death, Turin drove me out of the house. For example, I used to rent our tenants' rent, since my husband retired, our family, the cost of the house, is spent on the rent. Afroz) takes the rent home.

The mother of Turin Afroz said: "The guards and tenants complain about the arrival of strangers in the house at night at home, with almost all of them (fights). The RAB and the police alerted them on behalf of these officers and said they are all his friends. If we say something, we are afraid to be arrested under section 57 I do not understand the genre. More than that, I will bring you from where I live. And scared of your sniper. The village house can not go to Nilphamari, where he took the land and the houses in his name.

Shamsun Nahar Taslim said: "I do not meet the prime minister to talk about it. I thought he was a mother. We know that he will not tolerate transgressions. I want PM intervention I want your cooperation through the media today. My body is very bad 65 percent of kidney failure … (crying). Together with diabetics again. He also got the money to buy a house, he also took the money. There is no place in the country here. Why should I leave my country and stay abroad at this age? This country is my birthplace and my 48 year old family. I want to stay here. I want to go back to my home country. I want the Prime Minister's intervention for this.

Tareen Afroz's younger brother, Shahnewaz Shishir, told the press conference that "the Barrister Tureen Afroz has threatened and harassed me and my mother widowed the power.The motive is one.And this is to make our wealth in the country I kept the subject of the eye to shame.Me and my non-partisan mother did not want to insult anyone in power.

Shahnewaz Shishir also said, "After leaving us as a Bangladeshi citizen, I will regularly pay tax and land taxes for the RAJUK. However, in my absence, Torino Afroz used to exploit power and forced the administration to work outside the Barrister Turin is not just in Dhaka, Nilphamari kept the owners of our cousins ​​and sisters hostage. "In this situation, the intervention of the prime minister demanded that we return home.

On June 13, a general diary (GD) was opened against barrister Turim Afroz at the Uttara police station in the capital on charges of not letting him into his home, his younger brother Shahnewaz. It is mentioned in the GD that Tureen Afroz, who lives in the restaurant's own building, is a resident of Canada. Some years ago, Turin gave his mother out of his house. Later, the mother went to Canada with dew. On June 13, when he returned from Canada, Sister Tureen Afroz did not allow him to enter.

Earlier, on behalf of Brother Uttara, the multi-story house was delivered to the mutineer last year by Tureen Afroz. That year, Turi and Shishir's mother, Shamsun Nahar, filed a complaint against her daughter.

The younger brother of Turin, Shahnawaz Ahmed Dishi, filed suit in the Dhaka court for possession of the occupied house.