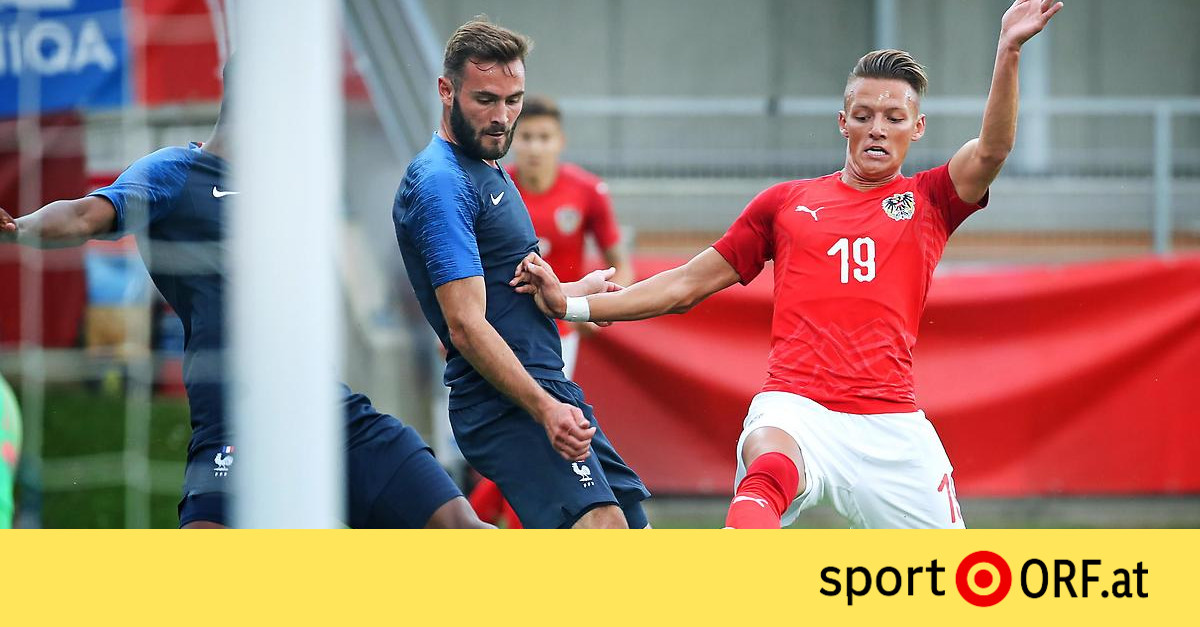 The winner of the Austrian game, who made his European debut against Serbia in Trieste on June 17, was Salzburg striker Hannes Wolf with two goals (21.58) – the third was led by Husein Balic (85). Jeff Reine-Adelaide (57) looked after the French in the meantime.

ÖFB players now have the next two days off and meet just the Friday before the adoption of each other again. Then there are the three players Xaver Schlager, Philipp Lienhart and Stefan Posch for the troupe, who have recently been on team A for the European Championship qualifiers against Slovenia and northern Macedonia.

Paul Bernadoni, the goalkeeper of the French side, served the ball to Hannes Wolf but the Salzburg striker did not ask twice and swung thoughtfully to 1-0 for the ÖFB selection.

Strong front and back performance

Austria started strong, was defensively well ordered and advanced dangerous. With a quick combination of football, he went a couple of times in the penalty area. French legionary Adrian Grbic (6th) tested opponent Paul Bernadoni in the sixth minute with a direct win. In the tenth minute Mathias Honsak put the ball a little too far.

After a Bernadoni gift, the result was 1-0. Wolf unexpectedly entered the great area for the ball, let Bernadoni leave with a dribble and then concluded with the left deliberately. After the interval, France made first for Reine-Adelaide (57.), but in exchange Wolf rolled the ball after a pass of Sasa Kalajdzic to 2: 1 in the empty goal.

In exchange for equality, Wolf regained the lead for Austria with his second goal. 2: 1.

The French had a great chance to make up, but they lost a bit of luck. Substitute Balic, who skillfully completed a solo race, sealed the defeat to the favorites. Gregoritsch made a total of ten changes before, except for third goalkeeper Johannes Kreidl, all eligible and present players were used.

On the left side, substitute Husein Balic entered the big French area and closed 3-1 for the Austrians.

France were ÖFB's third-best contender in 2019 on their way to the U21 European Championship's first participation in the association's history. On 21 March, the Austrians won in Trieste against Italy 0-0, four days later, in Algeciras against Spain 0: 3. European opponents next to Serbia in the group stage are Denmark and Germany.

It is not clear how Sandi Lovric will continue. The Sturm Graz midfielder suffered a thigh muscle injury in training, his use in the European Championship is questionable. In case of proven injuries, the substitutes can still be indicated until the beginning of the tournament.

Voices for the game

Werner Gregoritsch (Austria coach): "The team played what they trained and I think we played in a clever and tactically disciplined way.I'm very happy.This is a small indication in the direction of EM.It is important that we know we can do something.Husein Balic showed in training, he absolutely wanted to join the European Championship. That is an example. "

"Everyone has played well today, no one has fallen, I think we have to be humble, we still know we are little Austria, we know we need to keep working, it starts naturally at zero for all teams, I think we are going to Italy now with a good feeling. A good thing would be a playoff against Germany. "

Hannes Wolf (two goals): "The goals were a little strange, we were very good at pressing today, always ready for each ball played." It was a friendly game, both teams were a little tired from the training week that was now. We're not going to Italy to go on vacation. "

Yellow cards: Danso, Ingolitsch or none