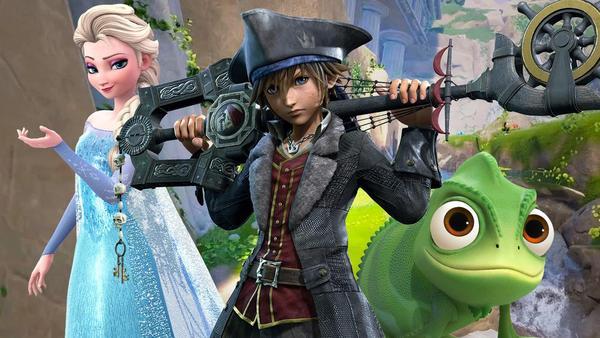 A practical look at the worlds Pirates, Tangled and Frozen.

It is strange to think of my expectations of something that I have waited consciously and not for more than a decade to play. I thought a lot about what I expected to see Kingdom Hearts 3, when I played back in June, and for the most part, delivered on their first impression. Seeing three more levels of Kingdom Hearts gameplay in a hands-off show, I'm even more impressed by how well the long-awaited sequel not only continues to live up to my expectations but also surprises me in a charming way.

(These impressions are spoiler-free – as I know many fans of the series, like me, are wary of leaks related to Kingdom Hearts 3, this preview does not have significant story spoilers, and only briefly details a battle against a boss.)

A pirate's life for me

Entering, I had the least enthusiasm to see the Port Royal of the Pirates. I worried about its realistic appearance compared to the other worlds, I have no appreciation for the franchise level in Kingdom Hearts 2 and lost interest in the franchise of the film thanks to its quality decline.

And I'm very happy to say that Port Royal, acting as a mini Assassin's Creed IV: Black Flag, seems to be one of Kingdom Hearts' most intriguing levels.

Port Royal offers land, air and sea combat (both naval and submarine), but its coolest aspect is your ship. Sora, Donald and Goofy make up their own lovely pirate crew, sailing the seas in search of treasures. Sora can jump off the ship at any time and explore several islands populating the sea. The treasure can also be buried beneath the surface, but each small island can hold its own secrets worth exploring.

The setting for this world enchants me positively. Although hardware limitations are understandable, most non-console franchise entries have moved away from the lightweight platform that encourages exploration in the same way as numbered entries. This level allows an incredible level of elimination, and although we have visited only a few islets, I can not wait to search above, below, and around each one.

Traveling on your ship, jumping into the water and then running to the land seems like a continuous process, with underwater journeys far more agile than in the Kingdom Hearts games. You are also not stuck in aerial fighting – witnessing the steampunk bird's chief battle seen for the first time in other trailers, you can jump from one soulless to the next to have better views.

Because of its depth of variety, Port Royal also offered a great chance to see how combat mechanics can change from one world to another. The special bomber attack of the Goofy, when thrown against a heartless Beetlejuice sand worm, does not only hit the enemy. The goofy is swallowed by the beast to attack from within. (It's best not to consider what Goofy's head is going through at these times, especially when Sora does it several times.)

Likewise, magical attacks like Blizzard, Thunder and the new Water spell behave differently underwater than in salty air, and sea fish can be collected to bring Remy (from Ratatouille) to his restaurant in Twilight Town .

The ambition of the level surprised me, and I hope its potential for exploration is accompanied by a rewarding world worth investigating.

Warning – This section briefly discusses a battle against the boss of Kingdom Hearts 3. If you do not want to know about the battle (no mention of significant elements of the story, please), skip to the next section.

One of Arendelle's centerpieces also quieted my question about whether Kingdom Hearts 3 will feature some of the epic long battles that the franchise included before. Sora, Donald, Goofy and Marshmallow faced a giant wolf that looked like ice-covered Fenrir during our demonstration. (Yasue told us that the development team worked together with the Frozen team members to invent the enemies to keep them faithful to the world of the modern Disney classic.)

The wolf was healthy enough to last at least a wintery or two in Arendelle, with a horde of ghostly mini-wolf heads to help in battle from time to time. Oh, and that could turn into a black sun, which Marshmallow would need to avoid crushing everyone.

I love some of the greatest battles in Kingdom Hearts, and it's good to see that the scope being used in the levels generally also applies to these encounters. Even a quarrel with a handful of Arendelle Heartless, who behaved differently in the air than on land, looked like a battle the size of a boss thrown into the middle of the holding.

As with the Naval Battle of Port Royal or the Toy Box Giga Mechs, Arendelle's great mechanical trick is the extreme downhill sled, the closest you'll probably get to a Kingdom Hearts eSport. Yasue showed us one of the first sections of sleds, a massive and surprisingly long portion that offered several branching paths and treasures to collect along the way. The section seemed a little too long for how sparse the mountain seemed-it is not clear whether the challenge will increase or whether there will be more to discover along the routes, but at the very least the hills of Arendelle are a beauty to slip through.

Tangled's display was decidedly less flamboyant than Frozen or Pirates, but it showed how the little details make Kingdom Hearts 3 a more robust experience than its predecessors.

The first level we were shown of the demonstration, the scenes in Corona that we naturally watched were for exploration. All the minor characters – Rapunzel, Flynn, Donald and Goofy – began to explore the forest by themselves while Sora was idle for a moment. And, more pleasantly, the interaction with small fragments of the environment resulted in funny and interstitial scenes.

Given that Rapunzel did not enjoy the everyday aspects of life we ​​are accustomed to – well, "accustomed" if we live in a fairytale forest setting – throwing Aero on a lion's nest causes tufts to fly to the sky, Sweet scene with Rapunzel. Likewise, she will flee by herself to a nearby lake, and after her unleashes an interaction between her and Sora on the delights of the world.

Yasue said that finding and activating those moments builds rapport with Rapunzel, although it is unclear how this will be brought to the level as it progresses. Following Rapunzel on these intriguing flights occasionally led to additional combat scenarios and treasure opportunities, appreciably adding some character building this exploration.

The Corona fights, especially in the hands of Yasue, also showed the variety to fight. I've talked about the many systems up and running in Kingdom Hearts 3 at E3 2018, and how to use them in concert takes some getting used to. But with a little practice, they become a crazy ballad of huge household items that pass through the air and Disney characters throw themselves into bandits. Some of Corona's enemies also had armor instead of HP at first to reduce, while the designs of some of the most Heartless humanoids in this world, along with Arendelle's ice dragons, showed how much variety there would be for enemies. (As someone who has bent over Kingdom Hearts bestiaries in the past, this perspective makes me very excited.)

Our Kingdom Hearts gameplay demos focused on just that – the gameplay. I can not talk about how well the world's stories unfold, nor how the comprehensive narrative fits into them. But the three brief bits of gameplay renewed my excitement over the sequel. I sincerely hoped to enjoy it, but I know very well what the demos would hold.

Fortunately, I was proven wrong. And now I do not know what to expect from the release of Kingdom Hearts 3, and that makes me more excited than before.

Jonathon Dornbush is the news editor for IGN, PlayStation leader! And beyond the host of IGN. Talk to him about your KH3 experience on Twitter @jmdornbush.