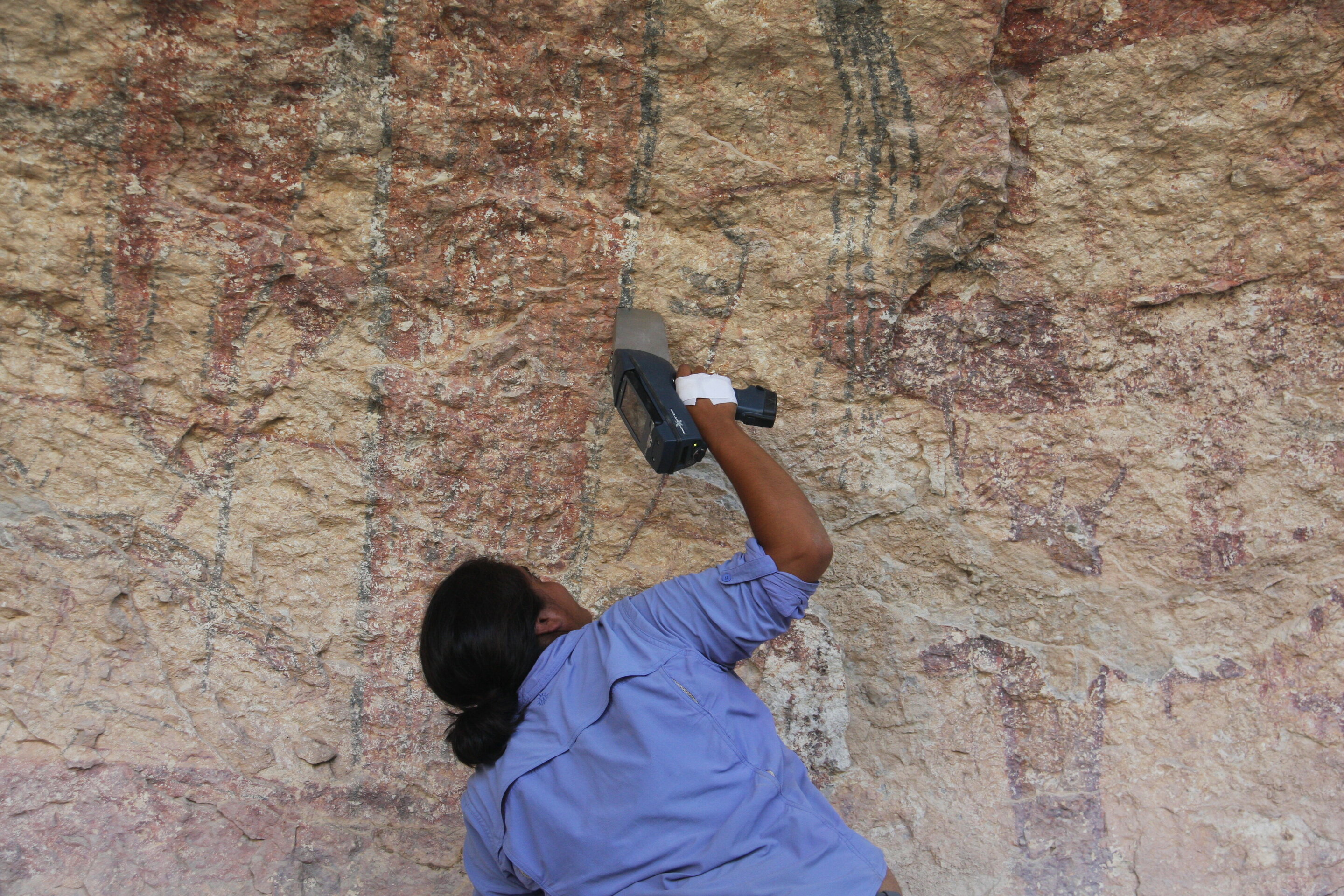 Prehistoric rock paintings are a source of fascination all over the world. In addition to its beauty, there is a deep meaning in these traits, which depict ancient rituals and important symbols. To learn more about these murals, researchers have historically resorted to sampling methods that are detrimental to the work of art, contradicting the archaeological principles of conservation. Today, scientists report the use of "X-ray vision" to gain new insight into the layers of paint in rock art in Texas without unnecessary damage.

"In this particular work, we use a technique called portable X-ray fluorescence spectroscopy (pXRF) in which a portable instrument can be transported to a location and used right there on the spot," says Karen Steelman, Ph.D., who led the study. "It gives you elemental analysis of a specific material and is the first step to discover how ancient artists used different materials to make their paintings."

Steelman's research focuses on the analysis of rock art and caves, particularly at Pecos Canyonlands in Texas. She and her colleagues at the Shumla Archaeological Research and Education Center have previously analyzed the composition of pigments at more than ten sites in the region but could not see the picture of how these pictograms were composed. Other methods of pigment analysis, such as inductively coupled plasma mass spectrometry, require a sample of the rock art in question, which results in site damage, and field microscopes are unable to detect layers of paint in a complex mural.

For this particular study, Steelman and his colleagues visited the Rattlesnake Canyon site along the Rio Grande, known for its variety of pictograms. Using a 105-foot wide mural as a test screen, they used pXRF to measure 138 areas where the composition indicated superimposed pigments of red, black, white, and yellow. In addition, measurements were taken at 90 locations of unpainted limestone, which provided information on the composition of the geological screen.

Using the large amount of data collected from the Rattlesnake Canyon, the team could determine a pattern for the pigment layers as well as their elemental composition. The measurements of pXRF revealed previously invisible layers of black pigment under layers of red, which were made with manganese and iron oxide, respectively. These complex layers of pigment indicated a level of sophistication seen elsewhere in the Lower Pecos, which ethnographers determined as a series of religious murals that revealed the complex nature of the hunter-gatherer society that occupied the region from 2500 BC to 500 CE.

In addition to her findings on the composition of the pictograms, Steelman, along with other Shumla collaborators, Victoria Roberts and Carolyn Boyd, Ph.D., found that the site appeared to contain firearm damage. To confirm their suspicions, they turned back to the pXRF to identify any trace elements that might have come from the ammunition. "Unfortunately, we often see suspected bullet impacts on rock art sites," Steelman says. "Most of these are older types of vandalism from the early 1900s, and we used portable radiography to determine which trace elements were present." At the sites of impact, pXRF revealed traces of lead, mercury and selenium, which were not present in undamaged areas. There is a positive side to this discovery; finding damages at archaeologically significant sites is an opportunity to petition state and federal agencies for conservation funds to be used for more extensive preservation measures, Steelman says.

With more than 350 known rock art sites in the Lower Pecos Canyonlands, Steelman and his team plan to continue using pXRF to see the full picture of tapestry of color and symbols woven throughout the region. Flooding along the Rio Grande is a major threat to what researchers describe as "the oldest books in North America," and they are on a mission to document and analyze as many sites as possible to preserve these stories for the future generations.

Provided by
American Society of Chemistry