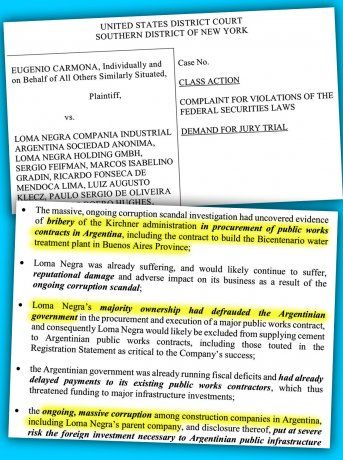 The arguments against Loma Negra brought before the courts are very difficult. In the first paragraph, we refer to "bribes paid during the Kirchner government to obtain public works contracts in Argentina, including the construction of the Bicentenario water treatment plant in the Province of Buenos Aires." The mention refers to the "Del Bicentenario" sewage treatment plant, located in Berazategui, inaugurated in 2014 and defined by the previous government for the most important sanitation works in Argentina and one of the largest in the world. According to the presentation, he suffered "reputation damage" and an "adverse business impact" due to "corruption cases in progress" in reference to the Cuadernos case. According to the presentation, the cases of "massive corruption", where the "mother company of the Loma Negra" is included, today put in serious jeopardy the validity of public works for the necessary infrastructure for Argentina. He mentions the judicial presentation that the presence of Loma Negra in allegations of corruption will cause the company to be excluded from future public works contracts.

In addition, and within financial risks, the complainants mention that Maurício Macri's government policy of severe fiscal adjustment fueled by the economic crisis has led to delays in payments to public works contractors (something that is not really happening.) That would affect everything the construction market, including the Loma Negra.

This presentation is added to a previous one last July when other stockholders in the midst of the financial crisis and before the bursting of the "notebooks" case alleged before the same courts in the United States for not having anticipated the consequences of the Argentine financial crisis in the shares of the company in New York. And that during the presentation of the IPO was not advised of the placing banks (J.P.Morgan and Alaria) on the weakness of the fiscal situation of the country and the proximity that the Argentine public accounts had of a possible default. The presentation, at that time and with these arguments, was initially judicially and financially unfounded. In short, according to the jurisprudence of capitalism, losing money through a structural and exchange crisis is within the essence of capitalism. However, the same argument is what returned this week, but aggravated by the link of Loma Negra with the causes of corruption linked to public works in the previous government and the negative consequences derived from these events in the value of the shares. This would have violated the laws of public ethics and, consequently, undermined shareholders' equity. The crisis and the lack of anticipation of the banks would only have aggravated the situation.

The Discord's IPO had been released in November 2017 in a roaring act on Wall Street. For this operation, the cement owned by Camargo Correa's Brazilians raised about US $ 980 million. At that time, Sebastian Maril, an analyst at Research for Traders, warned that "this judgment opens the door for any shareholder who initially bought shares in an IPO last year or earlier and their underwriters failed to" anticipate "the Argentine economic situation and the Decisions of the government in the construction sector (cited in the process) commence similar actions against other companies. "

The issuance of the IPO corresponded to approximately 50,200,000 ADSs, equivalent to 251 million common shares (US $ 3.80), representing approximately 40% of the total value of the company. The explanations that Camargo Correa had mentioned in the placement were that this money would be used to finance capital investments in Argentina. Loma Negra is the country's main cement producer, dominating 45% of the market.