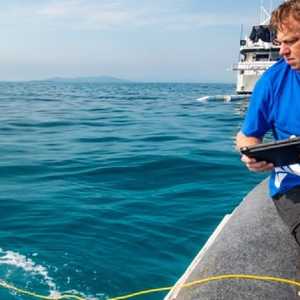 A GOLD COAST scientist spent the past month "sowing" the Great Barrier Reef in a worldwide project to regenerate the global treasure in the wake of consecutive years of coral bleaching.

Coinciding with this year's mass coral spawning event on the reef, the team of experts used pioneering methods to collect coral larvae, re-creating them indoors on the reef.

A specially designed "underwater agricultural duster" called LarvalBot was then used to disperse juvenile coral into areas hit by wild whitening events that killed about half of the reef last year, according to experts.

In recent years, Prof Harrison has developed the technique of breeding and growing 1 mm long larvae to reproduce corals the size of dinner plates on reefs damaged by dynamite fishing in the Philippines.

Professor Harrison, who discovered Lismore – who discovered coral proliferation on the Great Barrier Reef in the 1980s – said coral reefs this summer could give the regeneration project a chance to succeed because they would be more resilient.

"And therefore they are the ones who really need to catch the seed because they will give us larvae that give us a fighting chance to overcome the problems of rising sea temperature and mass bleaching events."

He said the technique has "enormous potential" to operate in large sections of UNESCO's World Heritage Site.

"We will be closely monitoring the progress of newborn corals in the coming months and working to refine both the technology and the technique to further expand in 2019."

Professor Dunbabin designed the QUT RangerBot, designed to help control the Crown's crown of thorns, which gently releases larvae into damaged areas of the reef, allowing it to settle and develop into coral polyps or baby corals.

With a current capacity to carry around 100,000 coral larvae per mission, there are plans to scale up to millions of larvae.

Anna Marsden, director general of the Great Barrier Reef Foundation, said of the project: "It's exciting to see this project move from concept to implementation in a matter of weeks, not years."

"The recent IPCC report highlights that we have a very short window to act for the long-term future of Recife, underscoring the importance of seeking every opportunity to give our reefs a fighting chance."