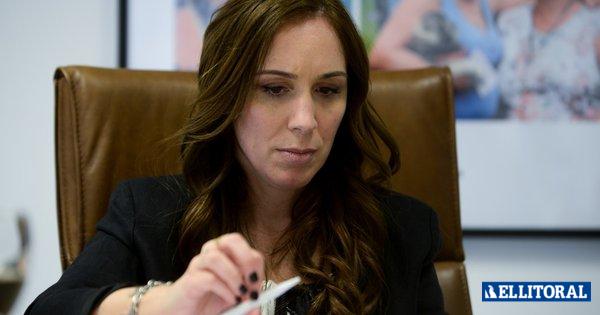 The governor of the province of Buenos Aires, María Eugenia Vidal, assured that the lists of candidates of the party in power and the electoral calendar will be defined "after March" next.
"The most important candidacy is that of Mauricio Macri and it has already been defined.The rest of the candidacies and the electoral calendar is a discussion for next year.Not on the agenda of the people or mine," he said in interviews published by the newspapers La Nación and Clarín.
Vidal made the remarks after a week in which he speculated about an early election in the province of Buenos Aires.
He insisted that Macri "needs to be reelected" and that, in turn, will fulfill the commitment with the people of Buenos Aires to "not be a candidate for president next year."
"The people of Buenos Aires know that I have defended them all these years and will continue to do so. In addition, I will fulfill the commitment I made with them and that no other governor has assumed: not be a presidential candidate next year," he said .
In addition, he avoided commenting on changes in the electoral calendar in the province of Buenos Aires.
He noted that "all options are open and possible," although he clarified that "it is not yet time to discuss them" because "today's elections are not on the people's agenda" or even hers.
According to Vidal, the strategy of the electoral calendar and the candidacies is something that will be solved "with the president, with the national government, in the area of ​​Change as in 2015" and there will be no "at least until March" definitions.
"The candidates are not defined by politics, but by the people," she said when questioned about the possible candidacy of former president and senator Cristina Fernández de Kirchner and whether that would benefit the government of Buenos Aires. "Today there is a sector of society that wants Cristina to be a candidate and independent of what one thinks," as "there is a sector that wants Mauricio to be a candidate."
For the governor of Buenos Aires, "there are no support devices, assemblies or meetings that define them." It's society. "
He considered that Cambiemos continues to express "what the Argentines wanted in 2015 and what they still believe, even with errors and successes and with everything that remains to be done" to achieve "an Argentina without lies, without corruption, with real works and not with posters ".
"If anything was clear in those years, Cambiemos has no one to decide and others will applaud the Casa Rosada," he said.
"We all have the ability to discuss, increase differences and reach agreements," Vidal warned.