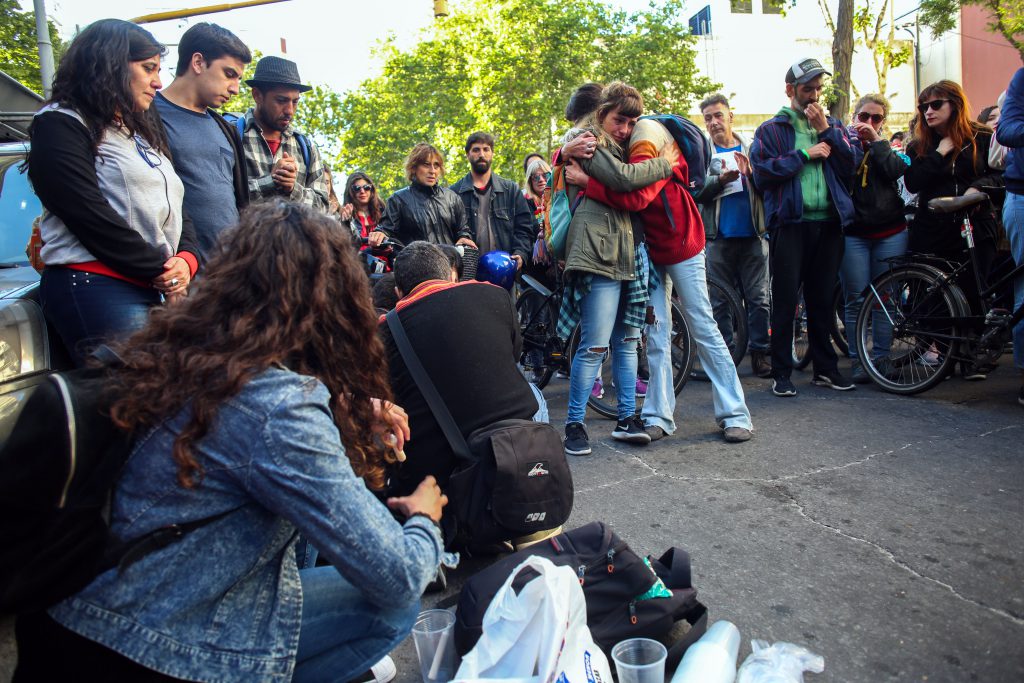 "She was loved by all and this proves it." Damian, brother of Estefanía Moreno, summed up in few words the meaning of the numerous bicycle ride that was held today in memory of the young woman who died after being hit after trying to avoid an unprotected car door.

Remembering Estefanía, sensitizing motorists and cyclists and asking for the construction of bike lanes were the slogans of the convocation that took place in Miter Square. There were hundreds of people of all ages who joined the proposal launched by Estefanía's friends and colleagues.

With the tragedy still brutal (happened on Wednesday), there was a noticeable emotional load on the bike ride. Estefanía's family participated and the arrival of the parents to the place motivated a closed applause and signs of respect.
"Estefanía Moreno, present," was the cry before the beginning of the tour that was made by Irigoyen, to Luro and returned by Miter to Miter Square. In Belgrano and Irigoyen, instead of the accident, a stop was made and an artistic intervention was made on the spot.

"This can happen to all of us, that's why we came. We use the bike to work," agreed Alejandra and Adriana, one of the first to arrive at the call.

For his part, Mariano did not hesitate to participate since he suffered a similar accident. "It happened to me, in Luro and Jara they opened a door and I fell in the middle of the avenue. No one was coming from a miracle," he recalled. "You need to raise awareness in cyclists as well," he said.

Monica, an employee at the María Auxiliadora school, recalled the accident of Lautaro, a 17-year-old boy who, when struck by a car door, suffered injuries he still could not recover. "They destroyed the trachea and could not rebuild it," he lamented.

Estefanía was a theater teacher and her colleagues could not hide the pain. One of them was Paco who asked to "become aware". "There are many accidents that, being avoidable, have to serve to reflect," he said and questioned "how resources are often allocated." "Until recently they wanted to make the Metrobus that costs a fortune and you can not do a bike path," he said.

In turn, Marcelo Barbieri stressed that it is necessary "to generate awareness among us". "I think drivers will not change, so we have to move," he added.

The cyclist commented that "the accident of this girl made us come together". "The important thing is for people to become aware and to know that we are vulnerable," he said.
In tears, Estefanía's mother said that her daughter was taken "without any right", "Please, someone do something," he asked.

Barbieri proposed donating a white bicycle to hang where the accident occurred. The "white bicycle" is a symbol used in many cities around the world to remind cyclists that they have been victims of traffic accidents or robberies while riding the bike path.

Estefanía Moreno, 28, died on Wednesday after being hit by a truck in Belgrano and Hipólito Yrigoyen. The driver of a car that was parked opened the door and hit the victim, who wanted to avoid the coup, but could not. After that, the young woman fell on the asphalt and was run over by the older woman, who was walking down the street a few meters away.

The Office of Unjust Offenses led by Pablo Cistoldi, in charge of the case, ordered the two men to accuse the two men: the one who drove the truck that ran over the victim and the one that opened the door of his parked vehicle, within a cause categorized as "manslaughter".