Presenter Samantha Heathwood, a reporter for the Australian News Network 9 News, used during the broadcast of the program a striking neckline that exploded the laughter to the Social Networks.

Many users of the Social networks they noticed a very particular detail of a cleavage who looked like an Australian presenter.

Cybernauts made fun of the jacket that Samantha Heathwood He used it Wednesday during the live broadcast of the 9 News news channel Nine Australia.

For many, the neckline was similar to a penis, including the testicles. In addition, a Twitter user, realized that a few years ago another presenter wore the same coat and posted a mocking meme of the journalists.

"Confirmed: the 2016 penis jacket is still alive!", the user wrote in that image and then added: "Probably someone in the wardrobe department said," It's been a few years, no one will notice ". 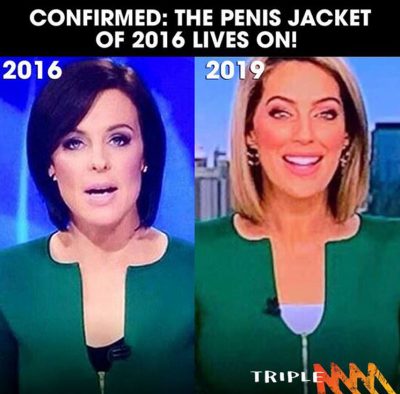 Heathwood indicated by a "story" in your account Instagram, who realized what was happening thanks to the thousands of messages he received. She also pointed out that no one on the channel forced her to wear this piece of clothing and that she chose it herself, assuming that viewers had already outdone what happened in 2016.

Far from being angry, the hostess caught up with great humor and joked that she would sell the jacket: