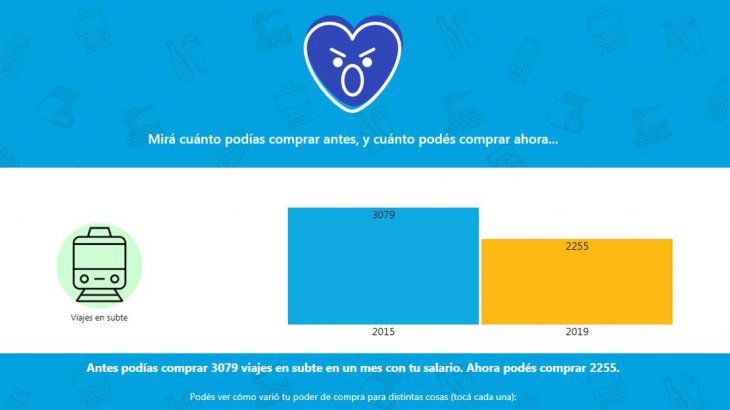 Like this, the loss of purchasing power of Argentines has become one of the main themes of conversation in family tables. There are few who still remember how much they could buy recently.

In this context, a calculator was launched to compare the variation of real wages since Mauricio Macri arrived at Casa Rosada. To verify the loss of purchasing power, the user only has to collect his salary at the end of 2015 and his current salary to compare the overall loss of his real salary by inserting a change in our salary.

In the menu, each user can choose to measure their salary in dishes of pasta, naphtha, subway tickets, hamburgers, beer or liters of milk. The website was developed with official indicators such as INDEC and the consumer price index of the City of Buenos Aires.

The initiative came from the Patria Grande Front that leads the social referent Juan Grabois. The leader himself said that "things increase so fast you become numb."

"The price of bread, pasta, and grass in 2015 would have seemed crazy to us. I invite all workers, from any political inclination, to test their wages and see objectively, according to official data, as their purchasing power has evolved, "said the leader.

According to Itai Hagman, the director of the Observatory of Economic Situation and Public Policies (OCEPP), "Since Macri assumed, inflation has accumulated 189%, above all wages and fixed income. a goal of the Cambiemos economic policy.While they spoil production and labor, they indebt the country to finance those who speculate, the opposite of what they promised in the campaign.