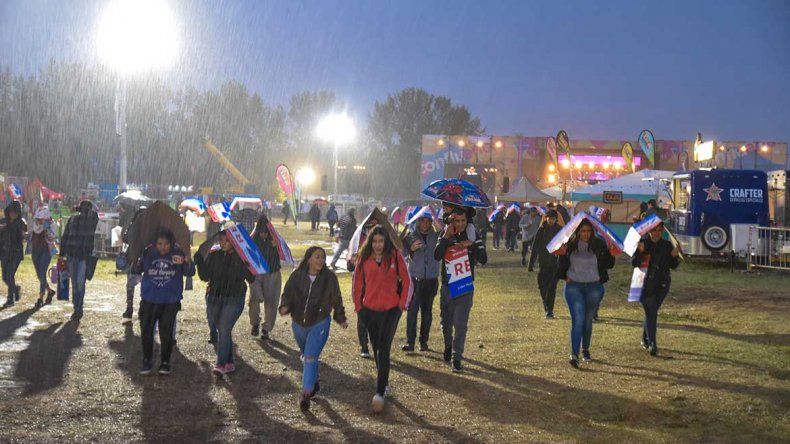 "The rain is deceiving us, we wanted a gold badge for an extraordinary party," said Mayor Horacio Quiroga at the LU5 Oro Trucks mobile studio on the island's 132nd property.

Culture secretary Ana Bonet commented that "the problem is that rain and wind have been combined so it goes straight to the stage and you can not take any risks." "I have a political position and I do not know if next year I will continue, but I am very pleased because it is a party that has been consolidating over the years for all Neuquen," said Bonet.

For the management of Quiroga was the last edition of the party with him as mayor. It is not known what will happen next year, although the authorities want continuity beyond the political project assumed by the intendancy.

"Personally, this edition has a special emotional charge for me because it is the last party that I can enjoy as a mayor. The next I will enjoy as a neighbor or occupy a position of greater institutional responsibility, according to the will of the neuquinos," concluded Quiroga.

"The next mayor, whatever he may be, will have the obligation to continue because the neuquinos have already appropriated the party as a space to celebrate together and in peace," said Horacio "Pechi" Quiroga, mayor of Neuquén, the capital of the country. 170,000 people enjoyed the second night of the party.

"This is a party that transcends the stage, people come from the river with the lounger, walk in the bleachers and there are activities for the whole family.We are happy for the answer," said Ana Bonet, Secretary of Culture and Tourism of the Municipality of Neuquén

The recital offered by Pablo Lescano and Damas Free was impressive. The images of the drone showed more than a hectare occupied by a crowd that happened to enjoy a unique spectacle. The traffic and safety device was special to accommodate so many people. The Municipality recommended not to attend a vehicle for an increasing part.

Activities remained the same on premises prior to suspension

Older people were starting to leave the Isla 132 property as soon as the first raindrops began to fall, after 20:30 yesterday. But many waited in the stands, playgrounds and food stands around the stage. The party continued the same for them.

Among the activities and covered by the acres of the property, there were some neighbors who took the opportunity to take a health examination. This happened at the Leben Health Group booth. Only one day more than 120 people were interested in doing medical check-ups.

Lescano: "Neuquén has given you the best of me.