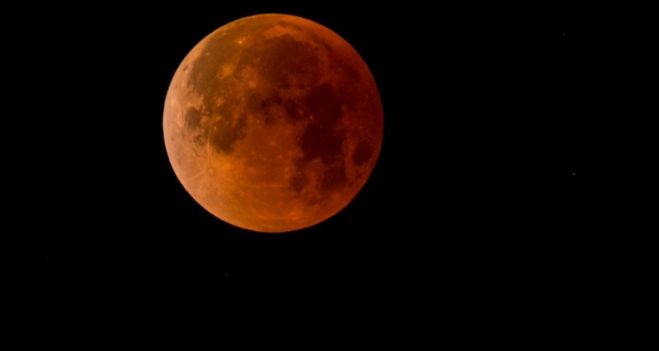 The day has come. Of course only the night is coming. And when it arrives, party: family picnic, 12 free access telescopes, live music, experts helping to understand and, as if that was not enough, prizes drawn by the province's Tourism Ministry for the duration of the phenomenon. This will be the first full moon eclipse of the year in the Plaza del Bicentenario, for which the tourist portfolio has made an open invitation.

San Juan is the most western point of Argentina with a privileged location to observe the celestial phenomenon. That is why Tourism organized this activity, for which complete families expect to go with their chairs or banquettes and matte equipment, since the change in size and color of the Moon can be appreciated for just over 3 hours.

What will be seen is a larger than normal reddish moon, commonly known as Red Moon or "super moon of blood." In this total eclipse of the Moon, the first of 2019, "what happens is that the Earth interposes between the Sun and the Moon, so that the last one enters the Earth's shadow cone." Sun reaches the natural satellite crossing the atmosphere terrestrial, which produces a dispersion and, for that reason, the Moon will be reddish ", explained the astrophysicist Andrea Buccino through the agency Telam.

The invitation to the Plaza del Bicentenario is also a preview of what will be experienced on July 2, when the total eclipse of the Sun occurs, a much less frequent event with strong worldwide appeal. On this occasion, San Juan will also be a luxury gallery to see it, since it will be appreciated in few places in the world. That is why from the Tourism they will distribute leaflets tonight to witness this other phenomenon next winter.

The entire eclipse will be between 23.37 today and 4.48 tomorrow. But as the Moon passes through the Earth-projected shadow cone, it is said to be in the "umbra" phase, and this will happen exactly between 1.41 and 2.43. All this time will be the 12 free access telescopes in the Plaza del Bicentenario. They are contributed by the Felix Aguilar Observatory and the Sanjuanina Association of Amateurs for Astronomy.

As detailed in Tourism, astronomers Eric Gonzalez and Carlos Lopez, of the Felix Aguilar Observatory, will be in the square to clarify the doubts of all who go. Members of the amateur association will do the same. And the observation can not be only by the telescopes, but also installed two giant screens and ran to follow it in great detail through the screen of the cell phone.

Another place considered one of the ideals to see the lunar eclipse today is the Ischigualasto Provincial Park. So much so that the TN channel will broadcast live with a special team from that place. For those who want to go, the cost of admission is $ 350 per person and is entered from 21 tonight. The phenomenon will be observed from the base of the park, in the area from the point of view. Reservations can be made by calling 154570875.