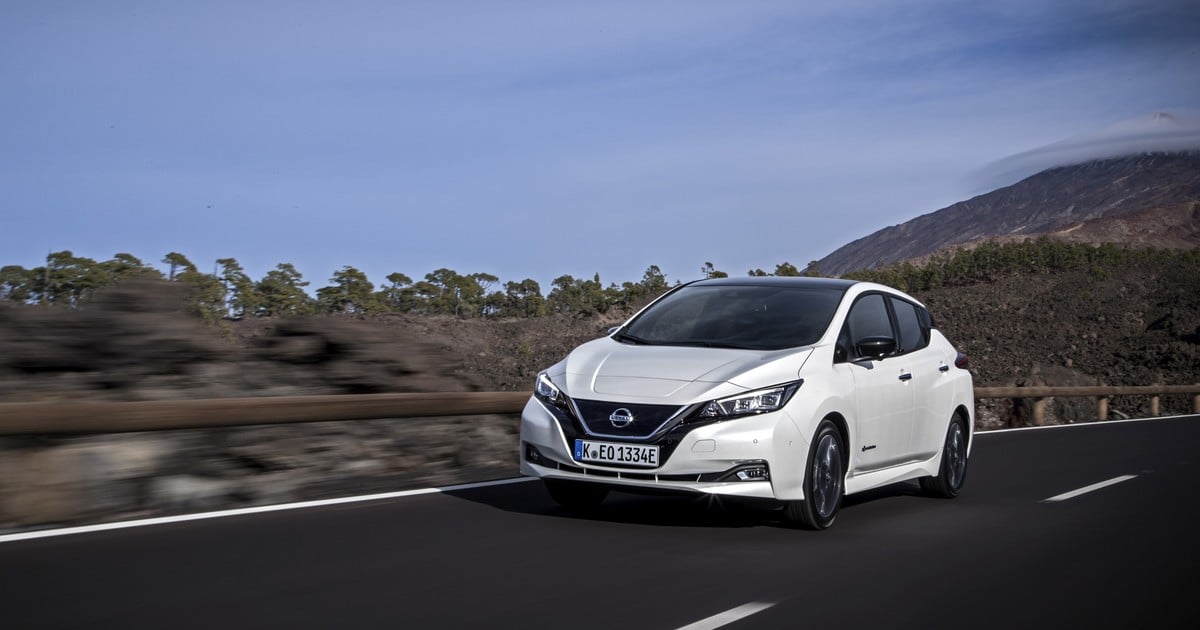 O Nissan leaf It is the best selling electric car in the world and is already available in our country in a single version that costs $ 61,600.

Handling assistance. The Nissan Leaf comes with intelligent cruising speed control, which adapts the speed automatically according to the flow of traffic.

As soon as we saw him and sat behind the wheel, we were presented with the first qualities to stand out from Folha: its design and its quality. It is a modern style hatch or bar, built with materials and a level of termination that will be consistent with a price that, due to its technology, will certainly be high. And as we were using it, the quality of its operation appeared: excellent.

Impress the acceleration. And this is explained because an electric motor has all the torque (the moment of greatest pulling force) since it starts to accelerate. A naftero, for example the Nissan Sentra, which is a 1.8 of 131 HP of power, has a torque of 173 Nm (Newton-meter) of 3,600 rpm. This means that you need to accelerate it until it reaches that rate of revolutions per minute, so that all your pushing force appears.

In contrast, the Leaf's electric motor has 320 Nm of torque from the start. The difference: a sheet accelerates from 0 to 100 km / h in 7.5 seconds; a Sentra, at 10.5. The weakness of electric motors is that the maximum speed is limited so as not to consume battery power quickly.

The Nissan Leaf's battery is located on the floor between the axles, favoring weight distribution and center of gravity, which results in great stability.

If we follow the comparison with the Sentra, we see that with its 131 hp engine it reaches 190 km / h, while the Leaf reaches only 145 km / h. This reaffirms the condition of the urban car.

An electric car in Argentina, for the time being, is intended almost exclusively for use in the city. As its autonomy does not allow to travel more than 300 kilometers without recharging the batteries (the mark declares 380 kilometers, but with an extremely "conservative" handling), and although the service stations do not offer the service of fast loading in the routes, they will be impossible stay far away from the city.

The car can be recharged in the conventional electric grid of any home. This would require about 20 hours to charge the battery at 100%. But you can also install at home a charging device called Wall box (sold and installed by Enel), with which the total battery charge is reached in 8 hours. And the fastest load is what can be achieved on the devices offered by the service stations. With a larger capacity jack (the car has two, one for conventional charging or the Wall case and one larger for quick charging), 80% of the battery can be recharged in just 40 minutes.

The interior of the Nissan Leaf is very well equipped and has excellent finishes and materials.

The company Axion already offers this service in Buenos Aires, in its branch of Av. Libertador, in the corner Salguero and, for now, it is free. YPF has already put the bombs in some branches, but they still do not work.

And how much does it cost to recharge the batteries at home? Not much. Folha's battery has a capacity of 40 kwh kilowatt-hour) and taking into account that, for example in Buenos Aires, the kwh price is on average 2.5 pesos, it carries the Folha battery from scratch (being completely empty) to 100 of its capacity, would cost about 100 pesos.

In the city, the battery life is about 200 kilometers. This is what he gave us in the test, using the car in a rather "conservative" way. So if we go back to the comparison with Sentra naftero, the cost of those 200 kilometers with a battery is something like 15 of what we would spend on gasoline. With an urban consumption of 8.5 liters per 100 kilometers, a Sentra would spend 17 liters of naphtha in 200 kilometers. And if we round to 40 pesos per liter, would be 680 pesos. Against the 100 pesos of the leaf …

But Folha also offers different ways to increase its autonomy. In Eco driving mode, the car has a little less acceleration, it is less agile, but of course it also consumes less battery and increases the autonomy by about 10%.

The Nissan Leaf's nose is in the trunk and has two entrances; one for the conventional load or the box Wall, and another for the fast load).

On the other hand, of the selector that works as a shifter (although it has no changes, only D to advance and R to return, something that reverses the polarity of the electric motor) can connect to mode B. This is a brake type (regenerative braking , therefore B) that recharges the battery by converting kinetic energy into electrical energy. It is noticed when we stop accelerating, as if the wheels are a little slower. When we return to D mode, the wheels are released (the car keeps speed up longer when it stops accelerating), but the battery is no longer recharged. And finally, the e-pedal can also be used. In this driving mode, the car can be operated virtually without using the brake pedal, with the accelerator pedal, as in the "shock cars" of the amusement parks. Because when you release the accelerator, the car slows down and even continues to slow down in a decline. In any case, the brake pedal is always available, because if we reach a high speed, it will be necessary to use the conventional brake.

The e-pedal is for use in the city and, when we get used to it, is extremely comfortable. One detail: in the e-pedal mode, when the throttle is released, the stop light comes on to indicate that we are braking, even if we are not pressing the brake pedal. Very good!

Selector for Direct (D) and Reverse (R). The Nissan Leaf has no changes.

With all these power saving modes, you can get up to 30% more autonomy. That is why we say that "our 200 kilometers" can be greatly improved.

And if we talk about costs, an electric car has another fundamental advantage: a maintenance cost almost zero. The engine does not wear as many moving parts as a combustion engine, it has no oil or grease of any kind and even the brakes wear less with those systems we describe. It will all depend, then, on Argentina improving its energy infrastructure so that electric cars are definitely the cars of the future.

The Nissan Leaf has an 8-inch screen with a 360 ° reversing camera.

Nissan leaf Half analog plate and digital half.

Start button. In Nissan Leaf, as in electric cars, it is necessary to look at the frame because it is not perceived whether the car is on or off.