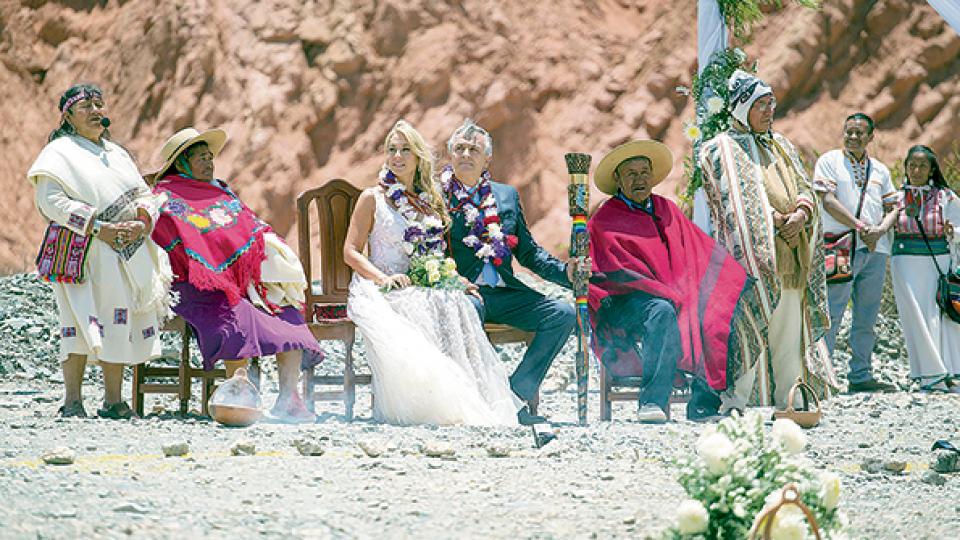 The governor of Jujuy, Gerardo Morales, fulfilled his desire to marry Tulia Snopek, sister of the Justicialista senator Guillermo Snopek, his girlfriend for a year. As they have not been able to do so in a civil registry since the bride has not yet obtained the divorce from her ex-husband, they did so with an Andean ritual in the locality of Purmamarca which they broadcast live on Facebook. "May your love and energy be with us forever, I love you," said the governor. The bride did not stay behind: "I give you this chuspa as a symbol of respect and authority. I hope that we spend our whole life together loving and respecting each other." The chuspa, not to generate suspicion, is a small traditional woven bag of Andean peoples.

The accountant Gerardo Morales, 59, is divorced and has three children. Tulia Snopek, 45, also has three children and fought a tough legal battle with her second ex-husband, Tucuman lawyer Carlos Marti Coll, with whom he has three divorce cases, two in Tucumán and one in Tucumán. Jujuy. . Marti Coll and Snopek were married in November 2015, but each continued to live in their province and traveled to meet each other. The particular relationship ended earlier this year when the photo of the scribe appeared alongside Governor Morales at a warehouse in Mendoza. There, the husband began a divorce and a judicial war.

Snopek comes from a Peronist family, Morales' adversary in the province. His father was former governor Guillermo Snopek, who died in 1996 in a car accident. His estate opened a dispute with his brother, now Senator Guillermo, for possession of an automotive registry and since then they have distanced themselves. So much so that Senator Snopek took the defense of Marti Coll in the divorce process.

One of the more bizarre touches of the lawsuit came in connection with the litigation over an Audi Q3 truck, which Snopek claimed, but her ex-husband denied it. Judge Isidro Cruz – next to Morales and one of the magistrates who persecute Milagro Sala and Tupac Amaru – ordered his arrest. Marti Coll was forced to surrender to Tucumán. Senator Snopek denounced the situation in the previous Senate session in which abortion was debated. "Pathetic of him, the Senate is not a Family Court," Morales replied on Twitter.

A Jujeño court issued its decree of divorce but the House of Family and Succession of Tucumán blocked the annotation of the sentence. At this point, Morales said that if the divorce did not come out until December 15 – it was the scheduled date for the civilian – they would also be married through an indigenous ritual. Shortly afterwards, the opposition denounced as an early honeymoon the trip that the governor and Snopek made to France last September, with official funds and an agenda with many whites.

Save the date, says the head of the card that the couple distributed among the guests for the party they plan. From the English they went to the Andean ceremony yesterday, broadcast live, at the foot of Cerro Los Colorados in Purmamarca. The ritual began at noon. Against the backdrop of a bunch of sikuris, the bride and groom, wrapped in a blanket, asked for the blessing of nature. His costume was not telluric. The bride wore a white dress designed by Javier Saiach, while Morales wore a classic blue suit. Always accompanied by spiritual guides called Kusi Killa and Wanka Willka, they agreed to an energy cleansing, where they exchanged chuspa, seeds, flowers and other elements, where they swore love. "I hope that the pacha gives us strength to defend our love," Morales said. "Ger," Snopek replied, "since I met you, you changed my life." After the ceremony, they spoke to the press. They predicted that they will look for a child and that for the party of 15 they expect to have the presence of Mauricio Macri and Juliana Awada.