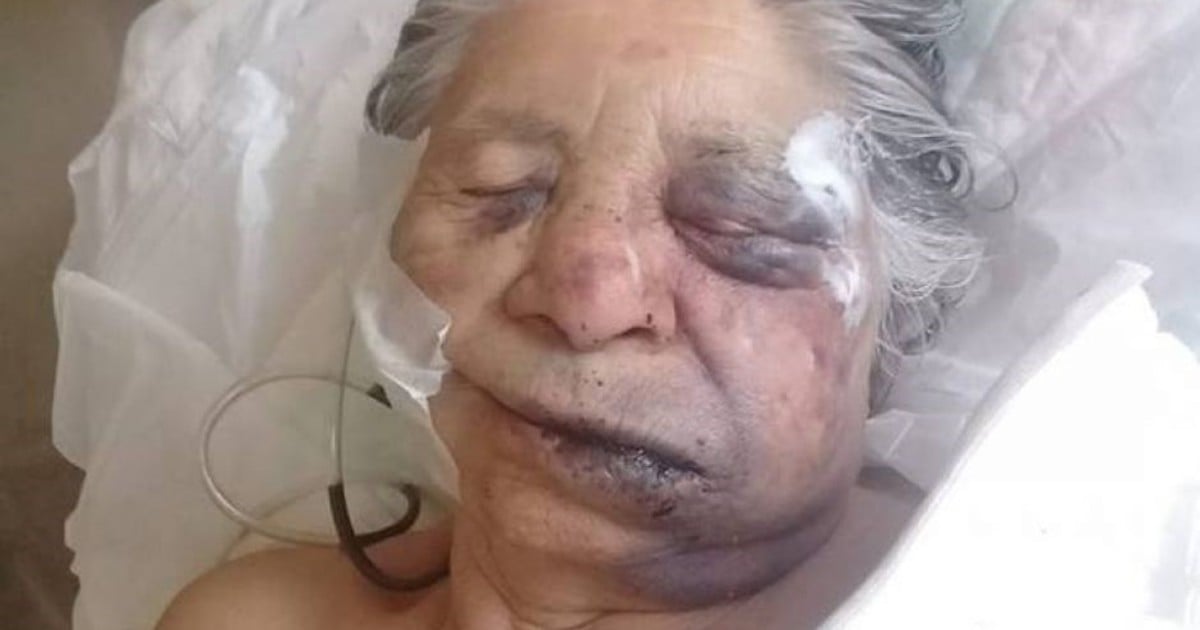 "Justice for my grandmother, she's not coming back …"The sentence, full of pain, corresponds to Rocío Peralta (28), one of the granddaughters of Dolores Encina, the 83-year-old retired who was brutally beaten in an assault and died after five days of agony in Reconquista, a Santa Fe city of more than 70 thousand inhabitants who are shocked.

The photo of the victim, after the beating, transcended on social networks and was replicated by different journalistic media of the country. It was disseminated by his relatives so that they will take note of the savagery with which the criminals acted, who subjected her to fierce punishment while sleeping in her room.

Dolores Encina (83), on the beach, next to Rocío, one of his granddaughters. Thieves killed her with blows in Reconquista, Santa Fe.

What happened to Dolores is something that scares those who have elderly relatives who live alone and are vulnerable, an easy prey for thieves.

At the age of 83, this grandmother continued to frequent her kiosk at her home, on Columbus Street, to 400, in the Noroeste neighborhood. "For 30 years she was the caretaker of ENET No. 2, she was always self-sufficient," said her only daughter, Teresa Spontón (46), a nurse based in Rafaela who had been visited by her mother two months earlier.

Dolores Encina (83), along with his only daughter, Teresa Spontón. Thieves killed her with blows in Reconquista, Santa Fe.

It all happened in the early hours of Sunday, November 9. The dramatic scene in which they found Dolores surprised the local police. In the room, in bed, the researchers found blood, scalp and disorder.

On the floors of the whole house there were signs that the retiree had been dragged by the criminals into the bathroom, where they lay her down.

The robbers took money, a 32-inch TV, the gold wedding ring that belonged to her husband and a cell phone.

After the fierce attack, the woman was transferred to the Central Hospital of the Reconquista, cranial fracture and bruising in different parts of the body. He resisted until Friday at dawn.

Dolores's ex-son-in-law, realizing that he did not respond to phone calls, approached the house around 1:00 pm on Sunday 9th. It was then that he encountered the horror: the woman did not answer, she was bleeding and her body was very beaten up. .

Teresa Spontón, the only daughter of Dolores Encina (83), the retired woman beaten to death in Reconquista, Santa Fe.

Police acted after the incident and arrested two young men. The main suspect is Isaías Natanael Gómez (22), who said he was a changarin before promoter Aldo Gerosa and is believed to have been the material author. They accuse him of "homicide aggravated with treason"which provides for a term of life imprisonment.

The other detainee is Héctor Ramón Ríos (27), the young man who would have bought the TV stolen from Gómez, accused of "cover-up", in the case in which Judge Gonzalo Basualdo intervenes.

The magistrate assured that "it is sufficiently proven with the evidence that was collected that Gómez is the author of the act". In addition, he said that the suspect "presents wrist injuries, compatible with the blows, and presents neck injuries, compatible with the defense of the victim"And it was discovered that he was" the one who stole and gave to third parties elements that were of the victim. "

"Once he committed the crime, he took things off and tried to hide them, he knew very well what happened, there were people who believed that he (a delinquent) has smaller children or because he is addicted to alcohol. it's like a free hand to do any damage, and it's not like that"Basualdo told local media.

In addition, he admitted that the victim is "vulnerable people, prone to fall into these deceptions, which is very difficult to avoid." And he pointed out that Gómez, "with the attack, beating and abandonment of the victim under the conditions in which he left her, showed great disrespect for human life"

"I do not want anyone to go through what we are going through, I never thought we would be in this place, Isaías Gómez, you ruined my life, the possibility of passing the party with my old lady, I am the only daughter. maximum, "said Dolores's daughter.

In declarations for the portal Reconquest today, the woman questioned that the suspect had expressed, through his official defender, his fear of being transferred to a penitentiary institute of the province.

"He is a coward, I can not find the word, he is afraid for his safety and his life, And my mother, who did not give her any chance?", I wonder.

Edgardo Peralta, 49, a former son-in-law of the victim, claimed justice and warned: "There should be no more Dolores Encina in the Reconquista, because it was an aberrant crime."

Gomez was in front of the prosecutor on Friday and on Monday, it will be Rivers's turn. The first is placed at the crime scene and the second, at least as an accessory. Rios' 33-year-old girlfriend was also arrested in the last hours.