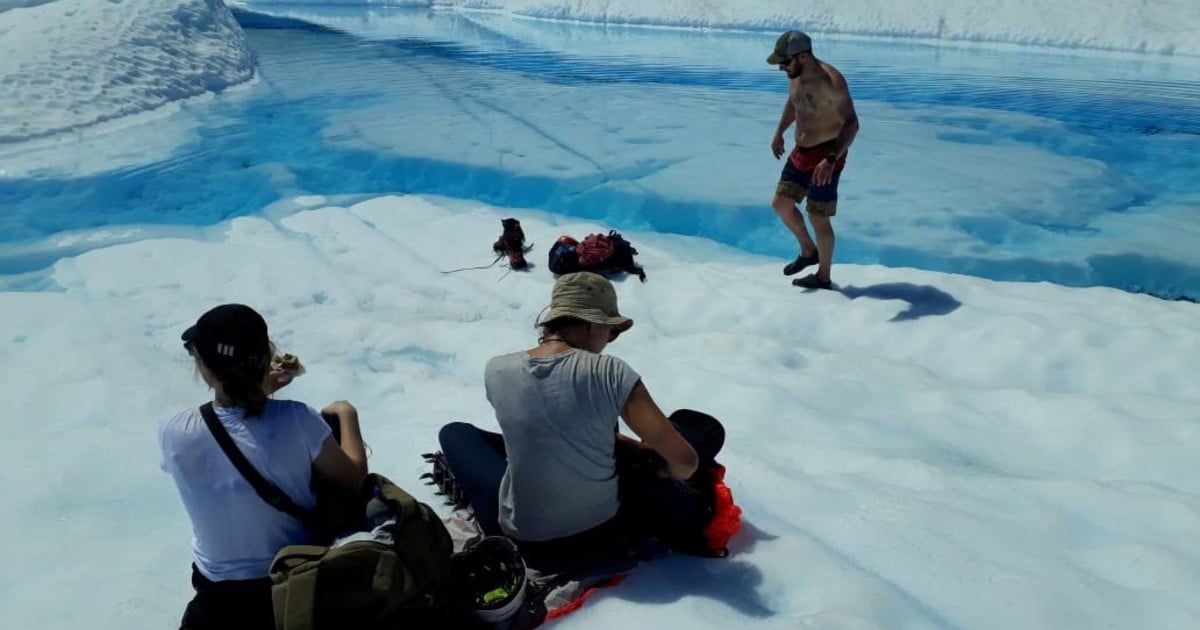 Mesh in Tierra del Fuego and Santa Cruz and with a snow coat in Jujuy in the middle of summer. If we talk about temperatures, the "El Reino del Revés" is based in northern and southern Argentina. In Patagonia there is a record of high temperatures, which in many cases surpass the center of the country. In addition, on Tuesday it snowed in the cities of Jujuy of Catua and Mina Pirquitas.

Meteorologists give numbers while at one point and another in the country do not know what to wear to get out.

On Monday, the city of Perito Moreno, northwest of Santa Cruz (not to be confused with the glacier, which is 500 km away), reached a record of 38.2 ° C. "Widely exceeded its previous mark of 35 ° C, from 1961 until today, "he explains. Clarin the meteorologist Christian Garavaglia.

Two other Argentine cities with an official measuring point by the National Meteorological Service (SMN) also made history: at the Santa Cruz airport in Puerto Santa Cruz, a 37 ° mark was reached, which surpassed in half the previous record. "While in Rio Grande, Tierra Del Fuego, the temperature rose for the first time above 30 ° C. At least since 1961, when it began to be measured systematically, reached 30.8 ° C. The mark broke by more than 2 ° "continues the specialist.

But, attentive, despite what felt the locals and tourists perplexed by the heat, in Ushuaia the temperature was not record. The maximum on Monday was 26.5 °, when the record is 28.5 °.

In Comodoro Rivadavia, Chubut, the temperature rose from 20 ° to 30 ° during the first hours of Tuesday in the period of one hour and remained in the morning as the hottest place in the country. The National Weather Service maintained a special report in force for most of the Patagonia region during the day, where they estimated maximum temperatures of 27 ° to 32 ° in the southern region, while in the rest of the area they would be between 32 ° and 38 °, "can be overcome locally".

The World Meteorological Association also echoed our "southern heat." In South America, we stand out together with Chile for the "heatwave that broke records on Monday due to an intense anticyclone in the east of the country that transports hot air to all of Patagonia."

Also in spite of the strange sensation of warmth instead of cold, Garavaglia clarifies that "it is a meteorological situation that occasionally occurs at this time of year and allows Patagonia to have the highest temperatures of the year."

At the Perito Moreno glacier, the guides decided to refresh themselves.

Climate change has to do with this "temperature rock"? "These specific phenomena are not directly related to climate change, in which case we will have to continue to investigate whether long-term climate change changes the region's overall circulation, making these events more and more frequent," he says.

Meteorology translates these heaters as what happens after the passage of a cold frontal system across the country, followed by an important system of high pressures associated with good weather. This high pressure system, due to its location, promotes the north wind for several days over Cuyo and Patagonia, which rapidly increases temperatures in the country sector, and then do so in the central region as expected these days.

And the snow in Jujuy in the middle of summer? The cities of Jujuy in Catua, on the border with Salta, south of Jujuy, and Mina Pirquitas, located in the northwest of the province, were covered with snow after a heavy storm. The phenomenon occurred as part of a storm that affected much of the Andean region.

"The average temperatures in January, the hottest month, are 10 ° C. If low temperatures are added to the possibility of rain and other weather factors, snow can happen, the subject is that it rains very little, almost 100 mm the rainy season in part of the Cordillera and in the foothills, added to the cold air intake and the decrease of temperatures at night, made snow-covered dawn, sum of factors or causalities, "explains meteorologist Mauricio Saldivar.

The Argentine northwest is one of the driest areas in the country, but in the summer the storms are frequent, sometimes they extend to the highlands, where they can leave hail or in events like this with another type of snow cloud, we must not forget that we are talking about places located at 4,000 meters high, which also favors the occurrence of rainfall in the desert to the north of Chile. time of the year, "says Garavaglia.

A total of 12 teachers who teach in summer schools in the department of Susques did not make it to the workplace due to bad weather. Summer school classes run from September through June.