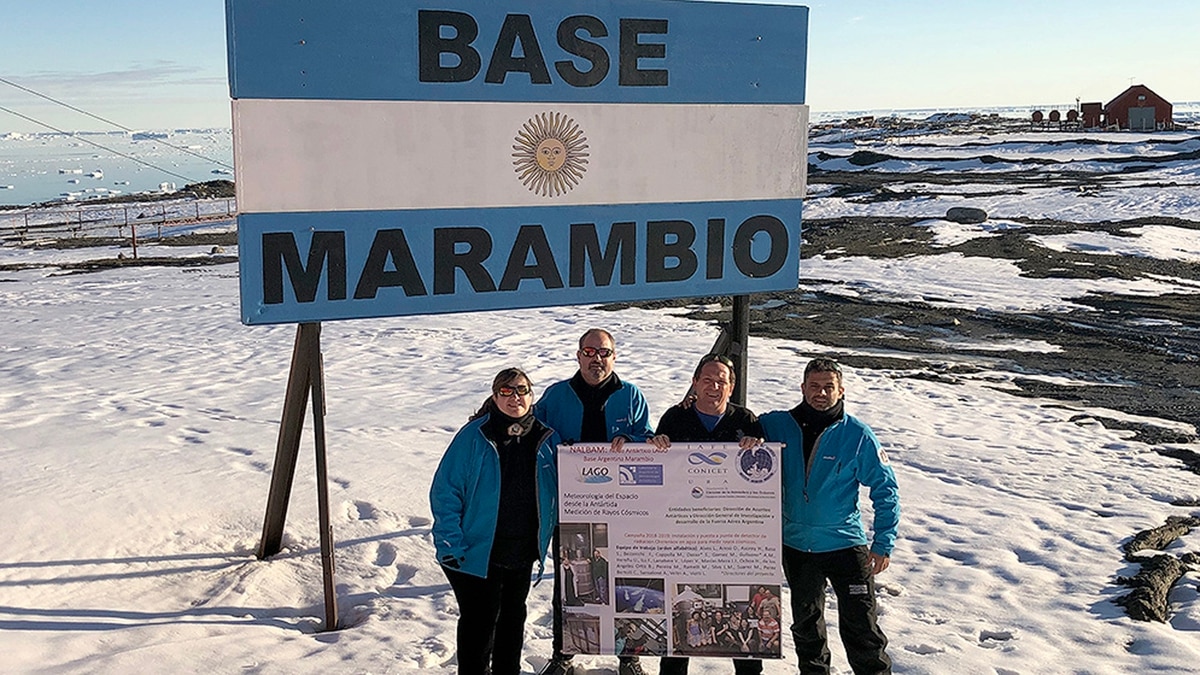 O cosmic rays They are particles that come from space and constantly bombard the Earth from all directions. Most of these particles are nuclei of atoms or electrons. Some of them are more energetic than any other particle observed in nature.

Since its birth, more than 4,600 million years ago, the Earth is permanently bombarded by them. The ultra-energetic cosmic rays travel at a speed close to that of light and are hundreds of millions of times more energy than the particles produced by any accelerator in the world.

Argentina is a leader in this type of studies thanks to the operation of the Pierre Auger Observatory in Mendoza for several years. But now, the challenge is to measure them from one of the most hostile places on the planet: The Antarctic.

Thus, a group of Argentine scientists developed the first national Antarctic detector of these cosmic rays, which will seek to understand the origin of these energy emissions and know a little more to avoid failures in geo-positioning systems and satellites.

During January and February, it will be installed at Marambio Base "Neurus", the new cosmic ray detector developed by CONICET researchers at the Institute of Astronomy and Space Physics with colleagues from the Argentinean Antarctic Institute and the departments of Atmospheric and Oceanographic Sciences and Physics at UBA.

"We are interested in understanding the flow of cosmic rays, their variability and their connection with solar wind conditions and solar activity," explains Dr. Sergio Dasso, principal investigator of the National Council for Scientific and Technical Research (CONICET) in the Institute of Astronomy and Space Physics (IAFE, CONICET-UBA) and regular professor of the University of Buenos Aires (UBA) in the departments of Atmospheric and Oceanographic Sciences and Physics, which leads the project of particle detector, developed in its entirety. in the IAFE.

The team is composed of Adriana Gulisano, from the Argentinean Antarctic Institute, and Sérgio Dasso, both physicists, along with Omar Areso, a specialist in electronics and mechanics and support staff at IAFE, and Matías Pereira, a computer expert and IAFE support team . In the first stage they had the collaboration of researchers from the Bariloche Atomic Center who participated in the Pierre Auger Observatory.

How the detector will work

This project is framed in a Latin American collaboration called LAGO, by its acronym in Latin American Giant Observatory, that is a spin-off of the Observatory Pierre Auger. It has the same technology as surface detectors: a water vessel is filled and when a relativistic particle with electric charge passes, the vessel is flooded with light due to an effect called Cherenkov radiation in the water. This light is detected with a signal amplifier, a photomultiplier that manages to increase that amount of photons and turns it into an electronic signal that we can acquire and store in a computer.

It should be noted that the installation of the cosmic ray detector is framed in a joint project with the Argentine Antarctic Institute, which made an essential contribution to the infrastructure and transportation of researchers.

The installation of this equipment weighing more than one tonne and occupying 2 m² in Antarctica has the advantage that, because of the geomagnetic field, the charged cosmic particles are easier to enter the Earth's space environment, so higher fluxes are observed and can more information in high latitudes than in equatorial regions.

One of the main advantages that the team has over others is that it can discriminate energy, not only count and characterize how many particles per unit area per unit of time are reaching the surface of the Earth, but also, they can classify energy bands. "This will allow us to advance significantly in the knowledge of what is known today," says Dasso.

The information measured by the detector is stored locally on several high capacity hard drives, but at the same time a synthesis of the data that a computer program performs will be transmitted in real time on the IAFE servers and made available to the community in real time.

"The applications of this detector are multiple, in particular we do research in basic science together with the Department of Atmospheric and Oceanographic Sciences of the Faculty of Exact and Natural Sciences of UBA." We made a characterization of the effect that the This is a cascade of particles that develops from the primary cosmic rays that come from outer space. Finally, we observe the secondary particle flows. On the other hand, the data to be operated in real time are very important to monitor the conditions of space weather, "said the expert.

"This has to do with the space weather and this monitoring that we are going to report from Argentina will be relevant to determine if the radiation levels are reasonable or very high and if it is necessary to make decisions on the redirection of flights or the cancellation of flights. for example, "says the Argentine physicist, postdoctoral fellow in the National Aeronautics and Space Administration (Nasa) and member of the World Meteorological Organization (WMO) panel of" Space Weather "experts.

In Argentina there are several satellites and the conditions of the space climate can also influence the damages that suffer with the increase of the levels of radiation.

"So the monitoring we are going to get real-time in Antarctica will help characterize these conditions," says Dasso, adding: "We are very excited because we are going to install and execute the first measurements of a device that was completely developed in Argentina in a Latin- American ".