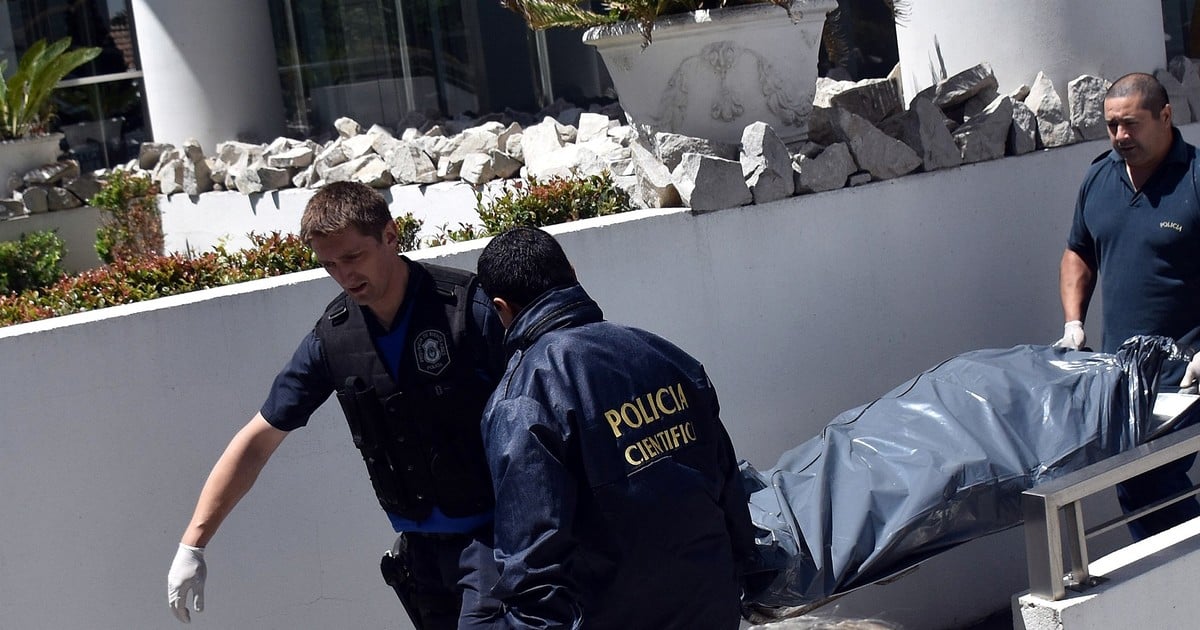 The crime of the owner of the chain of churrerías and restaurants "Manolo", Juan Manuel Santurian (60), caused an impact in Mar del Plata. More because the murderer was his former father-in-law Miguel Angel Garcia (70), who committed suicide. Although for investigators it is practically a closed case, with victim and victimizer in the same scene, it is still necessary to reconstruct the story that led to this brutal outcome.

On Wednesday, the autopsy report was revealed, revealing that Garcia first beat Santurian twice and when his ex-son-in-law was already on the ground He finished with two more bullets.

Everything points to what happened on Tuesday at 8:30 in the parking lot of the luxurious Boghoss II building, located in Libertad at 3300, was a premeditated crime.

Santurian received four shots, and a fifth failed to impact his body. All with a .40 caliber special pistol. The same as the murderer used to commit suicide, beating his chest in white.

According to the newspaper published this afternoon in La Capital, the forensic medical staff of the Scientific Police prepared the report that later reached the Public Prosecutor's Office No. 5 of Alejandro Pellegrinelli. The detail indicates how the sequence was.

Garcia faced Santurian and made a first shot that would not have hit the target. That projectile struck a wall. Then Garcia shot again and is believed to have injured Santurian in the left arm. This bullet was lodged in the left clavicle.

The repetition of the weapon caused a new shot to come out almost immediately and even hurt Garcia, the attacker, in the chest. Santurian collapsed behind a Volkswagen Amarok pickup, face down.

For the prosecutor Pellegrinelli, Garcia insisted. He fired two more shots. The one who entered the dorsal left and left the right armpit, to re-enter the right elbow. The one that came through the neck. Santurian died on the spot.

The building where the crime was committed, located in Libertad and Salta. (Fabian Gastiarena)

For its part, the autopsy on Garcia's body determined that He put the gun to his chest and killed himself. The injury to the heart muscle was so severe that it killed him instantly.

Finally, discarded the presence of third parties at the scene of the crime and subsequent suicide.

"It is clear that there is a very strong story, with a lot of drag, so that a person makes the decision to kill and then take his own life," he said. Clarin a case investigator. The range of hypotheses ranges from economic to family differences. It's just that Santurian was in the midst of divorce proceedings with Romina Garcia, Michelangelo's daughter.

The life of Juan Manuel passed between Miami, where "Manolo" has a branch and Argentina. In Mar del Plata, the man lived on the first floor of the tower located in Libertad and Salta, a luxurious building where a two-bedroom apartment is worth 200 thousand dollars.

Michelangelo lived a few floors up. It is not excluded that, as part of the break with Romina, Santurian asked Garcia to leave your apartment free and this has been one of the ingredients of the conflict.

Juan Manuel Santurian, one of the owners of the gastronomic chain of Mar del Plata "Manolo". (Photo adventureamericana.com)

According to what was recorded by the building's security cameras, the former father-in-law waited several minutes for the victim inside his gray Peugeot Partner, which was parked in the garages. One of the films caught the moment when everything was unleashed. Juan Manuel He left the lift for his white Mercedes Benz and along the way he passed close to his partner. At that moment Garcia appeared. They think he came to shout something at the victim.

Garcia I was waiting in the garage. one that Santurian will arrive, "he said Clarin the Pellegrinelli promoter.

It was the private guards of the building who heard the detonations, ran to see what happened and called 911.

The Scientific Police conducted the tests in the garage and caliber .40 pistol Mark Tanfoglio. "It's a weapon of great shock power," said Pelegrinelli.

Juan Manuel was the father of three daughters. Two of them are the product of their first marriage and the third of their relationship with Romina. He met the last one in one of his restaurants, where the woman was employed.

The two oldest children of Santurian live in the United States and, as a result of their father's crime, plan to arrive in the next few hours. The prosecutor is expected to invite them to testify as witnesses to ask if they knew of any prior conflict with Garcia.

The researchers will also analyze the two men's cell phones, looking messages or calls that allow us to understand something more than what happened.