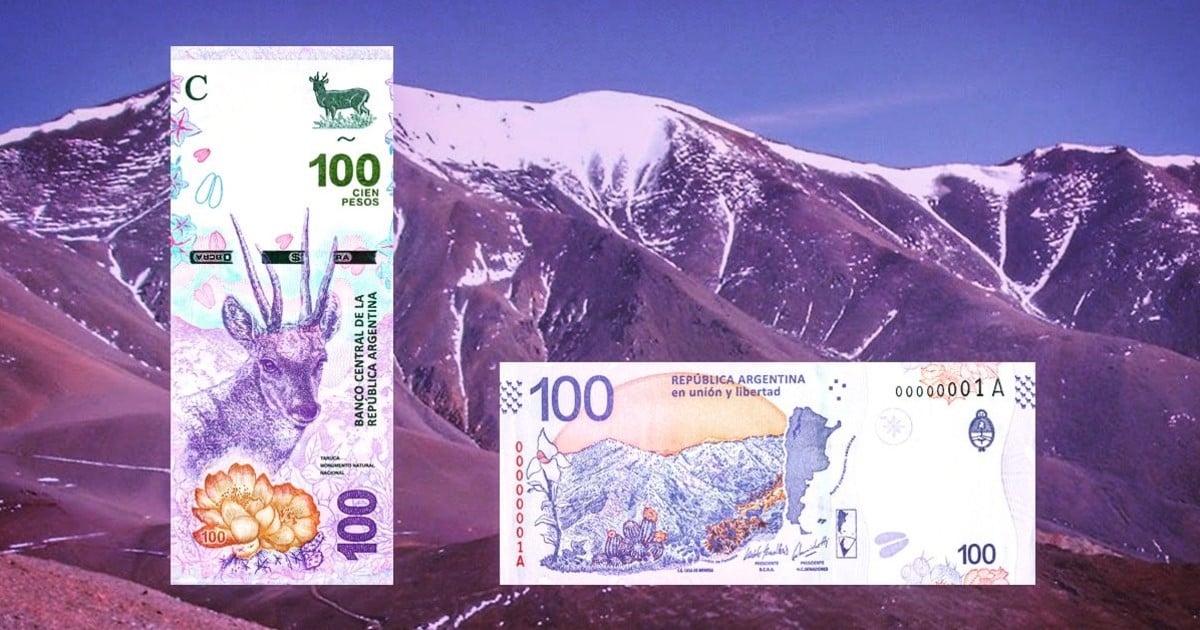 A new member arrives in the family of tickets "Native Animals of Argentina". From this Wednesday a new 100-peso coin will go into circulation, the central bank announced on Tuesday. In this case, it will take the image of the taruca, a deer that lives in the northwest of the country.

The new ticket will coexist with the other two models with the same name: Eva Perón and Julio Argentino Roca.

At the adverse The portrait of the animal with ornamental flowers, accompanied by the text "Taruca national natural monumental" is reproduced from the new paper money. And to the right of reading "Central Bank of the Argentine Republic.

The security fund represents a natural mountainous environment in the lower sector of the obverse. In the upper sector, the sky and the representations of taruca footprints are observed in multiple directions, as a symbol of plurality and ornamental flowers on both edges.

In the upper left corner, the letter "C" expresses the value of the entry in Roman numerals and, on the right, the silhouette of the animal.

For its part, the to reverse shows as an important reason an artistic recreation of the Cord of Famatina, where this mammal lives. Between the landscape and the bicontinental map of the Argentine Republic, another map is located, with its distribution.

The security measures of the new ticket.

At the upper side edges, a set of tarucas It is completed by joining the ends of the account. The silhouettes of footprints distributed in the background in different directions continue the concept of plurality of the obverse.

In the lower left corner, we see a representation of the taruca as an element dedicated to the children's audience.

The fliza Currency of $ 10 integrates the family of coins of the series "Trees of the Argentine Republic". Effect on Homogeneous Alpaca, has a golden hue, measures 24.5 millimeters in diameter and weighs 9 grams.

The two and ten-pound coins will have the images of the drunkard and the calden, respectively.

At the front, you can see the stylized representation of caldén, exclusive species of our country and owner of a wide and rounded glass characteristic; in the upper arch, the text "República Argentina" and in the lower one, "Caldén", common name of the tree.

The reverse looks like a flower synthesis and in it, in small characters, the denomination in numbers of continuous form, and leaves of the caldén. In the upper arch, the motto "In union and freedom", and in the inferior, the year of the mint. The location of the denomination "10 pesos" symbolizes the section where the tree is original within our country, in this case, the center.

The series, moreover, incorporates a new $ 2 coin made of electrodeposited steel with brass having a golden hueWith the representation of a club drunk.

The arrival of the $ 100 bill complete the "Native Animals of Argentina" family, which seeks to highlight the enormous wealth and diversity of our country.

The obverse of each paper currency refers to the figure of an animal typical of each region, while the reverse emphasizes the habitat characteristic of this species.

According to the Central Bank, this series of tickets "seeks to be a meeting point among Argentines that contributes to the union of citizens in the task of honoring the country, its fauna and strengthen the commitment of everyone with the environment, with joy and life ".