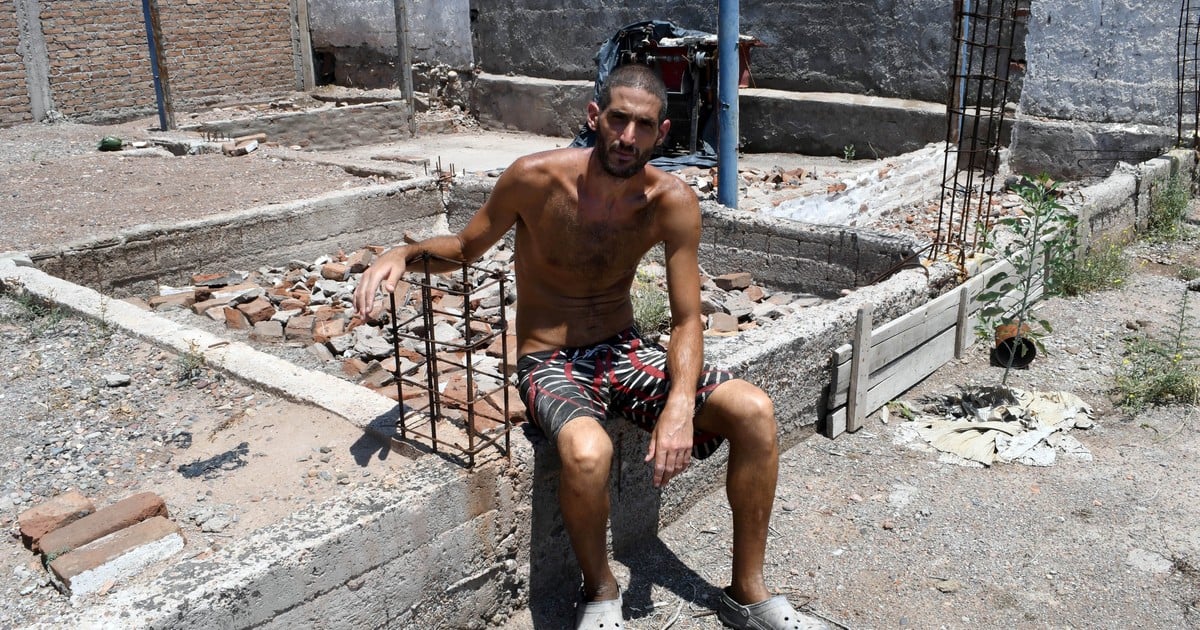 Sitting, his right arm resting on a building beam and the other on his left leg, looking at the camera. No shirt, with a pair of jeans he always wore and dirty summer shoes. When he swore he had not murdered his mother and aunt and the investigators still could not get proof to send him to jail, Nicolas Gil Pereg posed for a photographer a few yards from where he had already buried the two women.

The image is a proof of perversity of the man who was born in Israel 37 years ago. Behind him, under stones, rubble and dirt, were the bodies of Pyrhia Sarussi (63) and Lily Pereg (54), the sisters who traveled to Mendoza to visit him and were brutally murdered.

The women arrived in the province on Friday, January 11. The next day they went to the property where Gil Pereg lived in poverty in Guaymallén and where, according to the evidence, he killed them with bullets and beatings. Already dead, he went through irons in different parts of their bodies and buried where I was beginning to build a house with four rooms.

Investigators suspect it was a premeditated double crime. They argue that just this way Gil Pereg, whom they define as "An intelligent person with a very high IQ", he could dig a well of nearly two meters to hide the bodies, cover them with earth and stones and leave the place without signs of ground movement. All in a very short time.

The suspect covered the corpses with a layer of earth, another of stones and another earth. According to judicial sources, he imagined that they would never be found, because the men and machines who sought the Israeli sisters on their property, having contact with the stones, would think that they could not continue looking there and pointed to another area of ​​the extensive. property.

The dogs that discovered the bodies of the murdered Israeli sisters. (Gustavo Rogé / Andes)

In the place also they found several animals dead and dissected in a grid. When asked about this situation, Gil Pereg stated that he did not bury them for religious reasons, although the explanation was very different: the nauseating odor would serve to confuse the dogs trained in the search for corpses.

But on Friday 18 began the plan of Gil Pereg, who until then was the main witness of the cause that investigated the disappearance of the Israeli sisters. In an attack, the researchers found clothes and bags of cement with blood stains. The DNA match confirmed that they corresponded to one of the women.

That's why a week later he was arrested, when he had already begun to discover in travel agencies in time to flee to Buenos Aires. Last Saturday, the dogs marked a specific area on Gil Pereg's estate. There were the bodies of his mother and his aunt.

The Scientific Police at the Pereg site where they found the bodies of the murdered Israeli sisters. (Gustavo Rogé / Andes)

The motive for the killings is not confirmed and the hypothesis multiplies. "We suspect it is economical because this woman (Sarussi, Gil Pereg's mother) was sending money to her permanently.He had set up companies, he had written bad checks for more than 9 million pesos.In the field of hypotheses I want to imagine that the mother and the aunt who formed some of the they must have asked for some explanation"The court's lawyer, Alejandro Gullé, told local media.

On the other hand, the main prosecutor of homicides, Fernando Guzzo, said that "the cell generates interest in society and the press, but legally we can not always find it."

In addition, possible money laundering maneuvers are analyzed, since Sarussi, who held a significant position in a collection agency in Israel, established five companies in Mendoza, whose director was Gil Pereg. But none of these companies had a real address.

The moment when Nicolas Pereg was arrested for the double crime of his mother and aunt.

It is also not known with certainty how the defendant was kept, an engineer with experience in the Israeli army and knowledge of weapons. So much that he had more than 40 registered in his name, although in the attacks on his home, only four were found. One of the suspicions is that he sold them or rented them on the black market.

The man was charged with manslaughter aggravated by bond in royal contest (in the case of his mother) and simple homicide (in reference to his aunt). After hearing this accusation, threatened to commit suicide"If you do not let me go to my house to take care of my cats, you'll find a body," he told prosecutor Claudia Rios.

He remained in the "Admission Sector" of the Penitentiary Complex of San Felipe II, in the provincial capital. Officials have pointed out that this tall, clumsy man He has not eaten since Saturday.. "It will be under the supervision of the Interdisciplinary Council, made up of doctors, psychologists and psychiatrists, among others and so far has stated that it does not want to eat," they said.