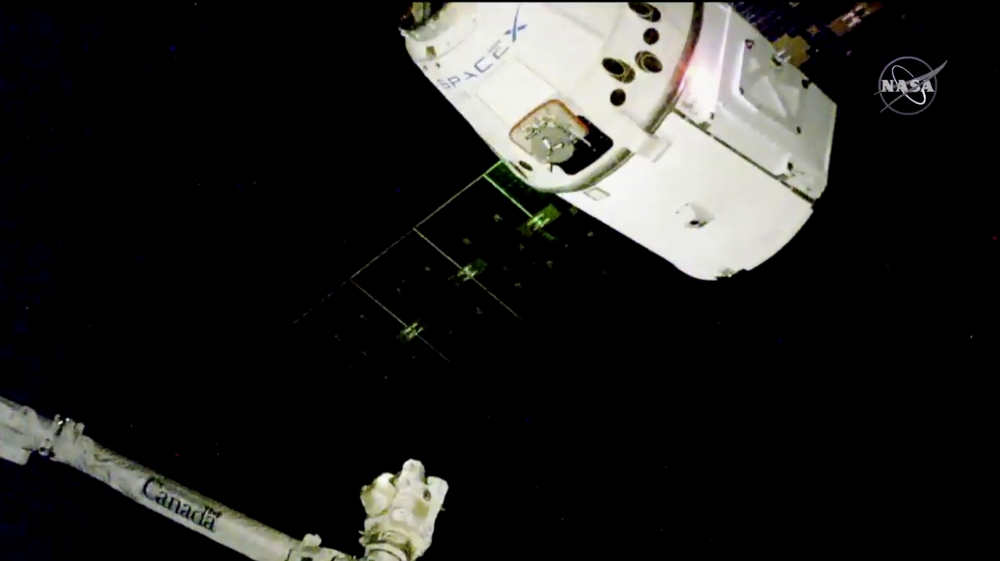 A SpaceX delivery packed with Christmas gifts arrived at the International Space Station on Saturday, after a brief delay caused by a drop in communication.

The American company's Dragon capsule arrived in the orbital lab three days after the launch of Cape Canaveral, Florida.

Commander Alexander Gerst used the spacecraft's large robotic arm to grab the cargo carrier while the two vessels climbed 250 miles above the Pacific.

It took two attempts to get the Dragon close enough to be captured.

NASA canceled the Dragon's first approach because of problems with the communications network that serves the space station.

Failure of equipment in New Mexico to NASA's Satellite Data Retransmission and System resulted in a temporary loss of communication with the station.

For security, Mission Control ordered the Dragon to back it up.

It was a hit two, just an hour and a half late, after NASA switched to another TDRS satellite.

The Dragon contains everything the station's astronauts need for Christmas dinner, as well as mice and earthworms for scientific experiments, and over 2,270 kg of station equipment.

Three of the space station residents will be on board for Christmas; the other three will return to Earth on December 20. Until then, the station houses two Americans, two Russians, one Canadian and Gerst, who is German.

It's the second visit from the space station to the recycled dragon – it was there last year as well.

SpaceX has been doing station loading for NASA since 2012. This is its 16th installment under contract.

Two other supply ships are connected to the space station: one Russian and one shipped by NASA's other commercial shipper, Northrop Grumman.