A group of researchers from the University of Duisburg-Essen (Germany) discovered a network of hitherto unknown blood vessels that is found inside the bones of animals and humans and which causes the blood and cells of the immune system to spread from efficient and fast way throughout the body, according to an article published Monday in the journal Nature Metabolism.

"It's really unexpected to be able to find a new anatomical structure and central, which was not described in any manual in the 21st century, "explains Matthias Gunzer, molecular immunologist at the educational institution, quoted ScienceAlert.

These small channels, called transcortical vessels (TCV), help to explainlike drugs injected into the bone marrow – rather than intravenously – for soldiers wounded on the battlefield come into force so quickly.

The origin of the object of study dates back to years ago, when Gunzer was conducting research on blood cells stained with fluorescence in mice. It was then, with the help of the microscope, that he first detected this network of blood vessels, which seemed to pass through what should be a solid bone. 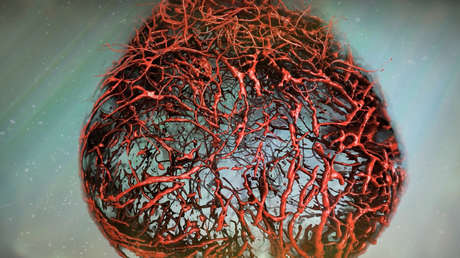 Realizing that the medical literature did not explain anything about it, he decided to start a research project to explore this issue. For this, Gunzer used a substance called ethyl cinnamate, which he applied to the rats' tibia to make it transparent. They then used a combination of light microscopy (LSFM) and X-ray fluorescence micro- microscopes, for which they first detected hundreds of TCVs passing through the cortical layer of the cells' bones. legs

According to the new study, a rat tibia may contain more than a thousand transcortical vessels. In addition, researchers more than 80% of arterial blood, as well as 59% of venous blood go through these channels.

Later, the team of scientists wanted to know if the same thing existed in the human body, so he examined the Gunzer's own tibia, finding the same type of TCV structures, though thicker. However, experts argue that it is necessary to investigate more about this network of blood vessels to know its exact function.

This new finding may contribute greatly to the understanding of how blood flows in general as well as in the investigation of inflammatory diseases, tissue damage, or cell migration in particular. "It's utter madness that there are still things to discover about human anatomy today," Gunz told NewScientist.