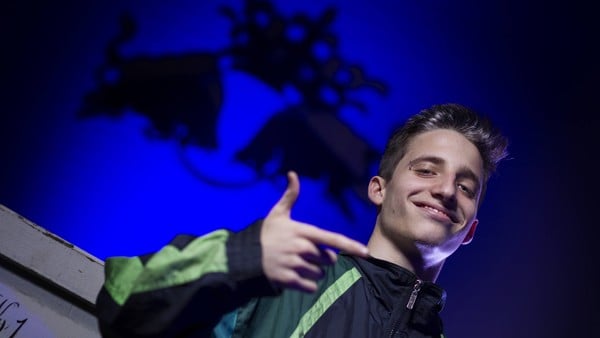 After nearly three hours of show, this Sunday the 2018 Red Bull champion was set Battle of the Rooster. The winner was the Argentine Wos, who celebrated the victory in front about ten thousand spectators who packed the Argentine Horse Riding Club.

This year revived the international final of last year, only this time Wos did not go empty-handed and won an electrifying hand in hand with the Mexican "Aczino", a favorite.

Argentine Woz is the new champion of the Battle of the Gauls 2018 (Instagram).

Wos is the artistic name of the porteño Valentín Oliva, freestyle rap figure. He is 20 years old, studying theater in Buenos Aires and his way to the final of 2018 was not easy.

Wos with his national title, something that allowed him to fight for the world title. Photo / Archive.

In the first round, he hit another Mexican, "Rapder"; so he followed "Letra" from Venezuela and in the semifinal he hit "Valles T".

Finally met with "Aczino", together they took sparks with improvisations and high flying rhymes, but the Argentine chose a theme on feminism and gender equality and made the difference.

Wos and Aczino in the final of the Battle of the Rooster 2017. There was a rematch and the Argentine won. Photo / Archive

With this victory, & # 39; Wos & # 39; guarantees a quota for the next international final of the MC competition which, since 2005, has served as a platform for the best Spanish-language hip hop improvisers.

It was the second final that is set in Buenos Aires and that an Argentine wins. On December 5, 2013, at the Malvinas Argentinas stadium, another venue, "Dtoke", was the champion after defeating the Mexican "Jony B."