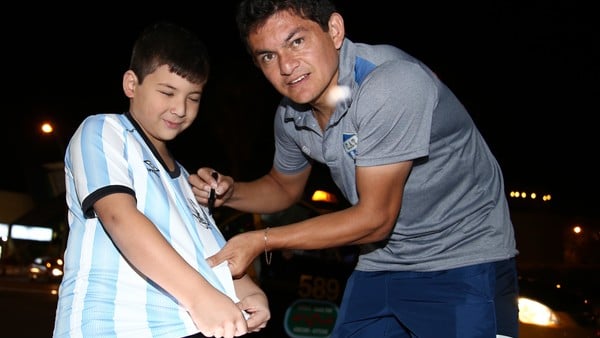 Luis Miguel Rodríguez, el Pulga, was not another player of Atlético Tucumán. He left his mark on the hearts of fans and became the club's main idol. Therefore the news of his departure struck hard. Too much, you might say. "I have to start, I have to choose a new team, take a major challenge for my football life," said the forward in farewell video that became viral from Dean's official account. But there are some who do not finish closing their goodbye. And the suspicions of a political problem grow.

"I am what I am thanks to the shirt I wore for 11 years", guarantees the pointer, 34 years old and born in Simoca, in the same recording. "I hope that in the new club I can implement everything I've done at Atlético, this is my decision, to be able to emigrate, I hope to do in Colón, the things I did in Tucumán," he says.

And refers to 11 years (with a brief hiatus in Racing de Córdoba and Newell) in which he achieved everything that was proposed: he was a top scorer of the National B, he shined in the A in international tournaments and was called to the National Team National. when it was directed by Diego Maradona. In total, he played 325 games with Atletico's shirt and scored 130 goals.

But what is behind it? "He fought with the leaders," they play some. "It's a personal matter," others argue. But the most heard comment in Tucumán is that his departure is "by politics". More precisely because after joining the Justicialista Party, it was established that the Pulguita was thinking about applying as a legislator.

The rumors grew because, coincidentally, Guillermo Acosta, the other member of the team that had joined the ranks of Justicialismo, will also continue his career in another club: he has just been sold to Lanús.

The only concrete thing is that Colón will pay $ 350,000 to keep Rodriguez's pass (and goals). Is that the player will sign a two-year contract with an economic improvement I had it in Tucumán. Numbers that also serve to explain one of the pumps of the market of passes. In Dean, besides the rumors, the most disturbing thing is how to replace a player in his category.