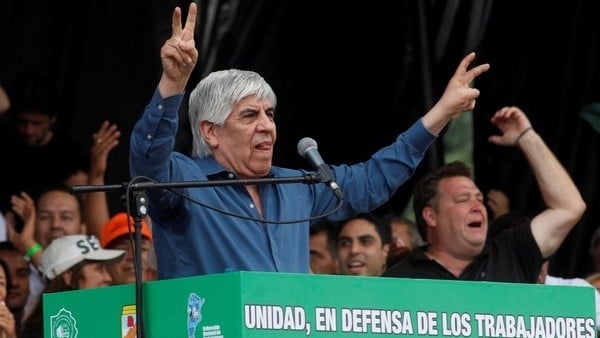 In recent months, OCA's debt has increased with AFIP, which already claims $ 5,850 million. The largest private courier in Argentina, linked to the leader of trucks Hugo Moyano, should more and more taxes and he can not go back on the right path.

At the end of last year, it owed $ 3.4 billion. In the middle of this year, debt has grown to $ 5 billion. The court has lifted the liens on its bank accounts, so you can pay your dues with AFIP. "But now you owe almost $ 1 million more," an official source said. He added: "He continues to accumulate debts and pay nothing, they are only paying wages, so the situation is unsustainable."

According to AFIP sources, OCA has a debt with the collection agency, which is in bankruptcy, for $ 3,900 million. But after the closing of the creditor meeting in May of last year, OCA continued to accumulate a post-insolvency debt, which increases each month and has already reached another $ 1,950 million.

AFIP, led by Leandro Cuccioli, was able to remove the owner of OCA, Patricio Farcuh, from the company's management bodies. But co-manager Marcelo Griffi had little work since resigning at the end of September, when Farcuh paid the salaries of employees of three companies that had no relationship with OCA and stopped paying the social and fiscal charges that month. US $. 234 million.

"This unacceptable situation we believe will inevitably be reiterated in the coming months," Griffi said at the time. "The company has a pronounced monthly deficit, which has no form of financing imaginable in the insolvent situation. In this scenario, the co-management activity is totally sterile," he added in his resignation letter.

AFIP then requested the full intervention of the company. But as there was no agreement in the Ministry of Labor, as to who would be the financial controller, the judge requested that it be resolved by the Supreme Court of Justice of Buenos Aires. But the decision is late and if you follow this path, the OCA may lose the license of the postal operator and go bankrupt.

In addition, the collection agency has denounced Farcuh in the Economic Criminal Court, where Judge Javier López Biscayart he prosecuted, earlier this month, the crime of undue retention of social security contributions, with an embargo of $ 500 million.

Since the Justice of Lomas de Zamora opened its meeting of creditors to the OCA in November last year, the road has been paved so he can pay off his tax debts. But that never happened. The AFIP allowed him to enter into payment plans for his post-insolvency debt, which he did not fulfill; and use the money seized to pay off their tax debts, which have also not been implemented.

So far, Moyano has managed to have the postal control agency continue to extend the license, despite the lack of a certificate of free debt, which is essential to renew the registration of OCA in the register of postal operators.

OCA has 7,000 employees, of whom 6,000 are affiliated with Truckers, a union that paid part of the several months of 2016, when Moyano took control of the company by force.

The government says it wants to go "completely" for mail pay the debt with the AFIP. In its most dramatic hypothesis, OCA could go bankrupt if it did not find a solution to its fiscal situation; while you could go for a restructuring and downsizing of your personnel plan, in case you get your tax situation back on track.

"Everything indicates that the OCA will overturn, but nobody wants to be responsible for it," said an official source. It will be necessary to see if in 2019 the Government has the necessary strength so that the largest private mail in the country begins to pay its taxes.