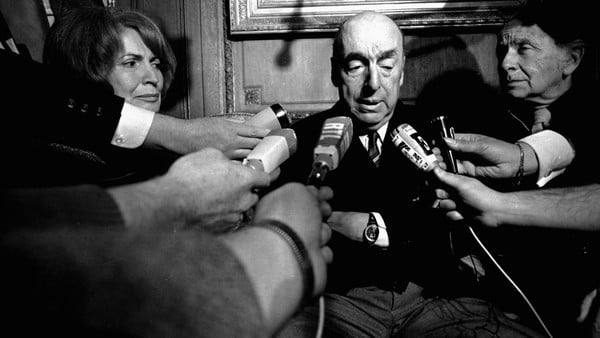 Pablo Neruda (1904-1973), Nobel Literature 1971 and emblematic figure of the culture of his country, enjoyed in the life of the recognitions and honors that brought him a work that positioned him among the most outstanding and influential artists of his century. "The greatest poet of the twentieth century in any language" has already been defined by the Colombian Gabriel Garcia Marques. But the revelation of certain nefarious episodes of his life, made him a personality questioned at the time of the Metoo: a controversy that adds a new chapter to the opposition of feminist groups to the airport of Santiago de Chile is renamed with its name. They propose, however, that she be named Gabriela Mistral (1889-1957), an icon of Latin American poetry and the first winner of the Nobel Prize in Literature in the container.

Because Neruda be a letter icon to become a monster for many of your historical followers? There are two notable facts that weigh on his memory and overshadowing: on the one hand, the rape of a maid in Ceylon (now Sri Lanka), where he worked as a diplomat, and what he himself tells in his autobiography, I confess I lived. "One morning, determined on everything, I took it off the doll and looked at her face. There was no language I could speak to him. She let herself be led by me without a smile and soon she was naked in my bed. (…) The meeting was of a man with a statue. He stood with his eyes open, impassive. He did well to despise me. The experience was not repeated ", says the poet's confession.

On the other hand, the abandonment of Malva Marina, the only daughter who had with his first wife, the Dutch María Antonieta HagenaarMaruca: the girl was born with hydrocephalus in 1934 and died eight years later, without having had the support of his father; a domestic tragedy that transcends gender issues and submerges in the mud of humanitarian failure.

The poet and socialist militant, author of Twenty love poems and a desperate songNot only did he deny his first wife the financial help needed for the care of the sick girl, that he stopped visiting his two years, but also deprived both of the exchange of citizens that would save them from the difficulties of postwar Europe in the late 1940s.

Gabriela Mistral The poet won the Nobel Prize for Literature in 1945.

Now the project to change the name of the airport – which has been called Comodoro Arturo Merino Benítez since 1980 and since 2004 has been the subject of several motions to be renamed – must be revised in light of the accusations that weigh on the poet. The design to call Neruda the airport had parliamentary support from the Culture Committee of the Chamber of Deputies of Chile,

Among those who criticize is the journalist and MP of the left-wing humanist party, Pamela Jiles. She met the author of General Corner As a child, his grandfather, Jorge Jiles, was the poet's lawyer and helped him legally change his name, Ricardo Eliécer Neftalí Reyes, to the Pablo Neruda. Jiles argues that "There Are Not Times Given to Honor a Women Abuser"

Across the ring, there are personalities like the poet Raul Zurita, National Literature Prize of Chile, which is inclined to dedramatize the controversy "Chile would not be Chile without Pablo Neruda. It would be something else, "the writer told a local newspaper, and pointing to criticism, said that" it is a praise of ignorance, it is barbarism. "As an example, she pointed out that a historian had celebrated that she had never known private life "We took Plato and disarmed the whole history of the West," he said.

As of 2010, four motions have proposed changing the name of Arturo Merino Benítez Airport to that of Pablo Neruda: the last one was presented on July 15, 2014.

From the Neruda Foundation, executive director Fernando Sáez minimized the controversy and assured that the poet "always had enemies", but his behavior with women does not detract from the value of his work.