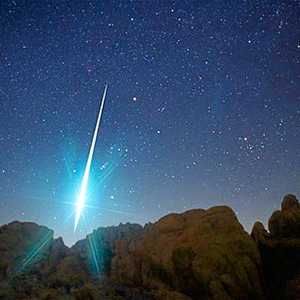 Train your eyes to the sky, as one of the most spectacular meteor showers of the year is set to light up the skies.

Emerging from the Gemini constellation (hence the name), Geminid meteor shower occurs at a similar time each year, when the Earth passes through the "tail" or a cloud of debris from an asteroid, which is unusual because Most meteor showers are formed. from the tail of a comet.

John Daicopoulos, a professor of physics at James Cook University, said the debris trail of an asteroid or comet is similar to a cloud of dust coming from a car passing a dirt road.

"Earth orbits the sun and, every year, the Earth goes through the dust cloud, which is essentially the tail of the asteroid," he said.

"We are close to a new moon, and the shower is just before the moon reaches its first quarter, which is good, as meteors are not necessarily the brightest things around, so you do not want a big bright moon, you want a dark sky. "

Daicopoulos said that when it comes to optimal viewing times, it's a bit of a "guessing game."

"You never know in what part of the cloud or debris the earth will pass, so the best way to see the meteor shower is to simply step out and look up.

"Geminids will be fast – they'll stay in the sky for a few seconds. You never know what's going to happen in a given year, but you can usually see anything from one to three per minute."

"There may be a big fireball that night, or there may not be – but you will not see if you're not looking at the sky," he said.