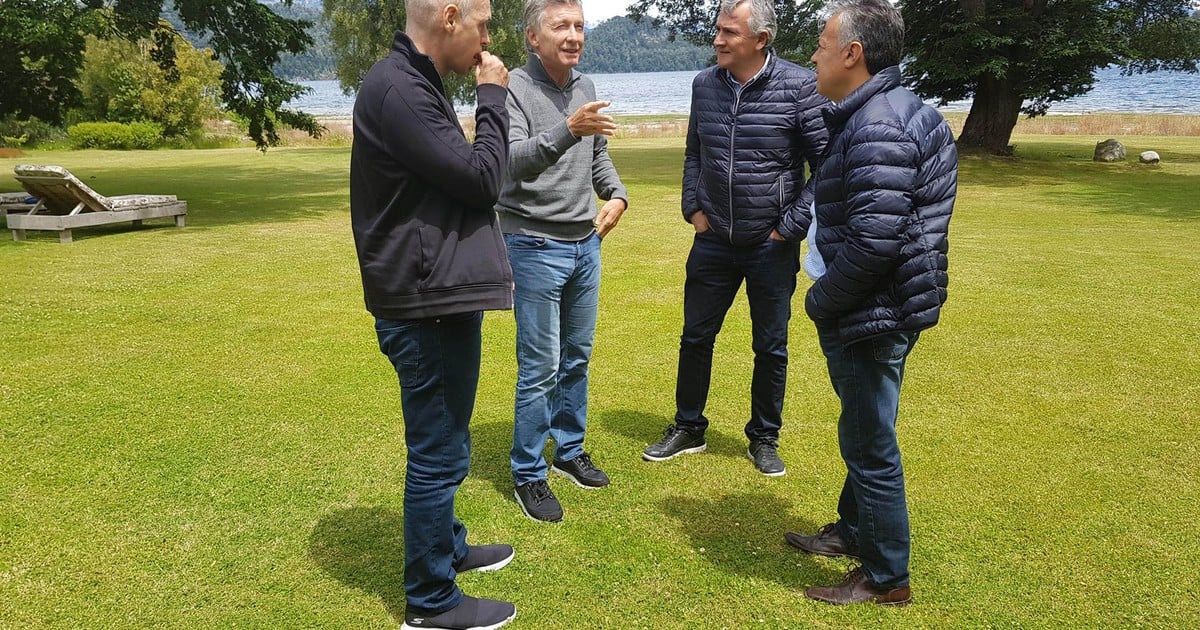 It was no longer a secret for voices. Mauricio Macri want the governors of Jujuy and Mendoza, the radicals Gerardo Morales and Alfredo Cornejo, unite their respective provincial elections with the national to pull votes for the re-election plan, which is already underway.

However, they were not explicitly informed during the lunch promoted that they shared this Friday in Villa La Angostura, where the president intercalated to break with management meetings and other elections.

The mayor of Buenos Aires, Horacio Rodríguez Larreta, and the deputy chief, Diego SantilliThey were also part of the meeting. It was no accident: the city was the first district to move towards unification with the national vote.

The meeting in the exclusive neighborhood of Cumelén, where Macri remains since December 22, lasted more than three hours. There was a relaxed atmosphere, steaks and salads. The first lady Juliana Awada He also talked to the visitors.

There are no stipulated dates, but customers – above all, PRO's – want to delay the settings as much as possible. "There is consensus that the strategy that best benefits the national scenario will be defined," reflected one of the diners in what seemed a clear nod to hypothetical unification.

At Casa Rosada they believe that the opposition is more obliged to show their letters and their menu of candidates. "They – by Cornejo and Morales – are still very well in their provinces," marked the field of macrism.

The first part of the meeting was consumed by management issues. Each gave a detailed detail of the news in each district. Cornejo, who can not compete; Larreta and Morales they know each others.

Macri, however, referred to the economic situation and all hailed as good news that the dollar would have drilled the floor of the band stipulated by the Central Bank. "Mauricio explained that little by little the economy begins to adapt"they said. In government, they are enthusiastic about the recovery of the Brazilian economy.

Radicals also have not made the suggestions they make on the down side. They want the interest rate faster so that consumption is reactivated faster.

"The president explained – and we all agree – that little by little the situation will improve," said one of those present. Radicals also want to accelerate – as far as possible – economic recovery.

Macri's allies, as some referents of the PRO of the "political wing" are kind enough to lower the rate. They believe that the opposition can become more competitive if the recession continues longer than expected.

The radicals see with good eyes that Maria Eugenia Vidal unfold his election in the province. "It would be very powerful," The Clarín was surpassed by the leaders of the UCR.

The leader of Buenos Aires rests shows in Chapadmalal until Monday I would start reviewing this strategy with the rest of the PRO's small table at the meeting scheduled for January 21 at the Balcarce 412 macrista bunker.

The right hand of the governor, Federico Salvai, who is also on vacation in Cumelén with his wife, Social Development Minister Carolina Stanley, friend of Awada, He played paddle with the president, but they do not talk about politics.

Morales had been solicitous from the beginning to share the ballot with the president. Although in their environment they believe that they would give up 10 points – due to the poor image of the Head of State in the North – they believe that the re-election of the governor He is not in danger.

Cornejo, on the other hand, should special college of the governor to unify the electoral calendar that in Mendoza is governed by law.

The PRO intended to make available the premature release of the mayor of Luján de Cuyo, Omar De Marchi, of the Democratic Party, first allied macrista in the Cuyana province.

Cornejo, who has no re-election bet on his Minister of Economy, Infrastructure and EnergyMartin Kerchner, and the mayor of the capital Rodolfo Suárez. Julio Cobos, meanwhile, flirts with De Marchi and does not rule out competing on his own.

Cornejo could return to the Chamber of Deputies leading the list in his district and it is discounted that if so, and if Macri is re-elected, he will play a key role in the lower house, such as parliamentary authority or interlocking.

Anyway, the head of the UCR wants more space for his staff in the national cabinet. At most, UCR is eager to occupy the vice presidency. In Casa Rosada they do not dismiss Cornejo as minister.

Finally, Macri and the governors reviewed together the political news of the districts that aspire to uproot the Peronism of Córdoba, Santa Fe and La Rioja.

The risk is that internal strife will conspire against the ruling coalition. In Balcarce 50 they do not have much hope of beating Neuquén – Horacio "Pechi" Quiroga will be the candidate – nor Río Negro, where the PRO candidate is Sergio Wisky. The President received the two this week.

In the case of Cordoba, the main radical references Mario Negri, despite the pretensions of his also co-religious Ramón Mestre.

"He is young and has time," they say about the mayor of the capital Cordoba. In the Casa Rosada it generated bad humor that Héctor Baldassi "Cut off" and will close an agreement with Negri without consulting them. "Let's do what Cambiemos does," they said.

With the meeting with the UCR referents, the government is committed to consolidating the Change while they finish discussing the strategy. Cabinet chief Marcos Peña – who did not travel to La Angostura despite the radical request – met on Thursday. Elisa Carrió