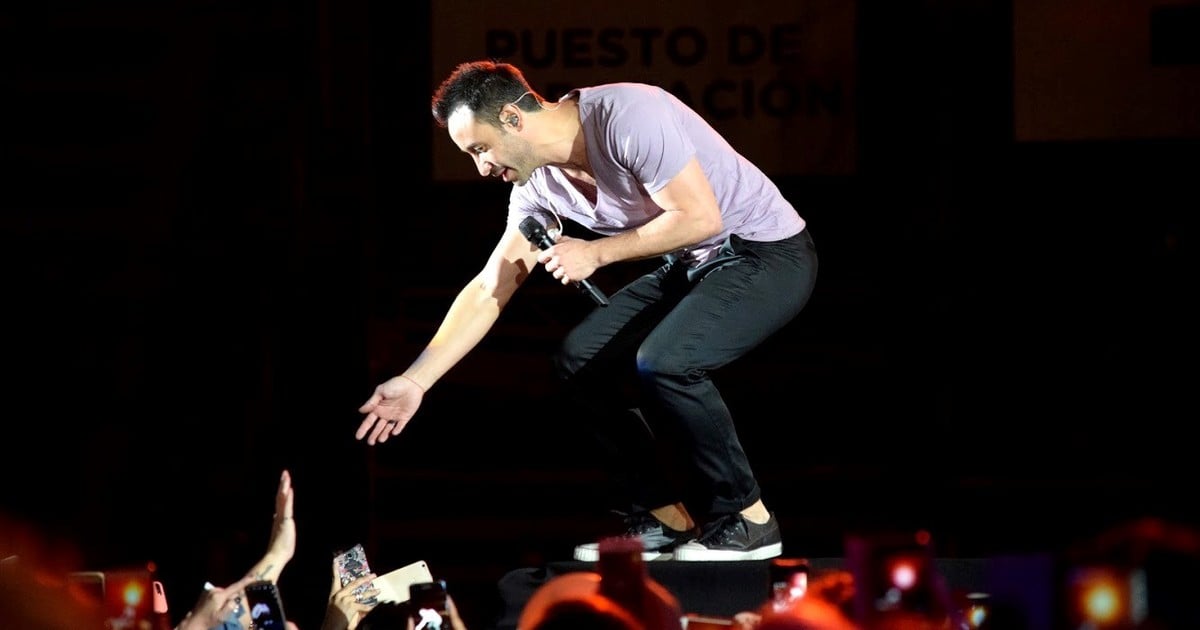 In the hypothetical case that some distract, among the 40 thousand participants Show this hot Saturday in Vélezwill ignore Twenty years who were crowned that night, a seducer and charismatic Luciano Pereyra (remarkably skillful to dance and unpretentious to flirt live with his fanatics) would not take long to let him know. "Today is a day of celebration," repeated the ambassador of folklore so many times during the three uninterrupted hours of an open-air holiday.

Just one hour from the schedule announced for his debut at a stadium with Life in the Wind Tourwhile the figure of a drone flew overhead with an aerial view of the stalls and the false fog (the product of a powerful smoke machine) merged into the ceaseless scream of a battalion of women, then appeared and a platform beneath the stage, the musical icon

To the sound of the first stanzas of I like to love you and without a gust of wind running there, the singer decreed with a serene expression in his smile the beginning of a party "in style." And like all celebrations, he warned, "they're made with friends." It was then that after having warmed up with themes like Without witnesses, I can not forget you and Red dress, the first foreign guest came on the scene to sing a sweet version of I will, I remember the novel's curtain I hope my. "She is Camilla Gallardo and is the great voice of Chile," announced on the international star of curly hair and angelic face emerged from the Chilean version of reality The voice.

Author of endless lyrics traveled by love – which he joined as a potpourri in the middle of the show -, the native of Luján gave two unreleased songs in a kind of live karaoke. "I wish all of you were the models for this new video," he warned with two giant screens behind whose function was for the audience to read the chorus from anywhere.

Aerial view of the stadium of Vélez, full of fnas that celebrated the twenty years of race of Luciano Pereyra.

Debut Stay with me, it was the turn of Marry you and with that the rascal request of a Luciano capable of making all those masters blush accompanying their partners. "All men could take advantage tonight to ask their wife for the wedding," caused those who at the end of the show received a double platinum box for the more than 40,000 copies sold in physical and digital format, as well as a distinction for O sold off since he began his tour in Chile, Uruguay, Paraguay, Bolivia and the United States.

After 120 minutes in which the sound of the charango, the accordion and the violin took the different climates of the night, the singer – whose costumes total-white of shirt and pants caused sighs, he gave way to the emotion.

Sensitized to tears, in the performance of Your hand his more human side was emerging. "When we unite, we Argentines can do many things," said one Luciano, who, separated from the role of show man, he asked them to turn gifts thought of for him into donations to create a crusade of solidarity.

Then and among the white balloons multiplied in the audience, it was the turn of the tribute to his godfather in the profession. The image of the late Horacio Guarany once again filled the first with emotion Festilindo, who honored him in every stanza of Memories of an old song.

At the heart of the heartthrob and in front of the vast majority of the women in the field, holding placards with phrases like "Lu, you're my polyamory" – there was also room for a fun round trip that raised the temperature up to 23 degrees . Chosen from the audience by an impressive wreath of lights, a 50-year-old lady at the foot of the stage tossed the underside of her lingerie causing Luciano's joke: "How did you know that blue was my favorite color?"

Guest of the house, the Chilean star Luciano Jara was applauded with his version of Zamba to forget like the singer Antonio José (also act of opening of the show) delighted with its When you fall in love.

And if something was missing for a final two decades of Luciano Pereyra's triumphs, it was the artistic (and personal) intervention of his friend and colleague Soledad Pastorutti with whom, at the request of the public, he merged his talent into another version of success. Guilty or not by Luis Miguel.

"This is not politics, this is music and music unites us," he said, while the jury La Voz Argentina, in the same vein, invited the reflection: "Although we have to compete for different companies, there has never been a crack between us. We should be happy when the other is going well, in all areas."

Musical promise from childhood, this time not only enchanted with their classic ballads, but, motivated by the fusion of this genre with urban rhythms and tinctures of Latin pop, exploded with swing their qualities for dance. The crowd, grateful for his hip movement, applauded standing up.