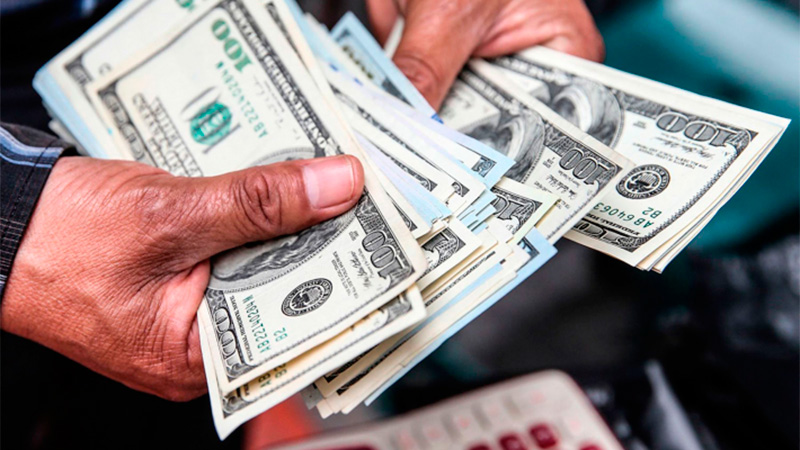 In the wholesale circuit, the dollar rose again yesterday, 3.9%, closed at $ 39.05 and was at the edge of $ 40. The price accumulated a 7.9% increase in just one week of the markets. Several factors were brought together to explain the awakening of the American currency. Anticipation at the end of the month, corporate coverage, higher demand for future dollars, lower exporters' supply, expectation of low rates, all tempered with country risk that does not yield, negative economic data, disturbing withdrawals, shutdowns and security fiasco for the river -Boca the days of the G-20, reports the newspaper Ámbito Financiero.

1- Greater demand for a future dollar: Friday's holiday in the city and the question of whether or not it will be operated by the G-20 summit on Thursday meant that it practically anticipated the exchange rate next month. Companies surpassed $ 1.5 billion, with an implicit rate of 60% for November, which closed at $ 39.50. The Central Bank would have intervened, selling US $ 600 million.

2- Coverage of banks and companies: not so much in the spot, but in the future. As in recent days, and to reduce exposure in local currency, foreign entities and corporations are dollarizing in an estimated percentage of up to 30% of their positions, in order to close the end-of-year balances.

3- Reduction of exporters' supply: only US $ 130 million would have been the export offer in recent days. Almost a quarter of the usual volume. They estimate that as of next week the square could be normalized with the beginning of the sale of the wheat.

4- Expectation of low interest rates: although the BCRA remained practically unchanged in the Leliq rate at 61.24% per annum, and predicted that it could fall by 60% if inflation expectations fell for the second consecutive month, according to the REM. The last survey will be known next week and the previous one has already shown a compression.

5- Increase in money supply: the last Lebac auction generated a monetary expansion of US $ 122,234 million. Part was neutralized with Leliq, part with Treasure notes. At Central, they estimate that due to a seasonal increase in demand for money, they could expand a $ 82 billion network. A monetary ratchet relief is expected, while still cautious, and the dollar / rate exchange will be monitored.

6- Carrying trade disarmament: The rise in the dollar last week consumed two months of rent for a fixed term or a letter. A stimulus to close positions, having recovered part of the losses of the year in October and early November, in a negative global picture for the emerging markets.

7- Country risk that does not fall: Argentina's sovereign bonds continued to yield ground and yields of some species, such as AA25, surpassed 12.5%, just below countries like Belarus, Rwanda and Cameroon. The other side is the country risk firmness measured by EMBI + Argentina, yesterday at 690 bps.

8 – Negative economic indicators: the last battery of indices released by INDEC with declines in economic activity widened the window of doubts about the form of the letter that will leave the recession. The ruling party believes it will be a V, while several private economists and financial analysts are more inclined to a L.

9 – Negative political indicators: they did not fall well, mainly overseas, and a few days after the G20, the images of the security operation fiasco for the final of the Libertadores. Nor has it contributed to the paralysis of the aviation corporations that complicate the flights of the airlines, to which was added the measure of force of the carriers announced for today, that will paralyze trains, buses and subways between 4 and 7.

10- Ricochet Cristina Kirchner in the polls: the latest opinion polls on the image of the main political leaders were worrisome for the market, with deterioration for Mauricio Macri and an eventual triumph of the former president in internal theory of Peronism. They affirm that this possibility constitutes the main fear for who has to finance Argentina.