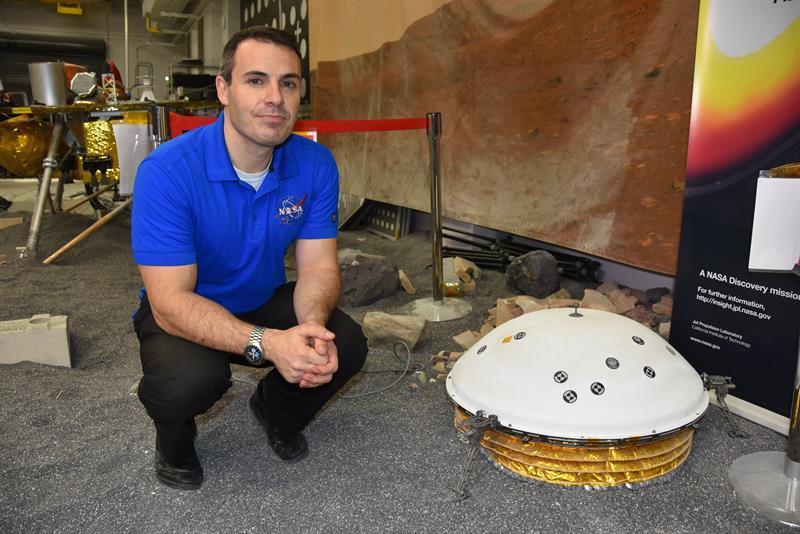 After covering about 300 million kilometers, NASA's InSight mission will reach the surface of Mars on Monday and install a seismometer and a thermal sensor to decipher the "deep interior" of the so-called "red planet."

This stationary module, which took off on May 5 from Vandenberg Air Force Base in California, will use a mechanical excavator to drill down to about 5 feet deep and measure its internal temperature, plus any internal movement with the help of a seismograph.

"It is the first mission that will study the deep interior of Mars," said Fernando Abilleira, deputy director of design and navigation at InSight and part of the multidisciplinary and international team that makes up the mission.

"By studying the propagation of the waves beneath the surface of Mars through its seismograph, we will have more information on how the planet has evolved" in the last 3 billion years, he added.

Abilleira, with 17 years of service in NASA space projects, is part of the engineers and scientists who will study at NASA's Jet Propulsion Laboratory (JPL-NASA) in Pasadena, California on Monday, the "vital signs" of the neighboring planet, as their "pulsations, temperature".

He added to the Spaniards that through a "precision tracking" he will observe "even the reflections" during the two years of "primary experiments" that the mission will entail.

To increase knowledge about the formation of Mars and other rocky planets such as Earth, the Seismic Experiment for the Interior Structure (SEIS), a seismometer manufactured by the National Center for Aerospace Studies of France (CNES), will be used. "any movement on the surface of Mars," explained Abilleira.

The vibrations that will be recorded by the SIX can be caused by the impact of a meteorite or a small earthquake, although the seismic activity of the "red planet" is smaller than that of Earth.

"By studying the motion of waves propagating below the surface of Mars, we can have a better understanding of the composition, structure of the nucleus, the mantle, and the crust of the planet," he added.

The other tool that acquires prominence is the Physical Properties and Heat Flow Probe (HP3), built by the German Aerospace Center (DLR), which will be deployed on Martian soil about 5 meters deep.

"This instrument has thermal sensors that will collect information about the thermal activity of the red planet," said Abilleira, who pointed out that Spain contributed to this mission with an environmental station (REMS) equipped with meteorological sensors for the Martian environment.

The spacecraft trajectory trainer who traced the path of the "Curiosity" robot, which arrived on the red planet in August 2012, points out that "landing on Mars is very complicated."

After a journey of more than 6 months, the InSight mission will cross at 3 p.m. on Monday, Eastern Time, the Martian atmosphere and will land on the surface. A robotic arm will land the scientific instruments that will be installed on the Martian soil.

Part of the mission, two Mars Cube One vehicles (MarCO), which will for the first time be tested in "deep space", as Abilleira said, and with the support of miniature components will test a new method of transmitting information to Earth. .

The Insight mission will focus on unpublished research that will provide insights into how the Solar System originated approximately 4.6 billion years ago and how life was distributed in it.