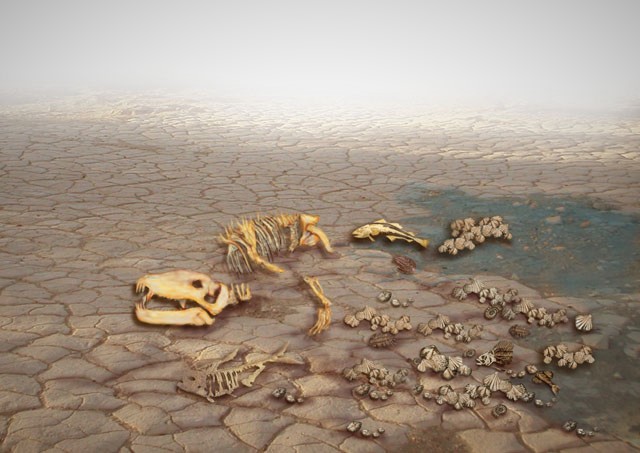 Scientists say the fast-warming oceans played a key role in the world's largest mass extinction, 252 million years ago, and may point to the risks ahead in an era of equally rapid climate change.

The latest analysis, published in this week's issue of Science, brings together computational modeling of ancient oceanic conditions and a closer look at species characteristics to fit new pieces into an ancient puzzle: What were the factors behind the Permian- Triassic, also known as the Great Death?

The disappearance of the Permian-Triassic overcame the extinction event that killed the dinosaurs almost 190 million years later. About 70 percent of terrestrial species were extinct, but the number of victims was even higher in the seas of Earth. It is estimated that 96 percent of marine species have been extinguished.

One of the main factors was an eruption of volcanic eruptions in a region known as Siberian Traps, which contributed to an increase in atmospheric levels of greenhouse gases. This contributed to uncontrolled warming in the oceans too, probably fueled in part by a release of underwater methane.

To evaluate the impact of ocean warming on ancient species, a team of researchers at the University of Washington and Stanford University analyzed models of oceanic conditions and animal metabolism and verified the results in relation to the traits seen in ancient fossils and also in the modern. species of the day.

"This is the first time we've made a mechanistic prediction about what caused the extinction that can be directly tested with the fossil record, which allows us to make predictions about the causes of extinction in the future," notes author Justin Penn. , a UW doctoral student in oceanography, said in a statement.

Computer modeling has shown that the hottest oceans have lost about 80 percent of their oxygen. About half of the ocean's ocean floor, especially at deeper depths, has become completely oxygen-free.

What effect would these conditions have on marine species? Penn and his colleagues began by combining the ancient conditions with the traits of 61 modern marine species that parallel creatures of the Permian era, ranging from corals to sharks.

They found that the effects of oxygen depletion would have had the greatest impact on species living far from the tropics. The species that had the best chance of survival were those that could change their habitat closer to the equator.

"Very few marine organisms remained in the same habitats as they lived – either fled or died," said co-author Curtis Deutsch, associate professor of oceanography at UW.

To confirm the findings, Stanford expert Jonathan Payne and Erik Sperling looked at the distribution of species in the Permian era, as documented by the Paleoceanography Database, a virtual archive of published fossil collections. The analysis confirmed that species in high latitude habitats suffered more.

Penn said the geographic pattern and computer modeling point to the "killing mechanism" of the Permian species. "The agreement between the two indicates this mechanism of climate warming and the loss of oxygen was the main cause of extinction," he said.

The results also agree with a scenario Deutsch has previously defined for extinction, in which ocean warming has led to an acceleration in animal metabolism, while the oxygen levels needed to supply this mechanism were decreasing. This scenario would increase bad news for high latitude species.

"Since the metabolisms of tropical organisms were already adapted to reasonably warm conditions and low oxygen, they could move away from the tropics and find the same conditions elsewhere," explained Deutsch. "But if an organism was adapted to a cold, oxygen-rich environment, then those conditions ceased to exist in shallow oceans."

Computational models suggest that low oxygen conditions would represent more than half the loss of Permian-Triassic diversity in marine species. Researchers say the remainder of the effect can be explained by other factors, such as ocean acidification and the rise and fall of photosynthetic organisms.

Penn noted that the models could be applied to future ocean conditions as well as past conditions with troubling results.

"In a business-as-usual emissions scenario, by 2100, warm-up in the upper ocean will have approached 20% of the warming at the end of the Permian. And in the year 2300, it will reach between 35 and 50%, "he said. "This study highlights the potential for a mass extinction stemming from a similar mechanism under anthropogenic climate change."

The research behind the Science paper, "Temperature Dependent Hypoxia Explains Biogeography and Severity of Mass Extinction in the Final Permian," was funded by the Gordon and Betty Moore Foundation and the National Science Foundation.