He killed a dolphin in danger of extinction, he walked on his ATV and ate 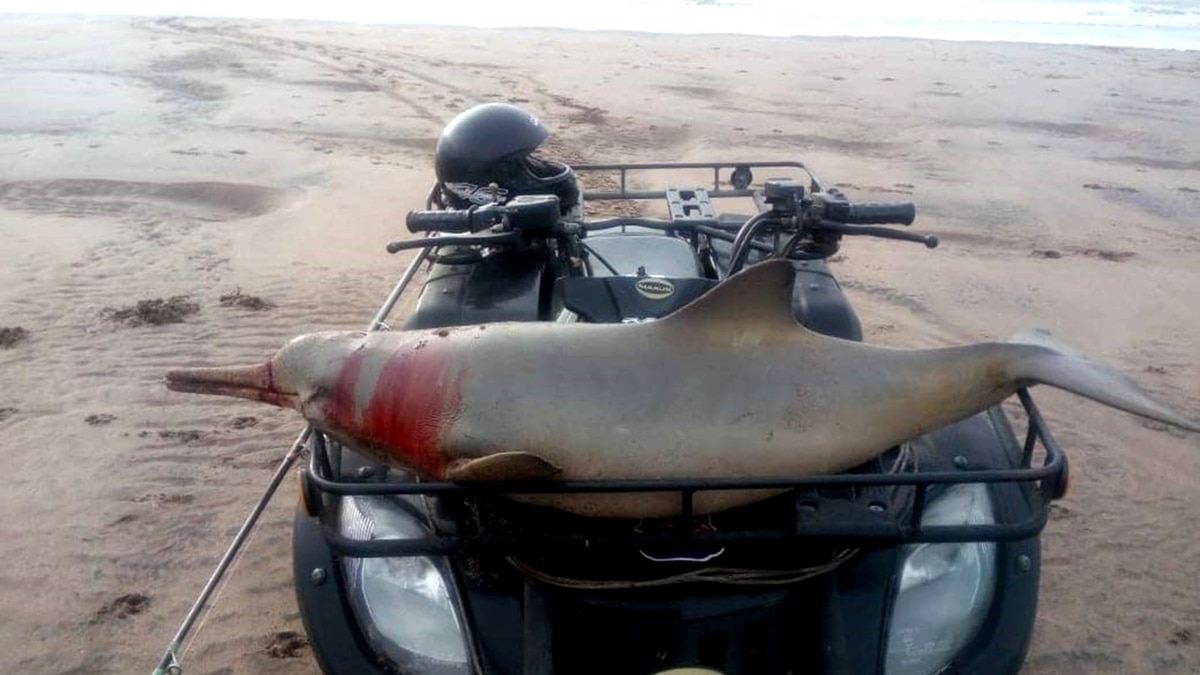 The case generated concussion. Gabriela Vaskoboinik, a neighbor of Coronel Dorrego, a city in the southern province of Buenos Aires, has published two photos on her Facebook account: a wounded, bleeding dolphin aboard an ATV on a beach backdrop. In her post, the woman denounced a fisherman in the area for displaying the dying animal as a trophy. The pictures were horrifying.

"After he killed him and left him bleeding to have his pictures taken, he went to the dolphin all over the Marisol seaside resort on the ATV," he explained in a conversation with local media. The. In his statements, he assured that witnesses confirmed that the man had killed the dolphin with a boat hook and that he had traveled all over the beach, bragging about his prey.

"It happened at the mouth of the Quequén River," he reported, "several people who were a few feet away from this man wrote to me, right in the mouth, and saw when he killed the dolphin with the hook of the boat. the animal is injured and has nails in the back, beyond which he could have reached the shore because he was sick, his death was unnatural, "he said.

The woman specified that the man she reported published the photos on their social networks, but then erased them and released the pictures for a just cause. "I uploaded the photo to be aware because it is in danger of extinction, I am against hunting. No need to kill him or take dead pictures, nor ride an ATV along the beach. "Its publication sparked widespread outrage that led to the intervention of the Provincial Directorate of Flora and Fauna, which in turn revealed that the province's forest rangers were sent to the area to investigate a case of animal abuse, where they worked an infraction record .

The fact acquired international significance. The fisherman was found: his name is Rubén Vicente and he is native to Oriente. In dialogue with Lu24, a radio station in Tres Arroyos, gave his testimony: "I went fishing in La Boca as always and I took a whiting." After a while I had a big well, thinking it was a croaker, took me to the river side. I fought for a while and after 40 minutes I took him close to the beach, the fish was not good and I could not get it out, and in the end I caught him jammed in the descent and trapped. and I faced the bench again, I tried to leave it and throw it in the water twice, but it took 10 minutes and it was still there, so I caught it. "

"It's not like they say I killed a dolphin, I did not walk around town, I took it home and that's what happened," he apologized. "Three days ago they had seen, it's a fish that does not come to the beach, when I saw the tail I thought it was a shark, I want to clarify that it's not a dolphin, it's family, I want it to be clear, it's a predatory and is in extinction, but that was not the intention, the police came to my house, they pressed me, the OPDS de La Plata came to see me, "he added.

The OPDS is the Provincial Agency for Sustainable Development. The entity confirmed that it will apply a sanction to the fisherman that "can reach one million pesos" and notified that in the coming hours will give intervention to the area of ​​Fauna of the Nation, according to the agency Telam. As Rubén Vicente explained, what he got was a dolphin from the Franciscan family. Martín Boccacci, Under Secretary for Environmental Planning at OPDS, said in a statement that it is "of an endangered species protected in the province of Buenos Aires and declared a Natural Monument, which is the highest preservation category"

The agency said that by-catch is the main threat of the species: between 500 and 800 specimens die in the province of Buenos Aires because of these practices. If hunting continues, the population may be extinct by 2050, as OPDS experts warned.

The man said that the neighbors soiled him for free, that no one came out to defend him and that he did not like the way they treated him. "It made me feel bad, I should have hidden myself and been lying down, but That's it. I ate and the remains were thrown into the sea. I have nothing to hide. It was an accident, "he confessed.