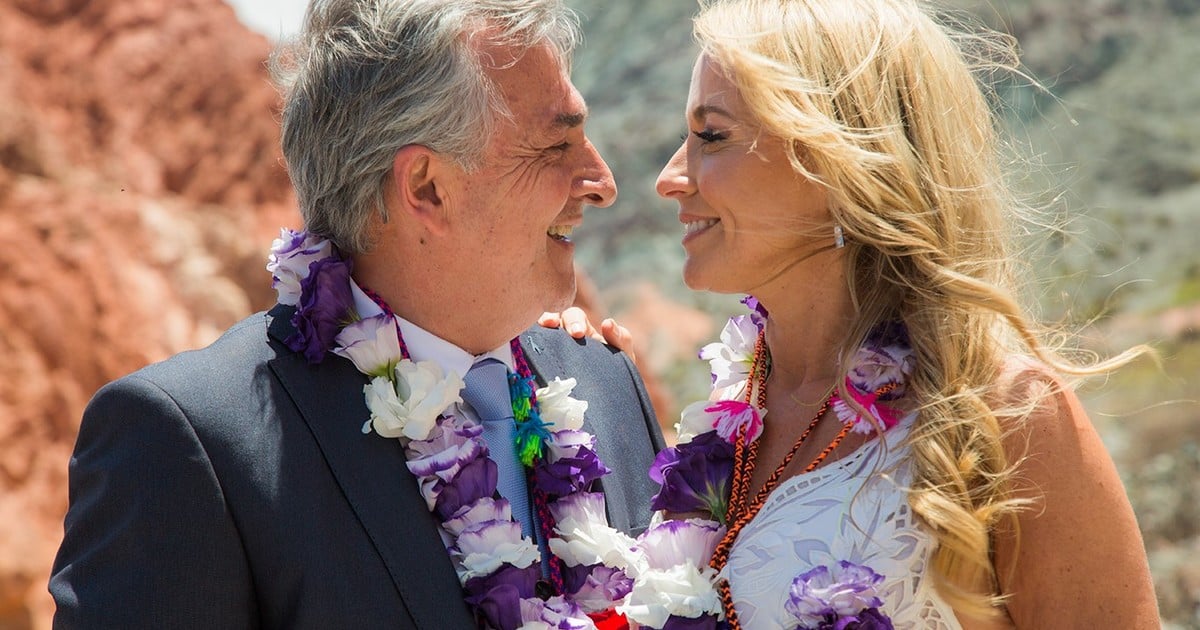 The radical governor Gerardo Morales He did not want to delay the marriage with his partner, clerk Tulia Snopek, and as she is still legally married – and the divorce is still mired – they opted for an indigenous ceremony to celebrate the union on Friday between the hills of Purmamarca.

The ceremony began with the first offering the couple made to Pachamama, before the link, to ask that "whatever this new couple and family live and undertake has the protection and accompaniment of Mother Earth and all others." energies. "Relatives and family members participated in this ritual spiritual guides Wanka Wilka, Kusikilla and a Peruvian shaman.

Around 800 guests participate in the party, among them leaders and local militants of the UCR – Let's move to the city located in the middle of Quebrada de Humahuaca, 65 kilometers from the capital Jujuy.

The marriage of Gerardo Morales in Purmamarca.

The altar is made up of fresh plants in the form of arches, among which molle, rue, and rosemary, to "purify the spirits" and that marriage "is protected from harm."

After being "smoked and purified" with a preparation of herbs and coca, incense, myrrh and copal, the link is crowned when exchanging bowls of seeds and flowers, promising "a life of labor and union."

"This is the beginning of our family," Morales expressed and expressed his "pride" for his companion who said: "He had the intelligence and integrity to defend this love."

In addition, he thanked the communities that accompanied the marriage ceremony. "May Pacha enlighten us and give us the wisdom to continue fighting for our love and thus have a future as a family," he said.

After the ceremony, the guests take the party to the Santa Rosa Club, where they share a creole lunch with lamb meat from the Jujuy puna.

The president's love story and his girlfriend have the spice of a romance. To begin with, Tulia is the sister of the Peronist senator, Guillermo Snopek, Engaged with Morales.

This year His fight came to Congress, where the day of the abortion session Snopek reported that his now-brother-in-law threatened him through a phone call. "He told me that if I got involved with his wife, he would allow him to get involved with my family, which has to do with a social networking publication where I repudiated his personal life for political reasons," Snopek said.

The big day has arrived!
Our union ceremony with Tulia Snopek will have this imposing landscape: Los Colorados in Purmamarca. It is at noon, when the sun shines on us with its rays, so that we both receive its energy and protection. #TuliaYGerardo. pic.twitter.com/WDRkcjJRtX

The president responded with a tweet in what he called "pathetic." "Pathetic. The Senate is not a family court. Embarrassed for having invented more stories for the Great Brother-in-Law than for serious debate. Focus on the issue of abortion. If he does not get over it, go to the psychologist, "he snapped.

She is still legally married to Carlos Marti Coll, a well-known lawyer from Tucumán with whom he is in contention for the property. The situation worsened with Marti Coll's arrest in a criminal case – by a van owned by him – something the lawyer and former rugby-tucumano denounced as a "maneuver" of Morales to "break"And finally adhere to divorce.

Gerardo Morales with his Tulia Snopek.

His partner defended him. "When there is a couple, you can often ask how the issue is going, but there was not a meeting where the governor gave instructions or something (so). The whole process was taken by me and I have no professional relationship with the president, "Snopek said.

Snopek and Marti Coll were married in 2015, though they never lived together, and in March of this year she began the divorce process. Now there are two lawsuits in progress: one in Jujuy and one in Tucumán.