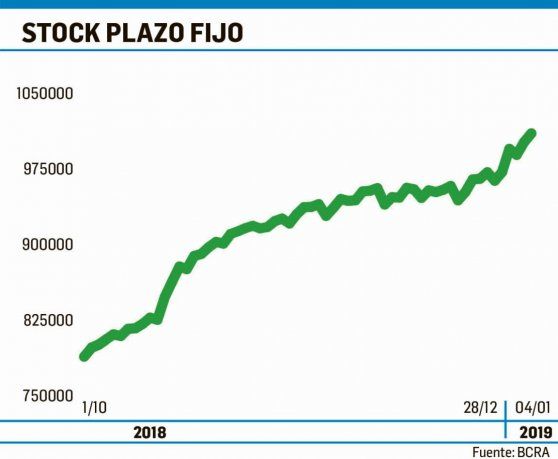 Federico Furiase, director of consultancy Eco Go, said: "What you see is that there is an acceleration in the fixed-term growth margin after a pause for the increase in transactional demand for money in December." The economist explained that this increase "occurs with a dollar close to the floor of the zone of nonintervention and with interest rates that are in the range of 3.7% per month, above the expected inflation for January (2.5%)." "This combination of the exchange rate and positive real rates is an important point to analyze the result," he added. In any case, he affirmed that "this is a very small balance; It will be fundamental to maintain this growth because it encourages the renewal of Leliq."

The problem is that this phenomenon will occur in a context in which the Central Bank is likely to continue to gradually reduce interest rates while seeking to maintain exchange rate stability. "Risk this stability would jeopardize the evolution of fixed deadlines and would undermine the renovations of Leliq," warned Furiase. In addition, he noted that "most of the increase comes on the side of fixed wholesale terms, something that has been happening since October when the new currency plan began." And he said that "you have to keep in mind that if the dollar rises $ 1.5 in January, you will eat the profit of the fixed terms; It will be fundamental to see the BCRA's ability to continue to lower the rate without harming this process" .

Since October 1, BCRA has begun to implement a new monetary policy framework, based on the control of aggregate variables, in which the interest rate has become an endogenous variable, determined by the supply and demand of money. . This new system aims to reduce high inflation, which accelerated throughout 2018 due to the currency crisis. For this, the organization led by Guido Sandleris decided to generate zero growth in the monetary base until June this year, an objective that has been surpassing until now. And to achieve this goal, Leliq uses, with attractive rates, the main instrument of sterilization.

Currently, the exchange rate is operating very close to the ground floor (yesterday at US $ 37.33) and analysts expect the BCRA to reach the market with daily sales of up to US $ 50 million, something that at the moment was not necessary, but it is possible in the short term. In the midst of this process, we will have to see the balance between rates and the exchange rate that allows fixed-term deposits to continue in this growth process.