He was elected holder of a school in Oberá, Misiones. His name is Fernando Ezequiel Flores and he won a year of free energy. He decided to do something special, a gesture that moved all his companions. 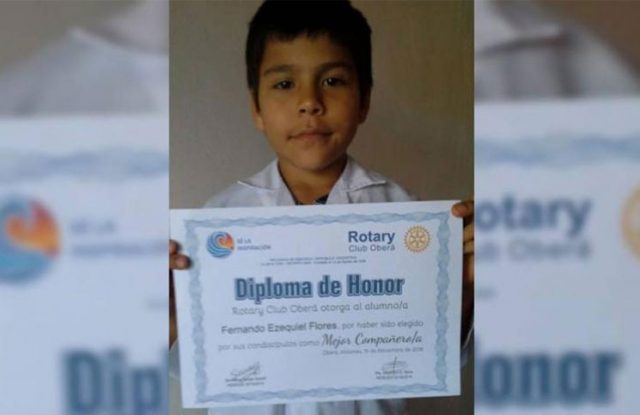 Fernando Ezequiel Flores is a sixth year student at a school in Oberá, Misiones. He obtained the best average of his course and, in recognition, received one year of free electricity. But he had a gesture much support with another person. He decided to give his prize to a companion who went through greater needs.

His father, Esteban Flores, told Cadena 3 that his son was not happy to know that he won the Oberá Electric Cooperative Limited (CELO) award. What was given by having the best average and being signaled by the 395 School of Oberá.

"When he read the news, he just did not feel happy, and he tells me that he wanted his partner Yamila to win, since he made a great effort to get the prize and help his family with electricity," he said.

"Although it's a bit complicated and we can not hurt, the prize for us as parents is that he feels happy with what he did. These things make us think that in this rather complicated and mean society we are not doing things as badly as a father, "reflected Esteban.

And with this gesture which he had for his companion, the Rotary Club Oberá highlighted him with the diploma of best companion after the election of his friends of sixth grade.