Earthrise 50th Anniversary: ​​"We went to explore the Moon and discover Earth" 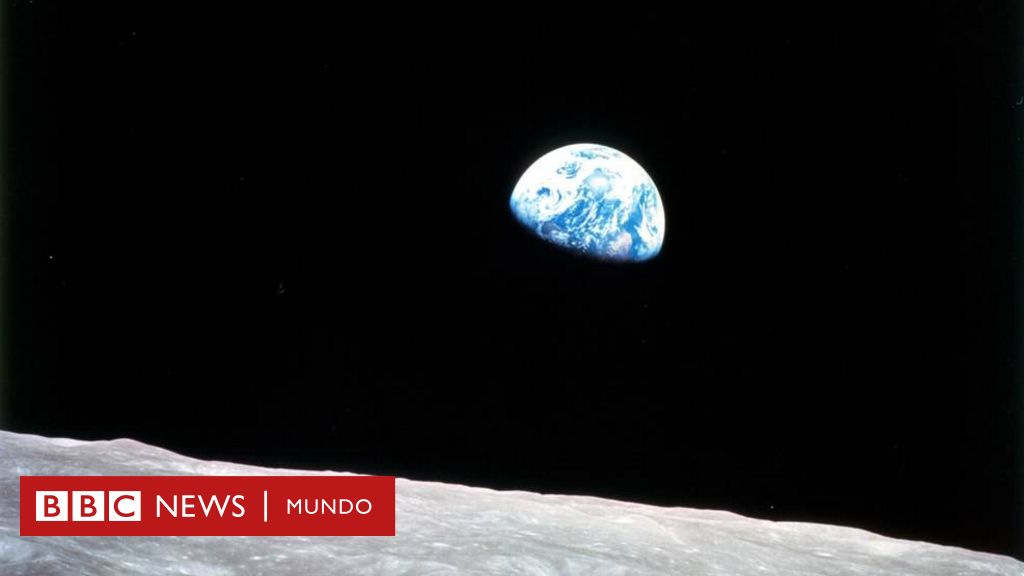 Seven months before the Apollo 11 mission landed on the moon, another space trip made history on Christmas 1968.

Apollo 8 was NASA's first manned mission to travel to our satellite.

The astronauts William Anders, Frank Borman and James Lovell They circled the moon 10 times without landing on its surface.

The mission was to test the efficiency of the Apollo system.

But one of his great legacies was the fruit of a moment that no one, not even NASA, had planned.

Anders is the author of Earthrise, or "leave or Earth's Dawn ", the photo showing the blue and full of life of Earth emerging in a dark sea in the gray horizon and desert of the Moon.

Half a century later, we remember in BBC World this iconic photo that many consider the photo that changed the way we see the world.

"Suddenly I saw the earth"

"It seems absurd, we had planned everything, but there was no plan at Earthrise"Anders said in" Primeros a la Luna, the story of Apollo 8, "a documentary by director Paul Hildebrandt, released in December in the United States.

During the first orbits to the Moon, the crew was upside down, according to the NASA Web site.

A maneuver allowed the ship to rotate until the astronauts were in their normal position.

The surface of the Moon could be seen clearly, carved in craters that betrayed a history of violent collisions.

"Suddenly I saw the Earth emerging on the lunar surface and without wasting time I started shooting with the camera, "recalled Anders.

Taking photos during the mission was one of Anders' tasks.

"I do not remember who said it all, or if we all said it in unison:" Oh my God, look at it! ", Says Anderson on NASA's website.

"The Earth was emerging, we had never talked about that moment, there were no instructions, I said jokingly," that was not in the plane of flight ", while the other two crew members shouted for me to give them a camera.

"I had the only color camera with a zoom lens. I gave Borman a black-and-white camera and I do not remember what happened to Lovell. "

"We all started shooting without stopping."

Anders drew between 10 and 12 photos, and one of them, which "went very well," was selected for release by NASA.

The Bible of the Moon

Apollo 8 was a historic mission for many reasons.

Its astronauts were the first humans to leave Earth's orbit.

The Apollo 8 was also the first manned mission launched from a Saturn V rocket, the first to include live TV coverage of the lunar surface … and lFirst, transmitIor a reading of the Bible from the Moon.

On December 24, the Apollo 8 crew took turns reading the first ten verses of the first chapter of the book of Genesis, which tells the day of creation.

"In the beginning God created the heavens and the earth," Anders began.

The reading generated controversy and an atheist group even demanded, without success, the government of the United States.

Of course, Anders did not at first imagine the impact his most famous photo would have.

The image is considered by many as one of the catalysts of the environmental movement in the United States.

"And the photo environmental most influential that has ever been"says wildlife photographer Galen Rowell on NASA's Web site.

The image was included in "The 100 Photos That Changed the World" in a special issue of Life magazine and was chosen in 1969 for a postage stamp commemorating Apollo 8.

"I was a teenager when these images were published," the Mexican astronomer told BBC World. Francisco Diegoprofessor at University College, one of the centers of the University of London.

"For me, it has a profound and direct message from two points of view: on the one hand, the unique beauty of our planet, painted blue and white, with brown and green spots here and there. one toias it does not exist in anyúNo other rincorin our sistema sto smell"

"On the other hand, even more important, the overwhelming reality of the terrifying isolation and insignificance of human existence, the fragility of our environment, our atmosphere, our oceans. A planet with limited resources that we must preserve and enjoy wisely"

"A message that unfortunately must be fought to keep alive and present as an essential part of our global culture, because the message has been lost, buried by political and military interests that promote voracious economic systems, aiming at the destruction of this cosmic paradise."

"I did not see any edge"

Earthrise represented in 1968 a vision of hope in the United States in a year marked by opposition to the Vietnam War and the murders of Martin Luther King and Robert Kennedy.

"When I looked at Earth at the time, I saw no boundaries or conflicts," recalled Anders in the documentary "First to the Moon."

50 years later, the blue and fragile planet captured by Anders faces not only wars, but a threat of epic proportions driven by human action, climate change.

Perhaps the birthday helps to see with new eyes the living planet that moved the Apollo 8 astronauts.

An emotion that Anders summed up in a nutshell:

"We went to the Moon to explore the Moon, but what we discovered was Earth."