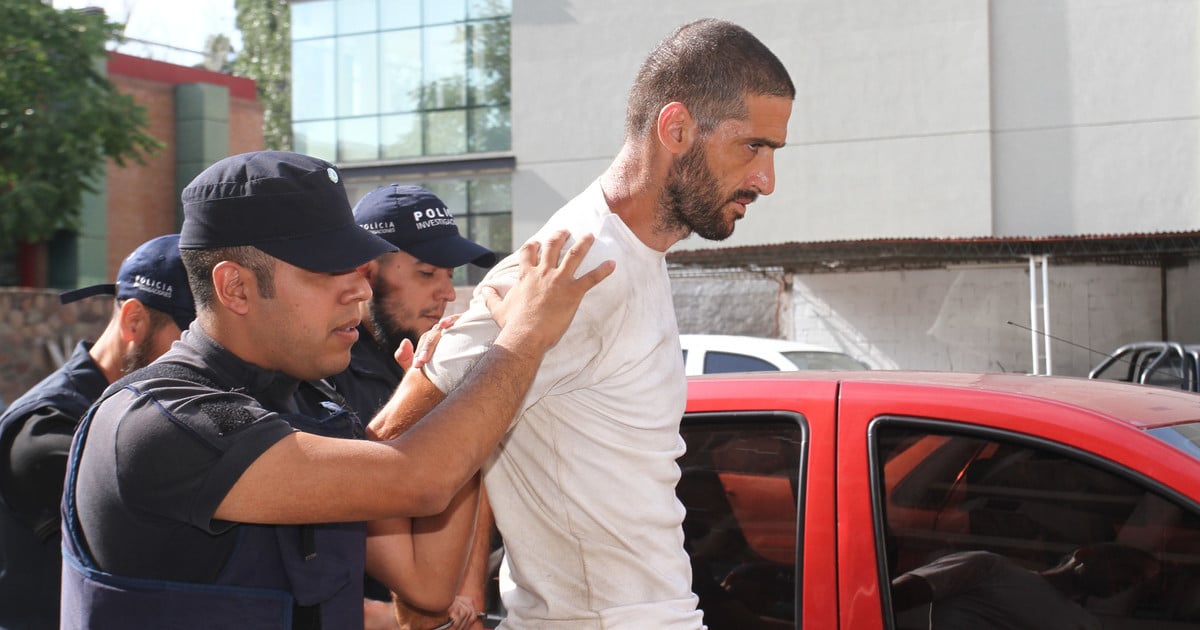 The double crime of Israeli citizens Pyrhia Saroussy (63) and his sister Lily Pereg (54) is solved: they were killed by Nicolás Gil Pereg (37), son of Pyrhia, in the precarious area of ​​Guaymallén (Mendoza), where the Engineer, a former soldier in the Israeli army, lived in a state of destitution.

Gil Pereg is in jail and it is estimated that in about three months he will face a jury trial on the charge of "aggravated homicide" The tests to prove their authorship are overwhelming. And with that, enough and enough for the Justice of Mendoza. However, although the prosecution should not explain the "mobile", outside the courts, the case is far from appearing closed.

The double crime of Guaymallén exposed the strange life of a character, a life that goes beyond the picturesque hermit.

Nicolas Gil Pereg (37), arrested for the crime of his mother and aunt, Israeli tourists.

Despite his disheveled and dirty look, this man who shaved and shaved today is crazy. He legally bought 40 weapons and created 20 commercial companies in just five years. In some of them he appeared as president or director and his mother as a member; in almost every S.A. His pace was fleeting.

The property of Rua Roca, where he lived with his dogs (some dead), cats and three million pesos (dollars and euros) was his refuge, scene of his crimes and also of problems.

Pyrhia Saroussy (63), the Israeli tourist murdered in Mendoza with his sister.

According to the records of the Judiciary of Mendoza, both he and his mother had judgments from the Municipality of Guaymallén to unpaid taxes. He had one and his mother three, in the years of 2012, 2017 and 2018.

In turn, in 2018, Gil Pereg filed a lawsuit for damages against an architect and a construction company for which he claimed two million pesos for "negligence" in a work he planned to carry out in the premises where he lived without services. basic nor furniture.

Lily Pereg, the murdered Israeli tourist, also had Australian nationality. I lived in that country and taught in a university.

This cause ended up deserted by Pereg himself, who He owed $ 70,000 in fees to his lawyer. He did not even find out if his client made an economic settlement with the accused.

According to the migratory records, Gil Pereg he arrived for the first time in Argentina on an Air France flight -of Paris- on December 15, 2007. Thereafter, there were only four crossings to Chile, by land, probably necessary before the filing process was completed.

Although it was thought that his mother had never arrived in Argentina before the trip of January 11, which ended with his horrendous death, in the Migration Board there is a previous visit: He arrived in the country to visit his son on January 19, 2011 and left on February 7 of the same year.

Was it then that Pyrhia signed a power that allowed her to include her in her business? This is a mystery to solve. The truth is that after the departure of his mother, Gil Pereg began its frantic business of opening joint-stock companies.

From Otis to Duglas

Mother and son appear together for the first time in the constitution of Captain Otis S.A., with address in Roca 6087. The social object was "commercial, location and agent."

As of that date, the creations of new corporations are happening almost in the same rhythm as the resignations of Pereg to the position of director. Open one, go from the previous one. Sometimes it does the same day. In 17 of the 20 societies, the mother also appears.

Many not to attract attention. In fact, no one rules out that, regardless of the cause of the homicides, it begins another parallel file to investigate possible money laundering or tax evasion.

It is known that Gil Pereg used these companies to make bad checks. In fact, about 9 million pesos are claimed for this type of fraud. What is also suspect is that he was a "facilitator". With this term is called the person who charges to create companies which then transfers to the real owner.

People who need a corporate structure that distances them from some operation, usually resorting to the acquisition of established companies, but that do not have a certain commercial / commercial direction.

Nicolás Gil Pereg, in front of the well where later they would find the bodies of its mother and aunt. Telam

If someone wants to buy a good with funds generated in an illegal activity (or licit, but not declared) and does not want to appear with the name, buy a company that has already registered another person. The stock transfer is not registered anywhere except in the company books. So you can do what you want and stay relatively hidden.

It may be that Gil Pereg did this with the corporations and also with the weapons that he bought in his name, which now do not appear and which Justice suspects rented or sold on the black market.

Gil Pereg (37), imprisoned for the crimes of his mother and aunt, was accustomed to a well-known arsenal in Mendoza. (The Andes)

One of the questions that can never be answered: how much did Pyrhia know about her son's business?