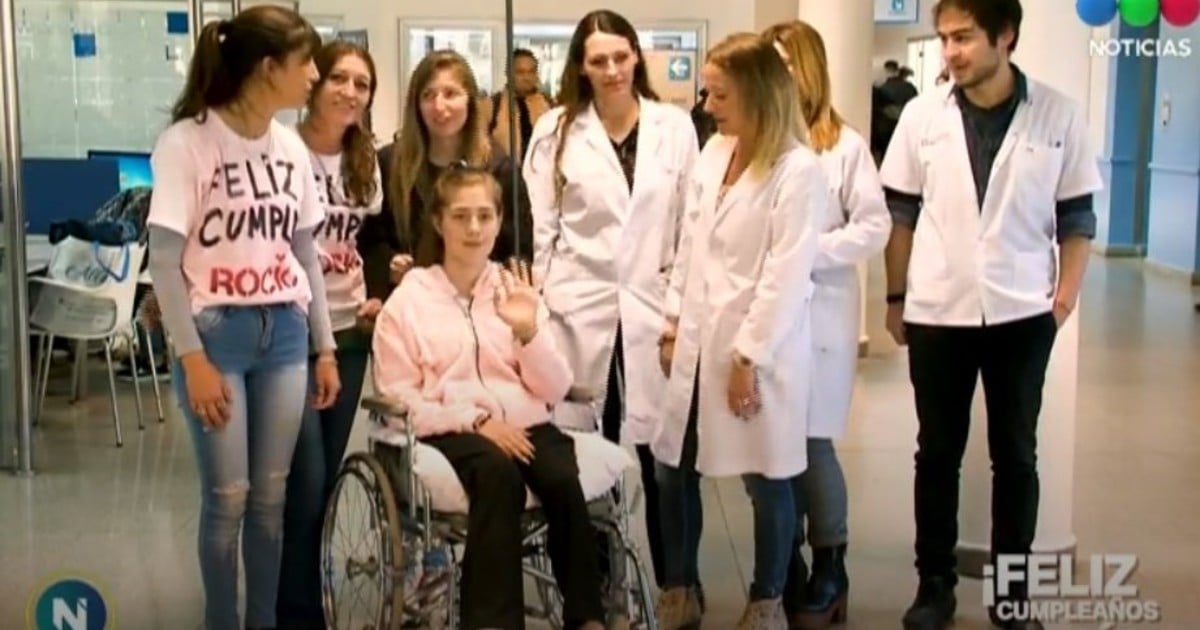 It was a different birthday, atypical, but the most exciting of Rocío Quagliarello's 14 years of life, the only survivor of the police chase in San Miguel del Monte, where three boys and a boy died.

"It's the most important anniversary of your life, because it's like being reborn"he said Clarin the uncle of the teenager, Lucas Sanguinetti.

Rocío celebrated her surrounded by her affections. Of his mother, Loana Sanguinetti, who never stopped being by his side, encouraging her to get out of a very complicated situation, since she was admitted to intensive care and had to undergo three surgeries.

Rocío visited the El Cruce Hospital, Florencio Varela, on the day of his 14th birthday.

And he did this by making a decision that marks what he is as a person: visiting the El Cruce Hospital, Florencio Varela, where he stayed for 24 days. There he thanked the doctors and health professionals who saved his life.

"It's inexplicable what I feel, today I look at it and I feel happy, it's a miracle," Loana said. Telefe.

The house of Rocío, the sole survivor of the mortal persecution in San Miguel del Monte. Photo: Luciano Thieberger.

In addition to celebrating his birthday, Rocío took a big step in his recovery on Thursday. Brackets were removed which had been set to repair the jaw, fractured after the impact of the Spazio Fiat 147 against the trailer of a parked truck.

"He can talk and eat better," his uncle remarked. The teenager does not remember what happened in the early hours of that tragic Monday, May 20.

This Thursday, from the age of 14, relatives and friends of the victims, together with the residents of Monte, will organize a "Festival por lxs pibes", a month after the massacre.

The event, which will include rap, skate and art, will be in the skatepark and will end with a march to Adolfo Alsina square. This place will be renamed "La plaza de lxs pibes".

Regarding the investigation, on Wednesday the promoter of Cañuelas Lisandro Damonte requested the preventive detention of the 12 policemen and a municipal authority arrested by the fatal persecution and its subsequent cover-up.

Now the Silver Guarantees Judge Eduardo Silva Pelozi has a period of five days to resolve the procedural situation of the 13 accused.

In its resolution, Damonte requested that captain Rubén Alberto García, officers Leonardo Daniel Ecilape and Manuel Monreal and sub-survivor Mariano Ibáñez remain detained and accused of "homicide doubly aggravated by the abuse of his role as a member of the police forces and by the use of firearms"

The four are accused of the deaths of Camila López (13), Danilo Sansone (13), Carlos Aníbal Suárez (22) and Gonzalo Domínguez (14); it's the "double degree aggravated manslaughter"From Rocio.

For the investigators, these four policemen are the ones who, with at least two patrol cars, chased and fired at the Fiat 147 on which the boys were traveling, on 20 May. The car, which was driven by Hannibal, eventually collided with the trailer of a truck on the collector of Route 3.

To justice, this group of police arrived after the persecution and made a series of maneuvers that had as purpose make the event happen like a traffic accident.

The latest detainee is Monte's former secretary of security, Claudio Martinez, who is accused of trying to hide the images of security cameras that recorded part of the chase, especially one in which one of the police is seen Take the body out the window to presumably shoot.

Autopsies later revealed that although four of the five died as a result of the injuries produced by the impact, Gonzalo, one of the dead boys, he also had a bullet wound on a buttock.

The incident resulted in a beheading of local police headquarters and a series of marches by relatives, friends and neighbors of the victims, supported by different social and political organizations, who denounced that it was an "easy trigger" case. Investigators are still trying to determine the source of the persecution that led to the massacre.