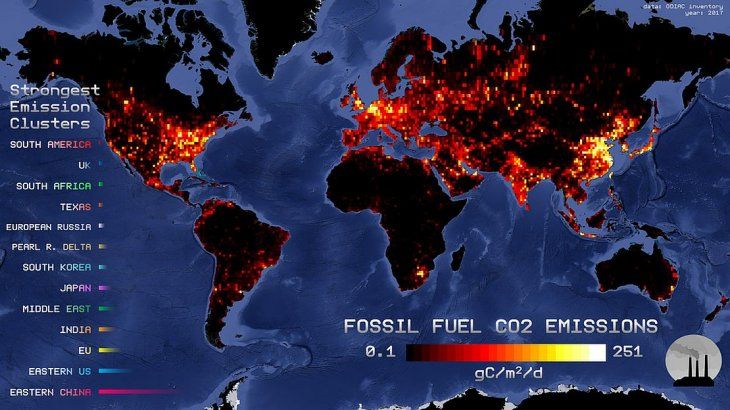 "Our results show that the CO2 level was not as high as today, at least for the last three million years", summarized in dialogue with domain.com the scientist Matteo Willeit, in Potsdam Institute for Climate Impact Research German, one of the co-authors of the document that puts global warming back on the front pages.

"The study itself took a few years, but the development phase of the model to enable such simulations has taken nearly two decades of work,, He explained.

The model was based on astronomical and geological data on Earth's physics and chemistry, took into account orbital cycles and established different scenarios on the evolution of the climate on our planet, from the data of the bottoms of the ocean floor.

After carbon dioxide through the atmosphere.mp4

The specialist explained that "A number of previous studies have attempted to reconstruct the concentrations of CO2 in the atmosphere using different methods.For the past 800,000 years, the level of carbon dioxide is well known from measurements of the ice core in Antarctica.But for the previous period, the reconstructions were of a relatively low quality ".

"Our contribution to understanding the variations of the past is different, as it is based on simulations of models such as ocean temperature and global ice volume in marine sediments.", said Willeit.

The study reveals that the onset of the ice age and glacial cycles were primarily due to a drop in CO2 levels. "In our simulations, the decrease in these levels led to the beginning of glacial-interglacial cycles, with a large growth and decay of the ice sheet in the northern hemisphere about 2.7 million years ago", he added.

The results also show the Earth system's strong sensitivity to relatively small variations in atmospheric CO2. "What the study reveals is that the current increase in carbon dioxide is very fast, it is not natural and unprecedented even when you observe a very long history of climate", alerted.

"It also shows that relatively small changes in long-term emissions have caused substantial changes in climate change", concluded the scientist.

CO2 emissions, related to fossil fuels such as coal and oil, recorded the most important increase in seven years in 2018. According to the annual report presented on the sidelines of the UN Climate Summit in Poland last December, 2.7% in relation to 2017.

At the same time, the Intergovernmental Panel on Climate Change He warned that during the last decade there has been a unprecedented storms, forest fires, droughts, heat waves and floods around the world.

If emissions are not reduced, experts said: at that rate, the dreaded 2 ° increase in temperature could be achieved in just 11 years and almost certainly within 20. In any case, no action will take immediate effect: it is estimated that every pound of CO2 released into the atmosphere in the last 100 years will continue to trap heat for centuries.