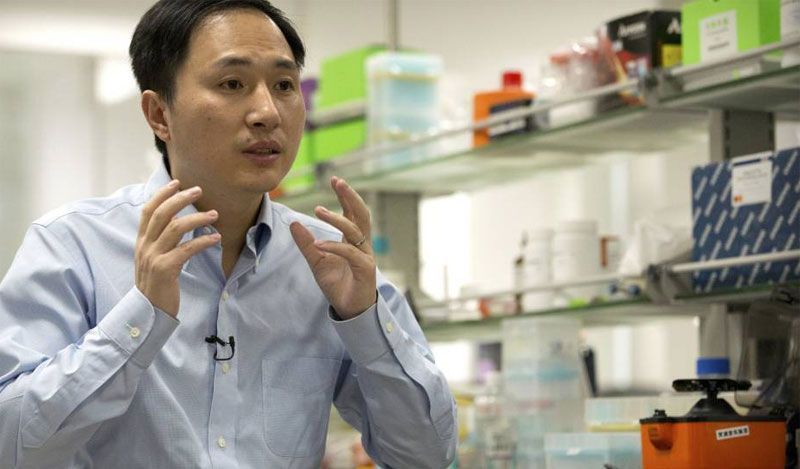 A Chinese scientist, He Jiankui, and his team claim to have created the first genetically modified babies. The babies, Lulu and Nana, two girls born "several weeks ago", are in perfect health, says geneticist He Jiankui, who used the gene-editing technique known as CRISPR to turn a gene and make small resistant against the virus that causes AIDS.

The controversial statement by He, a researcher at SUSTech (Shenzhen University of Science and Technology of China) in Shenzhen, could not be contrasted. The research was not published in any specialized scientific journal, where it should have been submitted to the analysis of other specialists. And the Shenzhen scientific authorities, according to the Beijing News, claim that they never received the required permit application to conduct the test, so they opened an investigation.

SUSUSTech herself declared herself "deeply shocked" by this announcement and specified that he has been on leave since February. His research was not communicated to the University or its Department, the Department of Biology, which "was unaware of this research project and its nature," the academic center said in a statement. The Academic Committee of the department "believes that Dr. He Jiankui's behavior in using CRISPR / Cas9 to edit human embryos has seriously violated codes of ethics and academic conduct."

The University will set up an independent committee to investigate this incident and will disclose its findings to the public, the statement said.

In a video posted on YouTube, a smile He explains from a laboratory that "two adorable Chinese twins, Lulu and Nana, have been born in recent weeks in excellent health, to the joy of their mother, Grace and her father Mark." father, he says, is a carrier of the human immunodeficiency virus (HIV), which causes AIDS, and he never thought he could procreate.

According to the expert, who is in Hong Kong this week to attend a conference on the ethics of genetic manipulation, girls were conceived by artificial insemination. After fertilization, the scientific team injected into the implant CRISPR reagents, a kind of precision molecular scissors, to inactivate the CCR5 gene. The goal was to modify the gene that the virus uses as a gateway to enter the human immune system.

"If this is true, this experiment is monstrous, the embryos were healthy, no known diseases, genetic editing is experimental and is still associated with undesirable mutations, capable of causing genetic problems in the early and later stages of life, including development of cancer, "says Julian Savulescu, a professor at Oxford University

Throughout the development of the embryos, first in the laboratory and then implanted in the womb of their mother, the specialists verified several times, sequencing the genetic code of the creatures, that everything was developing as it should and the girls did not present more mutations than the planned one " No other gene has changed, "he says. The check was repeated after birth, originally announced in an exclusive interview with the AP and an article in the MIT Technology Review.

The geneticist, who graduated in the United States and returned to China as part of a program to attract educated talent abroad, says he is aware of the controversy his initiative will arouse. But, he says, it does not seem to present ethical problems. All he did, he says, is "to open up an equal opportunity to have healthy families."

And the criticism has already begun to rain. The test would have been impossible under US law and illegal under European standards. But in China the regulations are not so strict. This country was the first to modify genes of human (non-viable) embryos and of monkeys with CRISPR. A 2003 ministerial directive prohibits the implantation of the pregnancy of genetically modified human embryos, but it is only a directive, not a law.

Professor Julian Savulescu, director of the Uehiro Center for Practical Ethics at the University of Oxford, told the Science Media Center that "if this is true, this experiment is monstrous." "Genetic editing itself is experimental and is still associated with undesired mutations that are capable of causing genetic problems in the early and later stages of life, including the development of cancer." there are already far more effective ways to prevent AIDS, including protected sex, and even if the syndrome is contracted, effective treatments now exist. "This experiment exposes normal, healthy children to the risks of genetic editing in exchange for no real benefit needed."

According to Savulescu, the experiment "contradicts decades of ethical consensus and guidelines on protecting human participants in research evidence." Babies resulting from the He tests are being used as genetic guinea pigs. This is a Russian roulette genetics. "

He, on the other hand, recalls the criticism that has rained over the birth of Louise Brown, the first child conceived through in vitro fertilization (IVF). His technique, he argues, is "another breakthrough in IVF," which will be applied only to a small number of families affected by an illness.

"It's not about raising raised babies, just a healthy child," he says. It does not seek to "improve intelligence, change eye color, appearance or something similar. According to him, his method "may be the only way to cure some disease".

"I understand that my work will be controversial, but I think families need this technology, and I am willing to accept criticism," says He, who emphasizes that he himself is the father of two daughters. "I can not think of a healthier or more beautiful gift for society than giving a couple the opportunity to start a family full of love."

On his laboratory site, he says that his team and he worked "for several years" by editing the genomes of unviable mice, monkeys, and human embryos. This page includes translations in English of the forms to solicit the consent of the volunteer couples participating in the experiment, as well as the permission of the Ethics Committee of the HarMoniCare Hospital for Women and Children in Shenzhen. "We are very interested in engaging with patient and regulatory communities to discuss how to define, direct, and restrict the ethical use of genetic surgery in the early stages of life."