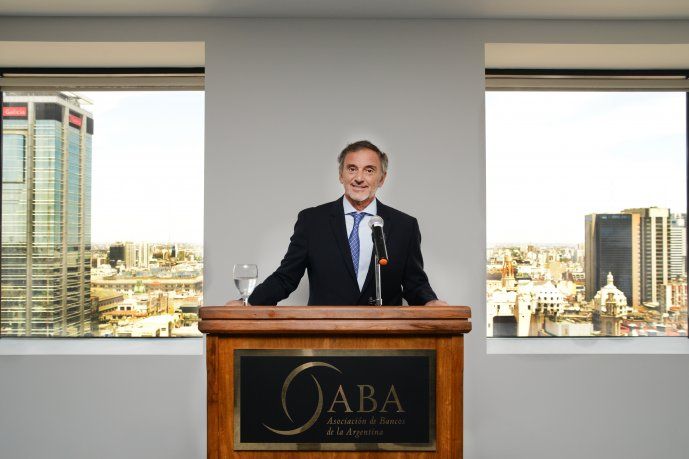 As part of ABA's end-of-year gift, Cesario emphasized that this year was "difficult" for the Argentine economy due to three factors: drought, rising rates in the US and the trade war with China; of rye notebooks. And analyzed the "Perfect storm" left with two agreements with the IMF and with three presidents of the Central Bank.

The owner of ABA pointed out that "The first results of the zero deficit plan and the monetary policy restrictions implemented" by the Minister of Economy, Nicolás Dujovne, and the president of the BCRA, Guido Sandleris. "We can say that we have gone through the crisis, but we have had to resort to international aid to tackle imbalances and change policies to stabilize the main variables of the economy," he said.

To describe the year from the banks' point of view, Cesario noted that "in the first half of the year the challenge was to meet the demand for credit, both commercial and consumer," and that in the second half of the contractionary monetary policy " by credit ".

For Cesario the economic "shocks" of 2018 "They were a good test for the system." "The good news is that the financial system proved to be solid, solvent and liquid, but above all, it proved to be reliable. It honored each and every one of its commitments," he said.

Among the participants of the cocktail linked to the financial system was the approval of the decision of the Central Bank to eliminate the floor of 60% for the rate, and there was also consensus on the expectation of a downward inflation that will imply a rate that also falls. "In addition to the fact that the rate has to fall, it is important that the real rate is positive, that is, that is 5 or 7 points above inflation to encourage deposits," said a senior banking executive.

"What Central is doing is what needs to be done, there are not much more roads left"another executive said. The majority of those present showed confidence that economic variables will continue to converge to resume the path of growth "between March and April".

In relation to growth, Cesario spoke in an electoral key and maintained that "The government and, eventually, whoever may happen, it should be clear that the way forward must be consistent with the changes implemented if we are to grow and develop sustainably". He also called for the "responsibility" of political parties to generate predictability even in the election year to grow the economy.

The president of the ABA stated that "The challenge is to make the financial system grow" and advocated "recreating the capital market". "The investments will come if we all work for it." And that leaves a preponderant role for the government, the opposition and, as I said, all sectors of the economy. You have heard me say that, but it is important to repeat it, the solution is not to ask for or grant subsidies between the different private actors of the economy, who generally penalize efficient sectors in favor of the inefficient, "Cesario said.

In this regard, he assured that "the competitiveness debate can not ignore the fact that the tax pressure is what most affects it". This causes many sectors to lose opportunities, remain out of the market and have no formal job creation. A tax pressure of 38% scares or discourages any investment opportunity. "