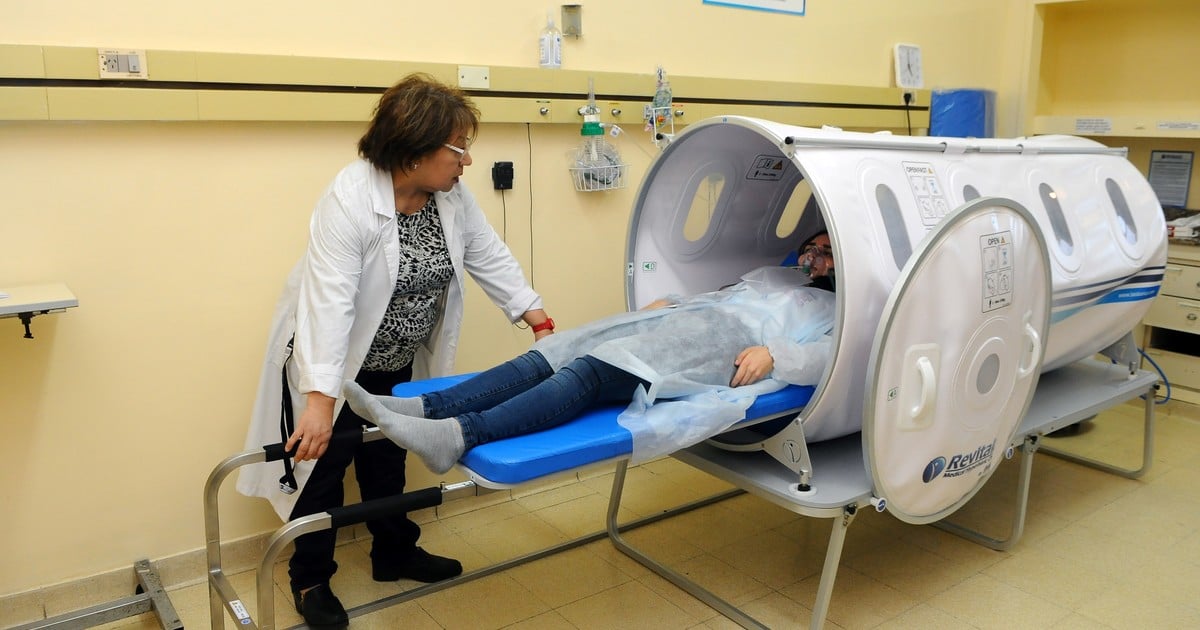 Guillermo Britez Neira (27) was 3,800 meters high, in Cerro Pedro Zanni, in Mendoza, when He began to feel "very cold on his feet". He waited to get to base camp to take off his boots: in doing so, he realized that I had five frozen fingers. In the hospital of Uspallata, he was told that three "yes or no" had to be cut and that there was the possibility of recovering part of the other two. With five fingers white and unresponsive, this professor of physical education and mountaineering returned with urgency to Buenos Aires. "I started to take vasodilators and consult several doctors, they told me that we had to see the evolution in six months and then to define how much to amputate.I did not want to lose them," says Guillermo, who on his desperate journey arrived at the Arturo Municipal Hospital Illia, better known as the Hospital de Quemados, where he managed to save all his fingers. A hyperbaric chamber, which has been operating for some months in the health center, has to do with recovery, according to experts. It is the first public hospital to "repair the tissues" in this way.

Soccer players use to "acclimatise" before a match in height and there are also beautification treatments in which they use hyperbaric chambers. In addition, little is known about the possibilities he has of improving and healing damaged skin. To work burns, ice or radiation and acute wounds both acute and chronic.

The camera looks like the fuselage of a miniature plane, is two feet long by two inches in diameter. The patient is on a stretcher, located in the interior, with an oxygen mask. The therapy lasts an hour: it does not hurt, but it can generate discomfort in the ears like the sense during the takeoff of a flight..

Dr. Mercedes Portas, from Hospital de Quemados, together with her patient Laura Cappa in the hyperbaric chamber. Photo: Diego Waldmann

The atmosphere is pressurized with air until it reaches 1.45 atmospheres (it is normal to be in an atmosphere). The rest looks magical, although it has its scientific explanation. "By increasing atmospheric pressure, oxygen reaches all tissues and cells, regardless of circulation. This means that it comes just like places where the arteries are damaged or obstructed. This makes the tissues repair faster, "he says in a Clarin Mercedes Portas, head of the Department of Plastic Surgery and Burns Hospital. And he points out that in some cases, using the camera helps the person to recover in less than half the expected time.

Mariana Cannellotto, clinical doctor and president of the Argentine Association of Medicine and Hyperbaric Research, adds that reducing the healing time also reduces the risk of superinfection.

The hyperbaric chamber from within.
Photo: Diego Waldmann

The case of Guillermo serves as an example. He saw his fingers go from white to black.. "I was very scared, I thought that having them dark was worse, that they had definitely died, but not," recalls Guillermo, who was once encouraged to remove part of that burnt skin and found that beneath it was "the divine rose" . Study for mountain guide and make sure that this episode will not stop: "In the next I will be more careful with shoes."

Guillermo Britez Neira (27) can lose five fingers of an ice burn at Cerro Pedro Zanni in Mendoza. In the end, it was not necessary to amputate. Photo: Diego Waldmann

Laura Cappa (28) arrived at Hospital de Quemados with the first phalanx of two severed fingers. "I'm a baker, I make cakes, but I decided to help my husband in his metallurgy," he says. "The accident happened when he cut metal plate with a guillotine. I had some gloves that were not the right ones, I put my fingers in inadvertently. With the gloves came part of the fingers and a lot of blood"He says.

Laura Cappa (28) cut off part of the fingers of a hand in a work accident. At Quemados Hospital, it was operated and grafted. Was treated with the camera. Photo: Diego Waldmann

At Santamarina Hospital in Monte Grande they sewed it, but the wound began to grow dark. Concerned and at the recommendation of a friend, she arrived at the Hospital de Quemados. "I signed the consent to have everything amputated, if necessary." In the end, this did not happen.With a treatment based on platelet-rich plasma and the hyperbaric chamber, I saved the second phalanx, and they grafted my fingers to the skin of the my arm, I'm very grateful, "adds Laura.

María Alejandra Ramírez (51) is still under treatment. Try to perform a breast reconstruction after a cancer. Photo: Diego Waldmann

"It occurred to my husband that the irradiated skin was burnt skin. That's how I got to this hospital", says María Alejandra Ramírez (51). She is a teacher, lives in Vicente Lopez and in 2013 she discovered having a malignant tumor in one of her breasts. "At the annual gynecological examination, I found out, they took me a bit, I had radiation therapy and medication, I continued well until December 2016 when I had a relapse," he explains. "The cancer came back and decided to have a mastectomy. After a few months I had a prosthesis for breast reconstruction, but the area never finished healing", Details of María Alejandra. He had a bad time: the irradiated skin was sutured nine times. "It's not just going through the physical, it's also very strong," he says.

As her husband suspected, What she had was a kind of burn. "They treated me with the hyperbaric chamber, improved the skin, the scar and reduced the inflammation, but also decided to remove the prosthesis, now I'm going to do a few more sessions on the camera and, with good skin, I'm going to intervene again. is to use abdominal fat for reconstruction, "says María Alejandra. "After going through a disease like this one must close the wound, in all its levels," he concludes.