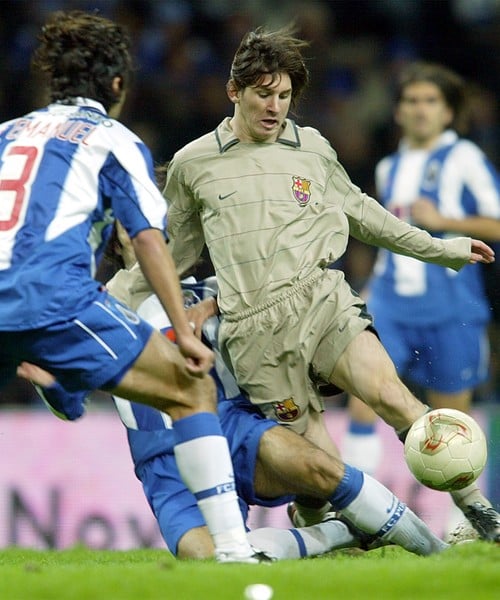 On November 16, 2003 was remembered in the world of football as the day of the opening of Estádio Do Dragão, Porto's new home in a friendly against Barcelona. But this ephemeral came into the background: That night not only the new Portuguese house was presented, but also a child in the Cines, a Lionel Messi.

La Pulga, 16, traveled to Portugal along with five other members of the Inferior Blaugranas. None of them had climbed the team's first plane, then led by Frank Rijkaard and captained by Luis Enrique. Indeed, Messi had not yet trained with the elders. The Dutch coach and the Argentinian met at the airport.

See also: "If Messi does not come back, we're in the oven"

The match, in the midst of FIFA, was the perfect opportunity to test the new talent, although the rival was important: trained by José Mourinho, they were the current winners of the Uefa Cup and that season they would win the Champions Leaguecompetition to which Barsa did not qualify.

See also: "Messi can beat him who does not complain"

The Portuguese they won by 2 to 0 before a Barcelona that he formed with men like Jorquera, Oleguer, Gabri and Sergio Santamaría. Ronaldinho, the rookie Brazilian star, was in his country recovering from an injury.

The day of Messi's debut in Barcelona. vs Mourinho

The rosary entered the game in the 75th minute, replacing Fernando Navarro. His shirt number was a premonition: the future winner of five gold balls played that night with 14 in the back, a number that in the club automatically resembles the figure of Johan Cruyff.

It did not take long for Messi's talent to emerge, capable of producing two good chances in just 15 minutes, something that did not go unnoticed by Rijkaard. "You can clearly see that he has quality, that he is a player with a promising future"guaranteed the Dutch after the game. However, Leo did not debut in the official competition until the following season.

See also: The Selection and the friends club of … Maluma!

In addition, the 10 continues pulverizing numerous records in the Catalan cast. He is the club history scorer with 566 goals in 650 games; he also has, at 91, the record of goals scored in a calendar year and is the highest scorer of all time in the major European leagues.

See also: Messi puts the clothes of the marker

To remember that important date in its history, Barcelona shared in its social networks a video in which Lio himself tells how he lived this meeting.

Fifteen years after its presentation, the Blaugranas published a video in which La Pulga recalls this game against Porto (video: @FCBarcelona_es).