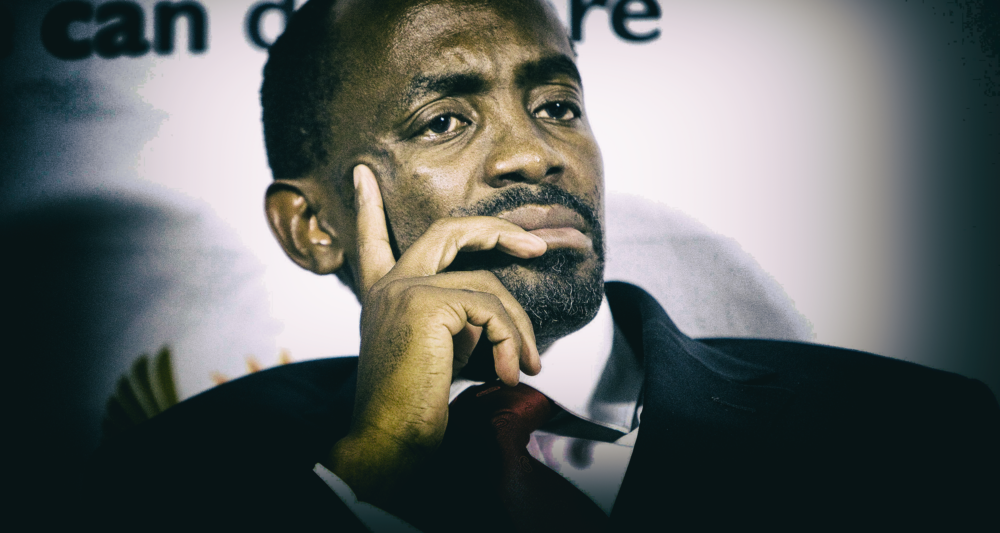 Former national prosecutor Menzi Simelane dismissed the Bosasa case as "contaminated," for several reasons, just months after his appointment to the post.

In February 2010, three months later, former National Director of Public Prosecutor Menzi Simelane told former prosecutor Glynnis Breytenbach to withdraw his staff from the Bosasa case after the Special Investigations Unit delivered the findings of its two-year investigation by crimes. investigation and prosecution.

The exchange between Simelane and Breytenbach is part of a series of documents that Bosasa allegedly bought from corrupt NPA officials and then gave the company an edge over all possible legal tactics available to crush the criminal investigation into the company.

The documents contained updates and timelines on the criminal investigation, and revealed the identity of the prosecutors, and one in particular, a memo from Simelane for Ministers Jeff Radebe and Nosiviwe Mapisa-Ngaqula.

The memo was filled with phrases implying racism on the part of the investigators that it was a witch hunt based on political revenge and that the investigation had been "contaminated." In short, the prospect of a successful process was "hopeless."

All of this made for ammunition useful for Bosasa's politically supported struggle against the indictment for four tainted Correctional Services agreements, the State Capture Commission heard on Monday.

Witnessing Supreme Court Vice President Raymond Zondo, Clinton Oellermann, a former senior investigator on the Bosasa case at SIU, said the leaked documents provided valuable information to attack the lawsuit and any subsequent proceedings they might have taken.

The NPA actually sat in this case for a full 10 years – the first arrests were made in February 2019, shortly after former COO Angelo Agrizzi of Bosasa had completed his first testimony before the commission.

Agrizzi handed the leaked documents to the commission as part of his testimony about how the company allegedly paid NPA staff to extract information about the status of the case.

One of those accused of allegedly helping Bosasa in his efforts is ancient NPA Secretary Jackie Lepinka, who reportedly received R20, 000 per month in exchange for information.

They show that Simelane said at the March 2010 meeting that the Bosasa case did not contain water, that the SIU investigation had not been conducted with proper administration of justice, without fear, favor or prejudice, essentially implying that it had been a witches, the commission. heard.

Oellermann, a forensic investigator with more than 25 years of experience, told the commission that Simelane's allegations of a contaminated investigation were not true and not fair.

He said he and the eight or so members of his team had no reason to pursue the company for invalid reasons and rejected claims that it was motivated by a racial agenda.

Simelane's memo referred to two white investigators, but Oellermann said his team was made up of men and women, whites and blacks.

The SIU investigation was triggered by a presidential proclamation issued in 2004 and expanded in 2007.

The outcome of 2009 was extremely damaging, noting that, among other things, the four Bosasa businesses the team was allowed to investigate were packed with bids and bonuses for former Correctional Services chief Patrick Gillingham.

Although the SIU was not advanced enough to investigate the involvement of former Correctional Services Commissioner Linda Mti, it has gathered sufficient evidence to signal it for further investigation by law enforcement.

The law requires that the findings and recommendations of IUS affairs be turned over to the NPA for investigations and prosecutions.

Asked about Simelane's comments to the ministerial briefing, Oellermann questioned how Simelane might have come to judge the admissibility of the IUS information as evidence shortly after the information was delivered to the NPA.

The commission heard that the two ministers were essentially informed by Simelane that the prospect of a successful trial was "hopeless" and that the case should not continue.

Oellermann testified that although Bosasa appeared to have had a heads-up in his investigation, all evidence was collected within the bounds of the SIU Law.

The company, for example, approached the SIU when it learned of a plan to conduct a search and seizure of digital equipment in Bosasa's offices.

Through its lawyers, Bosasa has requested a meeting to mark a date for a digital and forensic mirror image of the company's servers. Earlier testimony clarified how Bosasa delayed this search for about a week, during which thousands of files were deleted using special software.

Oellermann said the spreading of documents that landed with Bosasa was not "random" but an effective material selection.

They were distinct in that they provided insight into the gaps in the criminal investigation process and allowed Bosasa to follow the different stages of the investigation.

The SIU report, delivered to the NPA in 2009, gathered dust until Agrizzi hit the witness bench in the State Capture Commission.

He was arrested along with several former colleagues (commission witnesses) as well as Gillingham and Mti.

They face charges of fraud, corruption and money laundering and are all on bail.

The decade-long report found irregularities in a broad spectrum of four contracts, commonly called the Bosasa kitchen agreement, an agreement with CCTV, a fencing contract, and one for the installation of televisions in in-house cells.

The investigation found that the contracts were awarded irregularly by Correctional Services, in some cases with the help of Gillingham, who had worked with Bosasa to develop the tender specifications in exchange for cash or other bonuses.

Bosasa's wave of corruption did not end at the first sign of trouble in 2009. The company continued to do business with the government until recently, and Agrizzi's prior testimony exposed a $ 70 million incentive scheme through deals and extensions. of contracts and political coverage against criminal investigations that allegedly ran all the way to the office of former President Jacob Zuma.

Judge Zondo told Oellermann that he asked the commission's staff to establish what gave rise to the recent arrest of Agrizzi and some of the other witnesses.

He wants to examine the reason for his arrests, given the timeline and why they are currently helping the commission.

Judge Zondo says that it was ensured that the prisons were not linked to his appearance before the commission and, strangely, not in connection with the dated SIU report.

But Oellermann said his analysis of the sketch of the indictment shows that, in addition to one or two additions, the arrests seem to relate, in essence, to the 2009 case.

Oellermann said he did not have an explanation for the reason for the delay in the execution of the prisons.

Under normal circumstances, certain procedural processes would need to be triggered for the documents to be opened and for the actual collection of suspects.

"This may have taken some time, but 10 years? I have never encountered a criminal investigation of this nature that has taken so long, "said Oellermann.

"The evidence was reasonably concentrated, reasonably clear. And, in light of the quality of the evidence and the nature of the findings, can there be any rational basis for a 10-year delay? "

"In my opinion, no, "said Oellermann.

The commission resumes Tuesday with the testimony of the investigator Patrick Mlambo and the return of the former employee of Bosasa Richard le Roux on the security facilities financed by Bosasa in the homes of the main ANC politicians and former president of SAA Dudu Myeni. DM

No, not really. But now that we have your attention, we want to tell you a little bit about what happened at SARS.

Tom Moyane and his companions bequeathed South Africa with a R $ 40 billion of fiscal deficitin February 2018. It is the only thing that grew under Moyane's mandate … the previous year, the hole had been $ 30.7 billion. And to fund these deficits, do you know who has to pay? You – the South African taxpayer.

It was the excellent work of a team of investigative journalists, Pauli van Wyk and Marianne Thamm of Scorpio along with our great friends in Bhungane, who caused the SARS captors to finally be eliminated from the system. Moyane, Makwakwa … their mounds … are gone.

But Our work is not over yet.. We need more readers to become Maverick Insiders, friends who will help ensure that many more investigations arrive. The contributions go directly to the growth of our editorial team and to ensure that Daily Maverick and Scorpio have a sustainable future. We can not rely on advertising and we do not want to restrict access only to those who can pay for a paywall subscription. The association is more than just contributing financially – it's about how we stand for the truth together.

So if you feel inclined, and would like a way to support the cause, please join our community of Maverick Insiders…. you could see this as the opposite of a sin tax. And if you're already the Maverick Insider, talk to your mother, call a friend, whisper to your beloved, yell to your boss, write to a stranger, advertise on your social network. The battle for the future of South Africa is underway and You can be part of this..