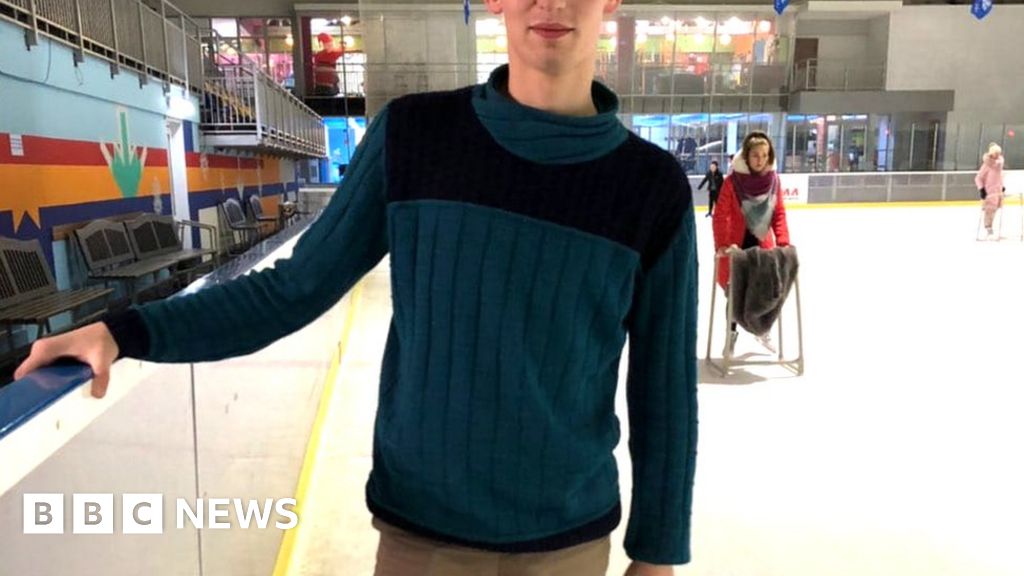 Until recently, health authorities thought they had almost eliminated measles from Europe. But now the potentially fatal disease is increasing due to a dramatic drop in vaccination rates. The worst is Ukraine, which suffers the worst measles epidemic in the world, with more than 100,000 cases since 2017.

On a fall day in 2017, Oksana Butenko said goodbye to his teenage son, Serhiy, when he left for university to study and become a doctor.

Eighteen months later, in February of this year, she brought her body back to her small village in western Ukraine in a coffin.

The young man who wanted to dedicate his life to the cure of diseases died at the age of 18, suddenly, because of a disease that the health authorities say is completely preventable – measles, a disease they thought a few years ago almost eradicated Europe.

"He was a brilliant boy," says Oksana, standing outside the small silver-domed church where his son's funeral was held. "He was the most precious thing I ever had. It was his dream to become a doctor, that's what he lived for.

"I do not know why this happened. I remember my childhood, everyone took measles, but they all recovered."

Measles is a highly contagious disease that most people suffer after a few weeks of high temperature and a nasty rash. But in some cases – one or two in a thousand – it leads to fatal complications, most commonly pneumonia.

Serhiy died of pneumonia caused by measles after several days on intensive treatment, infection eating his lungs, unable to breathe without artificial ventilation.

He was one of 39 people who died of measles in Ukraine since the beginning of the current outbreak in 2017.

Measles has increased across Europe, with new cases tripling last year to 82,596. Most of them were in Ukraine, with 53,218 taking the disease.

"We have this perfect storm of what has happened over the last 40 years and culminated in the problem we have now," says Ulana Suprun, the country's health minister. She is talking about the dramatic decline in the proportion of people who are protected against measles by vaccination.

Until about 2001, she says, Ukraine imported a vaccine strain from Russia that the World Health Organization (WHO) later declared ineffective. As a result, "about 44% of measles cases in Ukraine are adults – adults who thought they had been vaccinated, but the vaccine was not helpful."

Then there was a problem with the cold chain – keeping the vaccine chilled so that it remains effective. Amid the economic collapse that followed the breakup of the Soviet Union in 1991, with ill-equipped hospitals and unreliable sources of energy, the vaccine was not always kept at the right temperature.

But an even bigger problem was psychological. Over the years, more and more people have refused vaccination for themselves or their children.

"It's a matter of trust," says Oles Pohranychny, the head of a private elementary school in Lviv. Two years after the outbreak, only half of its students are vaccinated against measles.

"The vaccine is something I take, and I believe it will protect me from something." Now our school has children born to parents born in the 1990s, when no one believed in anything, not one another, no medicine, no state.

"Throughout the former Soviet Union, it was a period of transition from a paternalistic society to a society where you are responsible for yourself – but you do not know how to be responsible for yourself. Everyone was lying – that's what people I thought of the '90s. You had to be like a fist and not trust anyone, otherwise you were a loser, trust was for the losers.

Dr Suprun, the health minister, blames the media and politicians for shaking the vaccination mood, particularly after an incident widely publicized in 2008 when a student named Anton Tishchenko died shortly after being immunized against measles – although a medical report has shown that his death was not related to the vaccine.

Hear Dying of mistrust in Ukraine, Tim Whewell's report for the BBC World Service award program on the BBC iPlayer

In the wake of this tragedy, vaccination rates fell so drastically that by 2016 only 31% of the population was covered by MMR, the primary vaccine against measles, mumps and rubella – the lowest vaccination level in the world, still lower than in Africa. , as Dr. Suprun put it.

WHO recommends that 95% of children be immunized with the MMR vaccine to achieve the level of herd immunity in which all children – vaccinated and not vaccinated – are protected against measles, mumps and rubella.

Dr. Suprun says that even now she is struggling with a wave of misinformation. "We have politicians trying to get votes saying that you do not need to be vaccinated, it's all a big plot of Western governments to take care of our children, that the vaccine is a great plan of pharmaceutical companies to come and make big money out of Ukraine. Unfortunately, even with 39 deaths, it's hard to convince people that this is a real problem. "

Serhiy Butenko's death, however, shook his colleagues at the University of Medicine in Vinnitsa, central Ukraine.

"There was a sense of emptiness," says Oleh Yefymenko, head of the student council. "A lot of people knew him, his story really touched everyone."

Medical records show that Serhiy had been vaccinated at the age of one and six years, as recommended by health authorities. But it was not enough to protect him because he caught the measles virus soon after becoming ill with another viral disease – mononucleosis or glandular fever.

"This mononucleosis weakened his immune system so he could not fight adequately against the measles virus," says Alexandra Popovich, who oversaw Serhiy's treatment in his last days.

It is possible that he was more protected if he had received a recent vaccine booster.

But the most important lesson to be drawn from the tragedy, says Dr. Popovich, is that Serhiy would not have died had he not been exposed to measles if the level of immunity of herd population had been high enough.

After Serhiy's death, many of his colleagues rushed to get vaccinated, according to student leader Oleg Yeminenko.

But how come medical students, future doctors, had not thought of this before? At that time, the outbreak of measles had lasted almost two years.

University officials told the BBC they conducted a major campaign last year to encourage students to be attacked and achieved a vaccination rate of more than 98 percent.

They said that students are taught about vaccination "from the point of view of evidence-based medicine, by studying immunology, statistical data, contraindications and consequences."

But Kateryna Bulavinova, of the United Nations agency for children UNICEF, who has been helping the Ukrainian government in the fight against measles, said that Serhiy Butenko's death showed that university deans are not doing enough in general to protect students.

"In my personal opinion, this is a horrible situation because it was preventable," she said. "For me, it's a great mystery, because it's the third year of outbreak in Ukraine with large numbers of those who get measles. But still the rectors of all medical universities have not taken a stand on student protection."

She says some student doctors learn that vaccines are not needed. Reasoning is the belief that it is better for a child to contract the disease because then they will have immunity for the rest of their lives. "When you have academics at that level teaching new doctors that they do not need to vaccinate children, that really confuses the issue," says Dr. Suprun.

"We have teachers who believe that measles vaccination during the flu season from October to May, for example, is a dangerous procedure because it will cause immunosuppression. myth, false information. It is dangerous for the country. "

Dr. Suprun says that misinformation by health professionals and medical academics can not be stopped because universities are independent and there is currently no way to withdraw professional qualifications. But a system for licensing physicians that will make this possible is being introduced now.

She says many of the problems that have led to the epidemic are being overcome. Vaccines are purchased by Unicef, which has helped the government visit hospitals and clinics to ensure the maintenance of the cold chain.

"The vaccines that have been given in the last year or two, we know they worked," she says. "We vaccinated more than 900,000 people last year and did not have zero deaths or serious complications from the vaccine."

The mobile vaccination brigades went through the regions most affected by the epidemic to immunize the children who lost the jab. Free vaccination is also now available for all adults.

Last year, 90 percent of children one and six years old were vaccinated against measles. But this still leaves a huge backlog of children and adults who have not been vaccinated at the right time in previous years.

And Unicef ​​estimates that up to 30% of vaccination certificates can be counterfeit.

"When parents are informed that it is necessary to vaccinate their children for them to come to schools, they go to doctors and unfortunately buy vaccination certificates," says Dr. Suprun.

In the Lviv region, the most affected, she says, "when we entered the (regional) health department and asked them how many children will need to be vaccinated, they told us that their records are 22,000.When we went to In schools, and we checked which records were accurate, we found that there were 50,000 children who needed to be vaccinated, because 28,000 had fake vaccine certificates. "

By law, Ukrainian children have to be vaccinated against certain diseases, including measles, to attend public schools. But the law is not always observed, and is also contested by some parents, including Veronika Sidorenko, founder of a movement called "Vaccinacion Libre Escolha".

Her three children are not vaccinated. "When I compared the risk of contracting the disease, against which we vaccinated, and the risk of the consequences of the vaccination, I decided not to vaccinate," she says.

According to the WHO, the risk of suffering a severe allergic reaction to the measles virus is one in a million. But Veronika is suspicious of WHO statistics. She thinks the campaign for universal vaccination is driven in part by the pharmaceutical industry lobby.

"If we had a large-scale research – say 1,000 unvaccinated children and 1,000 vaccinated children, and we could trace their lives for 50 years – we could really say that [vaccination prevents measles outbreaks]. But we do not have this and no one is going to do it, so I believe we can not say for sure. "

When challenged that her choices are putting other children in danger, she claims not to believe in herd immunity.

Meanwhile, the epidemic in Ukraine continues to pick up, with almost as many new cases in the last six months as in the whole of last year. The 39th measles complication victim died this month.

"This is the era of iPhones and all kinds of high-tech," says Kateryna Bulavinova of Unicef.

"Having such a high number of people dying of a completely preventable disease is horrible."

The battle to persuade the people of Pakistan about the benefits of polio vaccination – in one of only three countries where the disease is still plentiful.