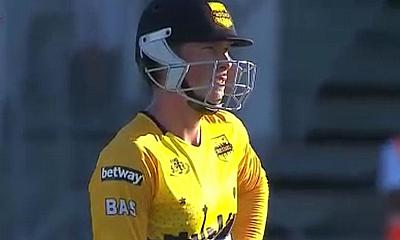 The second T20I was almost a repeat of the opening of the series, as Pakistan fell short of the goal pursued by South Africa.

Reeza Hendricks and Janneman Malan gave a solid start to the team, but both scored around a ball and acceleration was needed. It was supplied perfectly by Rassie van der Dussen and Captain David Miller. Miller, in particular, criticized the formation of Pakistani bowling with four-and-five-six.

Pursuing a goal of 189, Pakistan had a solid start for Babar Azam, who seemed to be in full control before being fired by Beruan Hendricks. Hussain Talat also scored half a century, but was a bit slow to get out of the blocks.

It was at one point that Pakistan overtook the goal comfortably, but that did not happen because the middle order did not contribute and the team fell short of the seven races.

Usman Shinwari is having problems with his past delivery and made some balls in the last game. For South Africa, many of its players are contributing to the cause of the team. Chris Morris took two wickets in the last game, while Andile Phehlukwayo was the choice of three wickets.

With the series lost, Pakistan would definitely like to end the tour on a high. If they hit first and try to change things a little, the result can also be different.

Let's take a look at the likely XI game of both teams.

Who will win? – Pakistan

* NB, these predictions can be changed closer to the start of the game as soon as the final teams are announced and we will be running the In-Game features soon, so stay tuned.